Changing light bulbs, fixing plumbing, watering flowers, taking out the trash and bringing in the mail are the type of tasks most people consider simple chores, but to Gibson's neighbours his willingness to lend a hand makes him an "angel."

'For me he's an angel,' says 87-year-old Nena Lombardi

If you ask Chuck Gibson, he'll insist most of what he does is nothing special and, to some degree, he's right.

Changing light bulbs, fixing plumbing, watering flowers, taking out the trash and bringing in the mail are the type of tasks most people consider simple chores.

But if you ask Chuck's neighbours they'll tell you something different.

"For me he's an angel," says Nena Lombardi, an 87-year-old who lives across the street from Gibson's house in Ancaster.

"Chuck is a very kind, considerate, thoughtful person, all packaged up. He really is a good neighbour,"  adds Kathleen Berry, 81, who lives across the road too.

You basically have to drag it out of Gibson before he'll admit it, but for the past decade or so he's been acting as a sort of handyman on call for a handful of neighbours in his close-knit townhouse community made up of mostly retirees.

We're looking for other Heroes of the Hammer. Help us find those special people in Hamilton who bring communities together and make life in their corner of the city richer and more connected. We're looking for the local organizers, planners and champions who put in the time and energy to bring people together.

Nominate your hero by emailing hamilton@cbc.ca or tweeting with #CBCHeroInTheHammer.

A plumber by trade, the 75-year-old's willingness to help the people living nearby with a seemingly endless to-do list of tasks is a big part of what makes those living in his neighbourhood feel at home.

Every winter he shovels the snow off their sidewalks. Every week he takes out their garbage and recycling, then brings the bins back in again. Every day he picks up their mail.

"Most of what I do is what anybody else would do, just helping your neighbours out," Gibson maintains.

"I could see that they were struggling with things … so I took it upon myself, you don't have to keep calling me, I'll just come over and do it."

Berry moved into the community 16 years ago and said Gibson made an immediate impression as the only neighbour to come over and introduce himself.

"He's that type, you know? And he's been here every since whenever you need anything."

She's lived in Hamilton for 55 years, but said she's never met another neighbour like him.

"Anything you want ... all you have to do is phone and ask," she explained, adding she tries not to abuse Gibson's generosity because it would be so easy to. "Everybody around here likes him."

His selflessness has inspired others in the neighbourhood, said Berry. The people living there look for ways to help each other out. They call around to see if anybody needs anything before they head to the store and the people he helps try to repay him by taking him and his wife out to dinner once in a while. 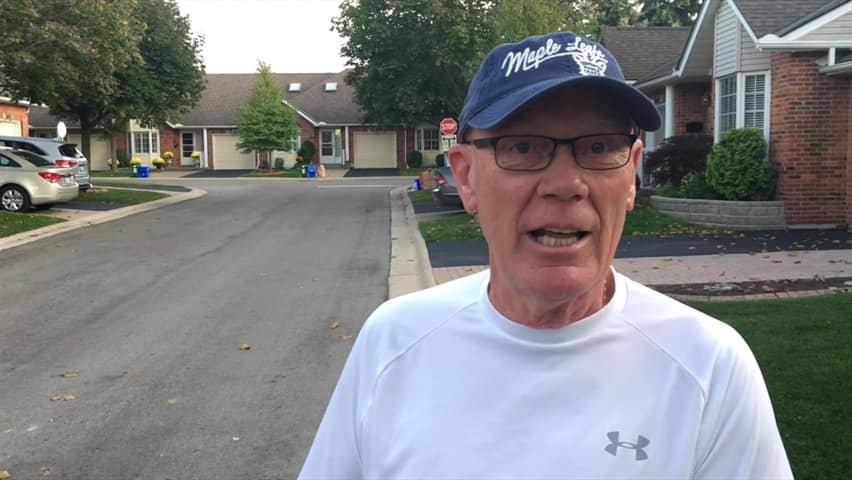 Chuck Gibson: Hero of the Hammer

1 year ago
0:41
Chuck Gibson takes out the trash, gathers the mail and does odd jobs for his neighbours, giving them a sense of community. 0:41

Gibson's wife, Betty, has mitochondrial disease that saps her energy and makes her weak. That means he has to stay close to home to care for her.

It's tough, but Gibson applies the same boundless energy he uses to help his neighbours to make sure his wife has everything she needs, from her medication to her morning makeup.

"I'm getting good at [makeup] now," he said with a laugh. "When I first started I said 'Betty, it looks like Halloween when I get done.'"

The neighbours Gibson looks out for also try return the favour by checking in on Betty when he goes to play baseball a couple of times a week.

Lombardi says all her neighbours are nice, but Gibson is different.

"He's so nice and not just for me, for everybody."

She wonders what she would do without Gibson. It's a question the neighbourhood will soon have to confront.

He's planning to move to an apartment nearby in the coming months — somewhere with less stairs to make everyday life easier for him and his wife.

Gibson says he doesn't have any plans to stop lending a hand. He'll only be a 10 minute drive away and he's still willing to be on call.

"It makes me feel good that I've helped somebody and I know it helps them, so that's what counts."

For Berry and his other neighbours, that good feeling is mutual.

"It makes you feel kind of secure … when you know there's somebody looking out for you."