Two researchers connected to McMaster University in Hamilton have published a new study identifying what they think is our best chance, if extraterrestrials call, to make sure we hear the message.

There could be 10,000 planets watching the Earth inside its 'transit zone' 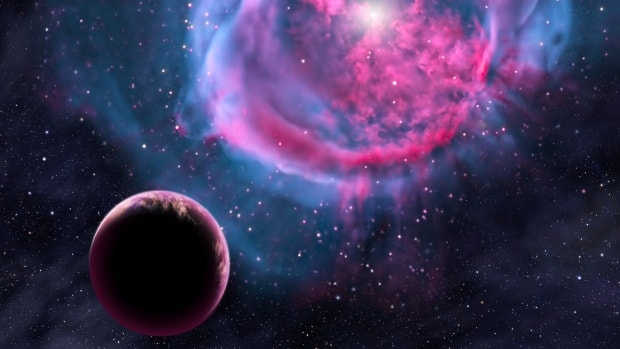 Hamilton7:06The best time and place to listen for sounds from outer space
Astrophysicist René Heller. a researcher connected to McMaster University in Hamilton, explains his new theory on how we might best be able to hear calls from intelligent life on other planets. 7:06

What if E.T. phoned? And we didn't know how to answer?

Two researchers connected to McMaster University have published a study that might give us our best chance to make sure we hear, if it comes, the call from extraterrestrials.

It involves the Earth's "Transit Zone," the period of time when the planet's path across the sun can be detected.

Rene Heller is a professor of Physics and Astronomy at the Max Planck Institute for Solar System Research in Göttingen, Germany. He co-authored 'The Search for Extraterrestrial Intelligence in Earth's Solar Transit Zone' with Ralph Pudritz, a theoretical astrophysicist at McMaster University. The study was published today in the journal Astrobiology.

You can read an edited and abridged transcript of Heller's interview with the CBC's Conrad Collaco or listen to the full, unedited interview by clicking the image at the top of this page.

If extraterrestrials wanted to contact us from far away, what do we believe about how they might do it?

There are a myriad of ways and we don't know anything about their technological capabilities, whether they would use radio telescope or laser pulses or transiting mega-structures in front of their stars. We approach things from a more astronomical point of view, a more principle point of view. We try to reduce the number of targets for us on Earth.

How does the Transit Zone method work?

If you think of the Earth's orbit around the sun as roughly a circle, then the Earth's orbit forms a circular plane around the Sun during the course of a year. The Earth also performs transits in front of the Sun. You need to see the solar system from a very distinct angle to see the Earth transiting in front of the Sun. You can't see the transit from everywhere. This zone we describe in our paper is a very thin band projected into the sky. It's kind of... you project the Earth's orbit into the sky. It turns out to be a very thin band in the sky with an area that is about one-thousandth the total area of the sky.

The transit method has been very successful for us on Earth in the search for extra-solar planets. We have found about one thousand of them. We propose in our paper that others, whomever they are, might be using similar techniques. In the end they have to deal with the same basic physical principles that we do. This is why the transit method should be a very compelling method to find other planets, that is, us.

How many planets could see us inside the Transit Zone?

How long would a message take to arrive from one of those planets?

What made you want to investigate this?

I'm approaching things myself from an exoplanet perspective. I'm an astrophysicist working on the Transit Method. I try to look for the effects of extra-solar planets and extra-solar moons and the light curves of stars. A few year ago I had a chat with a colleague and we thought maybe others are using the same method we are. I took a note. A few years later I stumbled over this note again and thought it might be a good idea to write up this paper. It seemed such an obvious idea.

I've had the chance to discuss the idea with colleagues of mine. Everyone I talked to was surprised the paper hadn't already been written.