Canada’s looming fentanyl problem has become impossible to ignore – and one doctor says the way it has been prescribed for the last two decades is a big part of the problem. 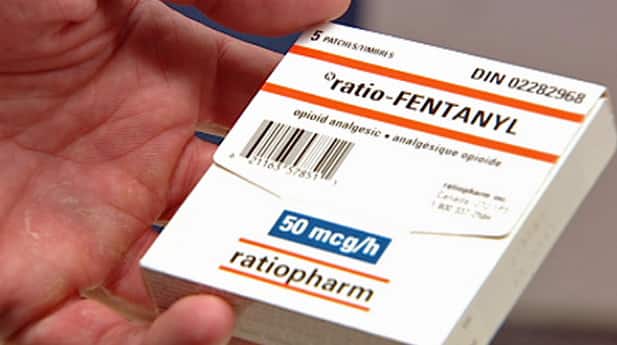 According to a recent study from The Canadian Community Epidemiology Network on Drug Use, the powerful painkiller-turned-street drug was involved in 655 deaths between 2009 and 2014.

While coroners do keep track of the deaths, it sometimes takes years to release that data. That has some calling for a provincial or federal overdose-tracking database.

Health Canada has said it's trying to find solutions to the problem, and doctors and other public health officials have also been talking about how to tackle it.

One of them is David Juurlink, a staff physician in the department of Internal Medicine and Clinical Pharmacology at Sunnybrook Health Sciences Centre.

He spoke with reporter Adam Carter Monday – you can listen to the full interview in the player above, or read an abridged version below.

Q: What role can physicians play in dealing with Canada's fentanyl problem?

I think we can prescribe opioids much less often than we do. It's not just fentanyl, it's oxy and hydromorphone and morphine and others. For about 20 years now, doctors have really been prescribing these drugs much more than we historically ever had.

It's not that there aren't people out there who can do well on these drugs when they're managed carefully, but they're hard to find and we can't identify them up front.

So we end up exposing a lot of people to opioids and harm in the process of finding them.

Q: So why that rise? Why are they being prescribed more?

That's complicated – but it has to do with the fact that first of all, pain is a very common complaint that doctors see, and we are conditioned by nature to want to help people.

But we don't have a lot of good drugs for pain. We have acetaminophen, and we have anti-inflammatory drugs – there are a few niche drugs here and there, but they have their toxicities, and they don't often work well, and so we've got opioids in the background.

And so in the mid-90s we started to get this message that we should be prescribing opioids more and more. We took that message rather happily I think, because we wanted a tool to help our patients.

But the problem is, that the data wasn't there to support that that message, and in hindsight we've learned that we've caused an awful lot of harm.

Q: You just released a study about how the use of opioids like fentanyl can escalate and then ends up being fatal. Can you tell me a little bit more about what you found?

It was a large study of more than 30,000 people in Ontario who were receiving opioids for chronic pain, and we made several observations. One was men were much more likely than women to escalate to high doses, and about twice as likely to die of opioid-related causes.

But probably the most striking finding for me was that among men who are taking high dose opioids, almost four per cent of them died of opioid related causes. That's just a staggering number.

What that means is, if you're a man taking opioids at high doses, you're more likely to die from your medications than almost anything else.

Q: So what are the implications then from the study – looking at a number like that – when it comes to how doctors prescribe fentanyl?

Well, I think we need to think long and hard before we start a patient on opioids. We don't get to fentanyl off the bat, usually it's a progression from weaker to stronger opioids and we land on these fentanyl patches because we've got nothing else to offer.

But I think most people on fentanyl would be better off if they weren't on fentanyl. But the most important message overall is for doctors to really dial back on how we prescribe these drugs. I'm not saying we shouldn't' prescribe them ever – I do it myself. But we need to be much more selective and much more vigilant before we bump these doses up as we've been doing.

Q: So how does fentanyl make its way from being prescribed to the streets? Are we mostly talking thefts, or people selling their medication?

A bit of both. It's certainly stolen from pharmacies or intercepted on the way to pharmacies from time to time. There are also patients who get prescriptions from doctors and they either use it themselves or they'll sell it on the street.

What we're hearing more and more about now though is the importation into North America of fentanyl that's produced by clandestine labs in other countries, and there's a huge market – doctors have helped make a massive market for opioids here and there's lots of money to be made.

The problem with the illicit fentanyl is that it's being passed off as heroin or put into pills that look like Oxycontin or it's even in some instances being added to cocaine. People who are buying these things have no assurances as to what they're getting and they're playing Russian roulette each time they do.

Q: And fentanyl is very, very strong, isn't it?

Compared to morphine, it's 80 to 100 times more potent. It's a very potent opioid.

Q: So what are some of the ideas that are out there for better controlling how fentanyl is dispensed by pharmacies?

Probably the most appealing one is the notion of a "patch for patch" program. The idea is if you're a fentanyl patient and you want to get your next prescription you have to bring your old patches back – and that's a good idea. It gives the pharmacist some measure of comfort that the patches aren't being sold or being manipulated.

Q: Medical officials here in Hamilton have been pushing for greater access to naloxone, which is a drug that can be used like an Epipen when someone is overdosing. How effective would that be?

It depends on how quickly it's given. When given to someone who is overdosing, it's a miracle – it literally wakes them up in a very short time. The problem is that if you wait 10 or 15 minutes to give it, the person is either going to be dead or have some serious brain damage from a lack of oxygen.

You have to be given it promptly.

Q: Should an official overdose tracking database be implemented in Ontario, or federally?

Most coroners do keep track of statistics. For 20 years or more now, the Ontario coroner has been tracking the annual number of deaths, and I think we're somewhere in the order of 600 deaths or so each year from opioids in Ontario. So on average, a couple every day or so.

But it's not the same all across the country. I can tell you that in the U.S. about 17,000 people will die this year from opioids. I don't think there is a single federal official who can give you a corresponding number for Canada. You can't hope to fix what you're not even really measuring.

I don't think it's the case that we have good stats in Canada, but I think we have to.

Q: The other thing about the coroner's stats is they tend to be distributed a couple of years later, aren't they?

There is a bit of a lag. When a person dies unexpectedly, it's investigated by a coroner. Most of these cases are established reasonably quickly, but there are often cases that take some time to be really clear about.

So it's not so much that the coroner is being slow, it's just that when you have thousands of cases to deal with, it's just going to happen.

It takes a little while to get the information, you're right.