The Ancaster councillor says he dropped his appeal blocking its release because he wants the incident to be over. 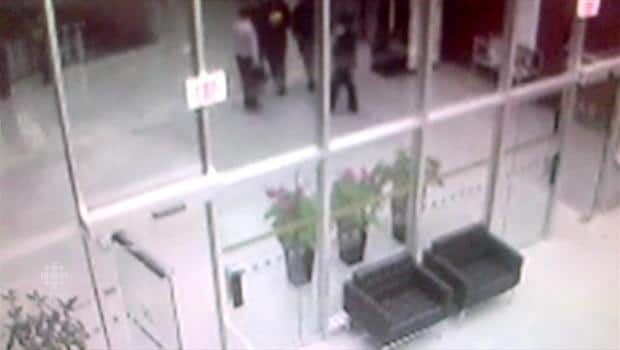 Much anticipated surveillance footage of an incident at Hamilton city hall between a city councillor and an independent journalist has finally been released.

Lloyd Ferguson, an Ancaster councillor, says he's dropped his appeal at the Information and Privacy Commissioner, which blocked the footage's release, saying he wants to put the issue to bed.

"This story has been going on for 18 months and has put a lot of stress on my family and distracted me from doing my job," he said in a Monday media release.

It's been one of the worst experiences of my life.- Joey Coleman

Coleman says he wants the issue to be over too. "I'm so fed up with this thing," he said.

"It's been horrible on me. It's been one of the worst experiences of my life." Ferguson's attempt to prohibit the video's release, he said, is what has prolonged the issue.

Coleman says the 15-second video only shows part of the actual confrontation and not a second physical altercation moments later. But the city said that's the only video available, and that the incident ended there.

Mayor Fred Eisenberger said the video shows what happened and it captures the incident.

"That's all the video there is of that incident," he said. "That piece of the video is the incident that occurred. Apparently there was nothing else."

Jason Farr, a Ward 2 councillor who was present, agrees with Eisenberger that there was no second physical altercation. "What you saw was what happened."

But Brad Clark, a former Ward 9 councillor, was also there and agrees with Coleman that there was a second incident. He said the tape is incomplete.

"It is edited because it stops dead," he said. "It stops abruptly. It doesn't show two people walking off in different directions."

The footage stems back to a February 2014 incident between Ferguson and Coleman.

If he wishes to continue to broadcast from (city hall), he's welcome to do so.- Mayor Fred Eisenberger

Ferguson was talking to another councillor after a late-night meeting and grabbed and shoved Coleman away. The incident resulted in a police investigation — no charges were laid — and an integrity commissioner investigation.

The integrity commissioner report said that Ferguson had breached the code of conduct but it did not recommend sanctions. Council received the report, which the city says is the administrative equivalent of acknowledging its delivery. André Marin, then the Ontario Ombudsman, maligned the report on Twitter, in part the commissioner, Earl Basse, interviewed Ferguson but not Coleman. He graded it an F.

Ferguson, who is also police services board chair, donated $1,000 to the Ancaster Community Foundation and stepped down from the committee to choose a new integrity commissioner/lobbyist registrar.

The incident also became the subject of the local documentary The Push. Coleman's supporters had called on the city to release the footage.

Coleman also said that the city has imposed sanctions on him after the incident, including restricting his access to the city's internet connection.

Eisenberger disputes that the city has punished Coleman over the incident, and said he's welcome back any time. He said that the city does not accredit media, and said no one there is prohibiting Coleman from continuing his work.

"If he wishes to continue to broadcast from (city hall), he's welcome to do so."

Coleman believes there were security cameras that had better angles, and that there was better footage. He doesn't want to speculate what happened with it. "I'm told it doesn't exist."

Coleman plans to return to work in January, streaming city hall meetings with his website, The Public Record. That's when the Ontario Ombudsman has oversight of municipalities.

"In the event that there's any future incident the ombudsman can investigate," he said. Under those circumstances, "I very much doubt a similar incident would occur."

Ferguson said since the incident happened, "there continues to be an attack on my character that I find upsetting and unwilling to ignore." He also distributed what he says were 24 inaccuracies in a transcript of Coleman speaking during a public showing of the Hamilton Seen movie The Push.