A raccoon's amazing climb down from a 10th floor balcony

Raccoons are good climbers, and a Hamilton apartment dweller discovered just how much that's true when a raccoon ended up on his 10th-floor balcony.

When a wildlife control company arrived, the raccoon scaled the wall to climb back down 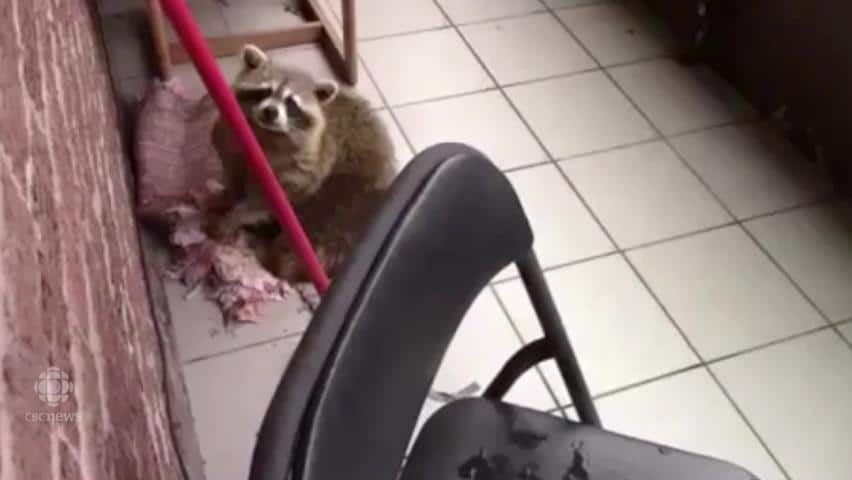 Raccoons are good climbers, and a Hamilton apartment dweller discovered just how much that's true when a raccoon ended up on his 10th-floor balcony.

The raccoon appeared to use its claws to climb 10 floors and onto the balcony. Bill Dowd, chief executive of Skedaddle Humane Wildlife Control, responded to the call. He was prepared to cage it, but when he arrived, the raccoon climbed spider-like back down the brick wall.

"In 27 years of business, this is a first call of this kind," Dowd said. "We have had calls for foxes, skunks, groundhogs, opossums and all sorts of animals in strange situations, but never a raccoon that high up on a balcony."

Raccoons are no novelty in Hamilton this year. Since December, the Ministry of Natural Resource has confirmed 100 cases of rabies in Ontario raccoons and skunks, 94 of which were in Hamilton.

The outbreak has resulted in increased stakes for people in wildlife control.

Mark Coulton of City Wildlife Services, for example, was bitten by a raccoon late last year and required 14 large needles and rabies shots.

Hamilton health officials are asking people to report animal bites or scratches by calling 905-546-2489. If you're bitten, you should also wash the wounds with soap and water and seek medical attention immediately.

They also advise to vaccinate pets against rabies and keep those vaccines up to date.