Some remarkable drone video has captured ice boulders forming and growing at the foot of Niagara Falls. 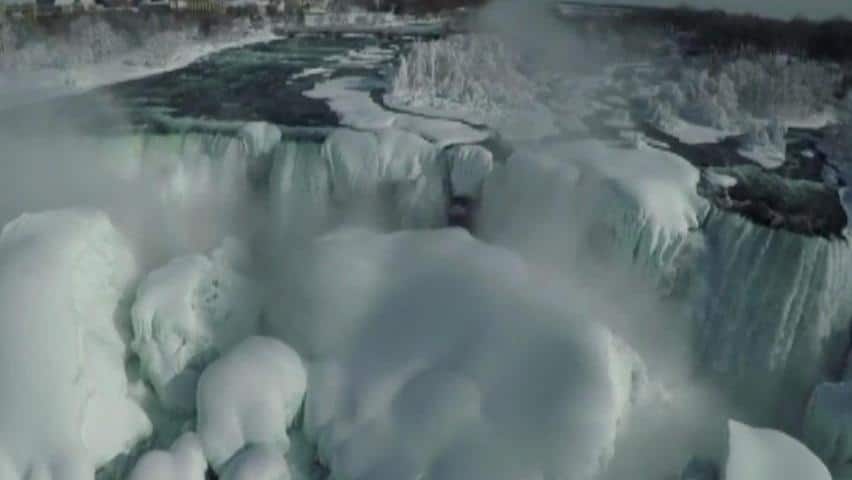 6 years ago
3:15
It's the Falls like you've never seen before- a bird's-eye view of the landmark in suspended animation, shot using a drone 3:15

The winter's deep freeze has transformed Niagara Falls into an icy spectacle, encasing the trees around it into crystal shells — a sight that's drawing tourists.

The Niagara River keeps flowing below the ice cover, so the falls aren't totally frozen over. But the massive ice buildup near the brink has become a tourist magnet for the second straight year after several relatively mild winters.

Visitors have been flocking to Niagara Falls State Park, next to the American Falls, one of three waterfalls that make up the natural attraction. The cold has created a thick coating of ice and snow on every surface near the falls, including railings, trees and boulders.

Things aren't expected to thaw out any time soon: Temperatures dipped to -22 C in Niagara Falls on Friday morning.

On Jan. 27, daredevil adventurer Will Gadd became the first person to climb a wall of spray ice at the edge of Niagara's Horseshoe Falls.
1 of 0

The Alberta man was named National Geographic's adventurer of the year in 2015.

Gadd, 47, was followed by another Canadian, Sarah Hueniken, 34, who grew up near the falls.

The climb was started on the American side of the falls, the National Geographic reported on its website.