A court appearance by 13 Enbridge protesters was abruptly halted when scuffles broke out in court between police and the supporters of the protesters. 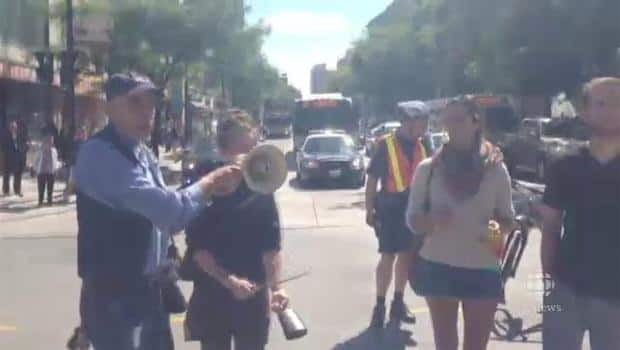 7 years agoVideo
0:41
About 40 protestors block the King and James streets intersection around noon Wednesday, right before 13 appear in court on trespassing charges from an occupation at the Westover Pump Station. 0:41

A number of Enbridge pipeline opponents were taken into police custody Wednesday after a court hearing into trespass charges erupted into scuffles between court security and protesters.

The court appearance  for 13 people charged after an occupation of the company's Westover pumping station in late June was abruptly halted when court security moved in to stop supporters inside the courtroom from disrupting the proceeding with shouts and other sounds.

"We are hoping that many people will be released today but we don't have firm details," Wolf Chrapko, a spokesperson for the group, said Wednesday evening.

The dramatic events started when an officer asked a women sitting in the second row to leave the courtroom after she repeatedly snapped fingers and clicked tongues. The officer had previously warned the woman to stop her behaviours.

On her way out, the woman said she didn't "want to be here in the first place" and swore and coughed loudly.

Protesters and their friends followed the woman as she was escorted by the officer out of the courtroom. She was led into a room with at least one officer.

The situation quickly escalated when protesters tried to push the door open while the officers tried to close it. A number of scuffles broke out in the hallway. Some protesters fell on the floor and refused to get up.

Protesters started clapping and chanting "cops, pigs, murderers" and "let her go." A dozen officers were called to the third floor of the courthouse as the situation became more volatile.

Many protesters said they were concerned about the woman being in a room with two male officers.

"One of my friends was taken into a (room) with two male officers," Meghan Lankin, one of the protesters, told CBC Hamilton.

"They (police) started grabbing people.... I'm upset about seeing my friends getting hurt."

As police cleared the floor, some remained in the building and told reporters that at least seven to eight people were led away by police in handcuffs.

Hamilton police did not respond to requests for comment.

The afternoon hearings were intermittently interrupted by protesters' behaviours from the start.

They applauded every time one of the 13 people charged stood before the judge, prompting the judge to order the audience to stop clapping or he would clear the courtroom. The protesters then resorted to snapping their fingers and clicking their tongues.

One of the protesters said during his hearing that the court controls "men with guns." The judge told the man to "do some readings" and explained that "the court stands between you and 'men with guns.'"

Only half of the 13 charged had their hearing before the scuffles halted the session. All of the protesters, representing themselves, asked to adjourn their hearing while they apply to see the evidence against them and seek legal advice.

A protester who did not want his name used told CBC Hamilton that he has spoken to an officer and those detained might be held overnight.

In the hours before the appearance, about 40 people blocked downtown intersections and held up midday traffic for a protest against the oil flow reversal of Enbridge's Pipeline 9.

The group chanted "No Enbridge! No line 9! Shut down the tar sands," "We don't want your bitumen poisoning our water source" and "Drop the trespassing charges" as they marched from the MacNab bus terminal to the John Sopinka courthouse on Main Street.

"I'm feeling good about the opportunity for us to use our court appearance for spreading broader awareness about the line 9 issues," said Chrapko, during the protest before court.  "More than anything, it's a good opportunity to spread the word further."

On June 26, Chrapko, who lives in Guelph, was arrested by Hamilton police, ending a six-day occupation at the Westover Pumping Station. Westover is the mid-point of Enbridge line 9, a nearly 40-year-old pipeline. The oil giant has applied to reverse the oil flow of that pipeline to course more domestic product from western Canada.

"It's an existing flowing pipeline and it has been for 40 years," said Graham White, spokesperson for Enbridge.

Line 9 crosses several major rivers that drain into Lake Ontario and the St. Lawrence River, as well as Spencer Creek, Hamilton's largest watershed. Opponents say the pipeline will carry diluted bitumen from Alberta's oil sands, which is heavier and puts the line at greater risk of a rupture. That was one of the issues the protesters had in June.

White said the oil company "respects the rights" of citizens to stage protests.

"The issue with the Westover situation is that was not legal," White said. "It was our property on which they trespassed. They interrupted a vital service."

During the demonstration Wednesday, four police officers on bicycles and another two from the mounted unit tried to block protesters from march west along King Street to James Street. But the protesters marched through the line the officers tried to create. At that main intersection, the group stopped and chanted. Traffic was stopped and backed up south on James Street and west on King Street for about 10 minutes.

"We recognize the perverse irony that 13 of us will be appearing before a judge to stand accountable for trespassing while Enbridge has crimes everyday," said David Prychitka, 29, a Hamilton resident who also appeared on trespassing charges Wednesday.

"Spills have enourmous impacts on communities and devastates environments and they're not standing before a judge."

Protesters called on Enbridge to drop the trespassing charges, but White said that's between their legal department and the police.