Don't like that drone overhead? Grab an anti-drone freeze ray

A group of companies in the U.K. have come up with something that sounds straight out of a cartoon: A device with an anti-drone freeze ray. 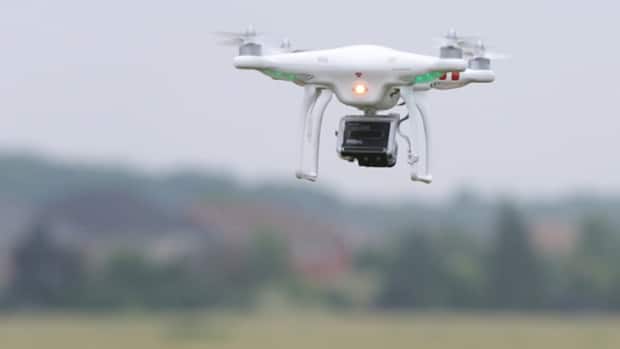 You're hiking along, maybe with your family on Thanksgiving weekend, and you hear an unmistakable buzzing sound — a drone overhead.

Ever wish your arms were long enough to knock it out of the sky?

A group of companies in the U.K. have come up with something that sounds straight out of a cartoon: A device with an anti-drone freeze ray.

CBC Radio technology columnist Jesse Hirsh explains it all. Listen to his full interview with CBC Hamilton's Kelly Bennett by clicking the image above. You can read a summary of the interview below.

What's the intended market for an anti-drone freeze ray?

HIRSH: I think it's twofold. On the one hand, it [could be used by] the official people — think governments, think military, any industrial facility that doesn't want drones flying overhead, whether for safety or security reasons. But this is a civilian device. So it's not as if its use would be restricted. So in that sense, if a property owner so desired to have their land free of drones, they, too, could buy such a device. So if anything it's really marketed towards people who have a value toward privacy, have a need toward security or safety.

But really it's a reflection of the proliferation of drones. And the extent to which that they've seemingly become so uncontrollable that we have to turn to technology to try to regulate technology.

Who's behind this technology?

It was developed by a consortium of three British defence contractors who each had different technology involved in creating this device. It's currently being distributed here in North America by a company called Liteye Systems, but it was developed in part in concert with the U.S., U.K. and French governments. This is really a solution to look at not just disabling drones, but keeping them out. So as a drone ray it also almost acts as a drone fence. Which, whether it's airports, whether it's military bases, whether it's sensitive industrial installations, I think that's the primary way it's been developed as a way to keep drones out in terms of acting as a kind of digital fence.

It involves radio waves. The device is outfitted with rather sophisticated cameras that can identify a drone or multiple drones approaching the area. And then it has a rather strong directional antenna, which can overwhelm the drone with radio waves. It's sort of the equivalent of a denial-of-service attack, which, on the web, is when you overwhelm a web server with requests so that it can no longer respond to any. It's a similar analogy, where you're overloading the drone with radio waves, severing the connection it has with its operator so that once disconnected with the pilot, the drone doesn't know what do, so it just hangs there, frozen, in mid-air, until it runs out of energy or batteries, at which point it floats to the ground.

Well, most drones are designed to float. If they don't have that programming, yes, it will crash. But the [freeze ray] manufacturers actually tout this feature as being part of its covert capabilities. The idea being that a drone operator is flying their drone, out and about. All of a sudden it freezes in mid-air, it's no longer responsive and then it comes to the ground. So the hope is that that individual operator has no idea that they've been intercepted by this drone ray, thus protecting the privacy and security of whoever has that drone ray installed.

The people who are really into drones seem like a hardy bunch. Won't they just come up with a way to combat this technology?

Yep. Pretty much. And it speaks to the problem of fighting technology with technology. 'Cause you can always get more technology to get around it! In this case it would involve preprogramming the drone. So rather than having remote piloting, you would just already set its route ahead of time. Let's say you wanted to scout out a military base, you could say: "Here's the route I want you to take; go and fly back," kind of like a boomerang. And that's why I prefer to call drones "flying robots." Because like robots, they can be reprogrammed. They can be modified. They can be changed. And that's where this drone ray is really designed for basic consumer drones, but not the kind of custom jobs that the real enthusiasts or drone professionals are more capable of.

Are we going to be looking up soon in the sky and seeing drones fighting drones overhead?

It certainly evokes that, the idea of drone wars, that you have different types of competing technology fighting each other. Interestingly enough, I found this project called SkyJack — a set of software that you can install on consumer-grade drones, and it can hack other drones in mid-flight. So we've been talking about a scenario in which, say, a property owner has a ray that freezes drones. Well, using SkyJack, you could have your own fleet of drones. They detect an incoming object, they fly up to intercept it, wirelessly hack it and then get it to join your swarm as if it's a group of pirates. And all of this exists currently, right now. It's more a question of — if these drones become more accessible and more affordable — we'll see them proliferating as more people find uses for this technology.