City will look at making Aberdeen Avenue safer, but it didn't come easy

The city will do a larger review of Aberdeen Avenue late next year. But for a while, it looked like not everyone agreed to it. 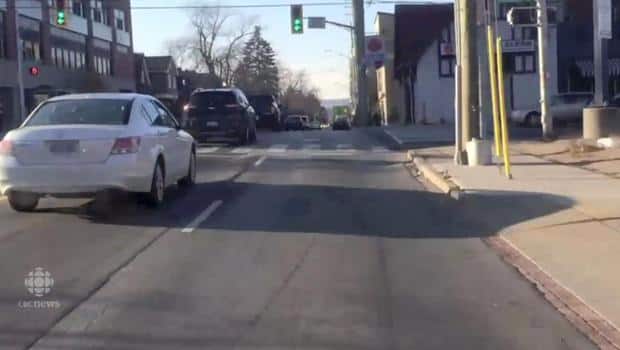 5 years ago
0:59
Local lawyer Ned Nolan puts a camera on his bike to ride down Aberdeen 0:59

It went through two hours of debate and tension among local politicians, but in the end, the city is looking at how to make Aberdeen Avenue safer.

The city will look at putting Aberdeen on a road diet, with more space for pedestrians and cyclists, in late 2016. And in the meantime, city staff will look at interim measures to make the street safer.

The move originated with Aidan Johnson, a councillor for Ward 1 in Hamilton's west end. Johnson asked for a review of the street, echoing assertions from neighbourhood groups that its current configuration is unsafe.

But Terry Whitehead, a Ward 8 councillor on the Mountain, objected. He plans to introduce a motion of his own on Dec. 9, this one to block making major changes to streets until city staff have finished their traffic planning for light-rail transit (LRT). Construction on an LRT line along King Street is scheduled to start in 2019.

A group of community members appeared at a city hall general issues committee on Wednesday, all wearing yellow buttons with the hashtag #LeanAberdeen.

Ned Nolan, a local lawyer, showed a video he made as he cycled Aberdeen. (The video is above.)

"No one today is proposing a reduction in capacity," he said. "All that's being proposed, for heaven sake, is a careful study by experts with an ear to widespread community concern."

City councillors discussed the issue at length, at certain points objecting to each other's comments, interjections and length of their speeches. In the end, the Aberdeen motion passed unanimously.

The city will do an in-depth study of Aberdeen after it finalizes its transportation master plan, which is due in summer 2016. The master plan will deal with issues such as two-way street conversions, complete streets and even gondolas.