The first baby bald eagles born in the Hamilton area in decades are another sign local restoration efforts are working, experts say. 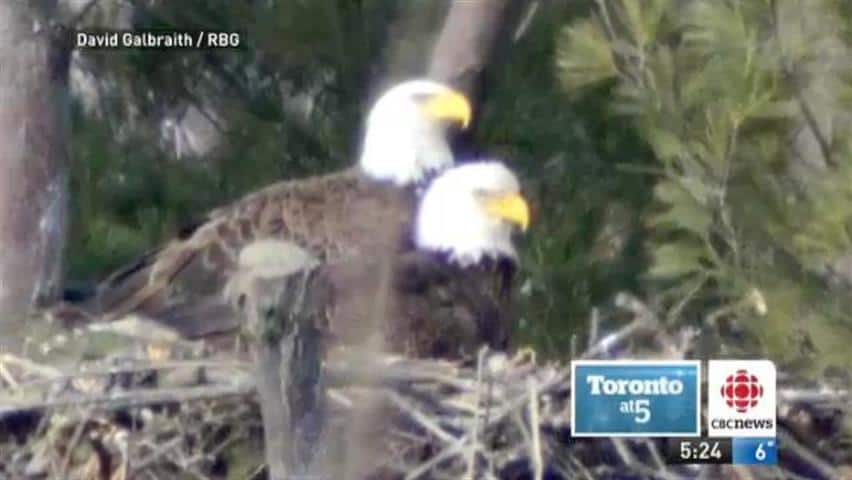 8 years agoVideo
2:03
For the first time in decades, a pair of eagles have been born on the north shore of Lake Ontario. 2:03

The first baby bald eagles born in the Hamilton area in decades are another sign that extensive efforts to rehabilitate the local environment are working, say those who work in conservation.

By the early 1980s, bald eagles were all but extinct in the northern Lake Ontario region. In fact, there were only four active nests in all of the Great Lakes, largely due to the widespread use of the pesticide DDT.

Conservationists were thrilled a few years ago when a pair of eagles nested in an area near Hamilton that is part of the Royal Botanical Gardens, but the pair failed to reproduce. They were thrilled again when the pair successfully hatched young on the weekend.

The eaglets also have people talking because the area they were born in, called Cootes Paradise, has a comeback story of its own.

McMaster University biology professor Patricia Chow-Fraser has been involved with rehabilitation efforts in the 840-hectare wetland and woodland.

"It’s just like human neighbourhoods. If you really want a vibrant neighbourhood, you want to start seeing kids there," said Chow-Fraser, who specializes in Great Lakes environments.

Chow-Fraser said the installation of a special barrier to keep invasive carp out of Cootes Paradise was critical, along with efforts to better deal with sewage treatment in Hamilton and runoff from nearby urban development.

Besides the pair of eagles, other examples of native biodiversity returning to the area include populations of large-mouth bass and northern pike, she said.

The baby bald eagles are also a boost for those who have worked to restore the waterways that feed into Cootes Paradise, said Scott Peck, director of watershed planning and engineering for the Hamilton Conservation Authority.

He added that a number of groups in Hamilton and Burlington have been contributing to the rehabilitation of the Hamilton’s harbour and the Spencer Creek watershed, which feeds into Cootes Paradise.

"The eagles make that visual identification that things are getting better in the watershed," he said "There’s certainly more work to be done, but it’s certainly a good indicator."

Much of the improvement in Cootes Paradise is a result of one of the largest restoration efforts of it's kind on the Great Lakes called Project Paradise, led by Royal Botanical Gardens.

"This milestone is a testament to the restoration efforts of Project Paradise," RBG’s Head of Natural Lands, Tys Theysmeyer, told CBC News this week.

"As we bring Cootes Paradise back to the condition it was in before the 20th century, species that once called this area their home will continue to return."

The rehabilitation efforts in the western tip of Lake Ontario include nesting platforms, artificial ponds, an aquatic nursery, and a unique carp barrier.

The roots of Project Paradise date back to 1986 when the International Joint Commission named Hamilton Harbour one of 42 Areas of Concern.

The nest, located in the Hopkins Woods Special Protection Area, can be viewed at a safe distance from the Marshwalk Boardwalk, which is accessed from the Royal Botanical Gardens Arboretum, the RBG said.