It's easy to imagine someone in the early 1900s, when the First World War had ended and Prohibition raged, walking the dark, cavernous underground of Hotel Hanrahan.

It's easy to imagine someone in the early 1900s, when the First World War had ended and Prohibition raged, walking the dark, cavernous underground of Hotel Hanrahan.

The main floor was a gentleman's club and later a strip club. Above that, there were hotel rooms. But underneath all of this, says property owner Konrad Sit, is where the action happened.

It might have been off-track betting on horses then — as it was in later years — or a seedier, more private version of the club above. There are dark rooms that lead to darker rooms, hallways of exposed brick and dangling light bulbs, a thick vault and a now-blocked tunnel that was part of a hidden pathway to the waterfront.

"There's a big vault back there, so you guys can imagine what goes in a big vault," Sit said. Anyone accessing it would have had to make it past the kitchen staff, then the office that hid the vault. 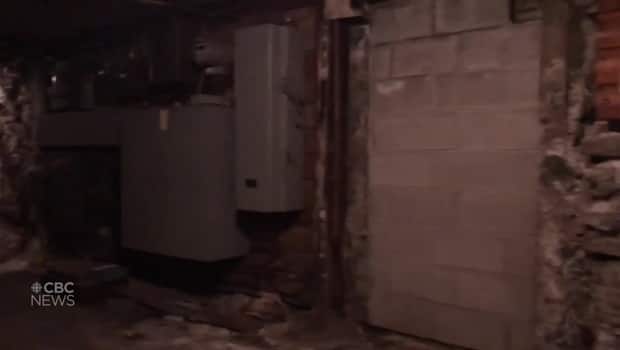 The basement of the former Hotel Hanrahan

"And to get past the vault door, you'd have to finish the whole route of all your relationships."

There's also a tunnel, now bricked over, that was "a path all the way down to the water," he said. "So it would jump from house to house to house and business to business."

Sit told what he knew of this Peaky Blinders-esque history this week as he led a tour through the former Hanrahan's hotel. Built in at least 1890, although possibly earlier, Hanrahan's was about to be torn down by John Barton Investments Inc. and replaced with a modern-day medical centre, along with 45 stacked townhouse condo units. Servicing issues kiboshed that, Sit said.

Now the building will house a new kind of social multicultural hub, Sit said, and it will be unlike anything the city has seen. The new tenant will announce the plans March 5 at An Evening for Mac Kids event at The Cotton Factory.

The Hanrahan hotel story dates back to 1908. That's when Thomas Hanrahan opened the three-storey Hotel Hanrahan on Barton Street at Catharine. The Hamilton Herald described it then as "one of the leading hotels in Hamilton."

It's unclear exactly when Hanrahan's became a strip club. Bob Bratina, former mayor and Liberal MP for Hamilton East-Stoney Creek, said last year that he remembers it as a gentlemen's club in the 1940s. Billie Holiday performed there.

The evolution to strip club, Bratina said, happened alongside the decline of Barton Street. Once a bustling commercial area, the street became littered with vacancies and increased crime. By the 1980s, Hanrahan's was getting the wrong kind of headlines, like "Tavern staff call 911 after receiving biker death threat" and "Father-to-be slain at bar."

A property search shows Sit's family bought it in 1988 for $1.3 million. Hamilton Strip closed last year ahead of the planned John Barton development, marking the end of the final strip club in Hamilton. The Barton land was one of three properties zoned for a strip club in Hamilton, and the other two have long been used for other purposes.

Now, Sit's crews are peeling back layers of history.

On the main floor, workers have dismantled the former Hamilton Strip stage and bar and torn down the walls that once formed a dressing room for the dancers, although hints of the purple motif remain. ("Physical contact with the attendants is strictly prohibited," one sign reads.)

Above that, crews are renovating two floors of what used to be a hotel. The pipes are old and exposed, the wooden doors dented and chipped over the years. Sit isn't sure when it was last a hotel, but he thinks Hamilton Strip dancers stayed there for a while in the late 1980s. For a few years, it was mainly home to squatters.

Underneath, there is a large area that was off-track betting as recently as the early 2000s. A flyer remaining in the office area off the kitchen shows Beer Store hours as of 2003, and newspapers to check for gambling results.

Beyond that are rumbling boiler rooms and crawl spaces, and rusty sinks, and the vault filled with low-hanging spider webs.

He's talked to neighbours, he said, and "a few are quite excited that this building is being restored."

"I'm quite fine with a restoration effort, especially on an interim basis."

As for the basement, Sit says he doesn't plan any big changes.

"None of this stuff down here has ever been used for a long time," he said.

"The only reason for coming down here has been to touch up the boiler, the furnace or the fire sprinkler system, but everything else here is pretty much untouched."