Realtors are warning that buyers who wait until the new year to jump into the market may not be able to get into the house they're after — having to lower their price range by 15 per cent or more, or look in different neighbourhoods.

Hamilton realtors are warning their clients about mortgage rules that will make it more difficult to qualify for a mortgage beginning in January.

They're warning buyers that if they wait until the new year to jump into the market they may not be able to get the house they're after — and might have to lower their price range by 15 per cent or more and consider different neighbourhoods.

"I'm contacting all of my current buyers to make sure they understand," said Joe McMahon, a Burlington-based realtor. "Most of the public don't realize how much this is going to affect them."

But the impact of the new rules may not be that straightforward.

The new rules require borrowers to pass a "stress test" on their mortgages, where banks qualify them based on whether they could still afford their monthly payments if interest rates were 2 per cent higher. They take effect Jan. 1.

In addition to lowering the amount buyers can finance, the move is expected to dampen demand by allowing fewer people to qualify for loans. But that in turn could bring prices lower as sellers find fewer buyers able to pay premium prices.

'Trying to time the market on home prices is difficult'

While realtors always have a vested interest in buyers buying and sellers selling, they're especially concerned about getting out the message now that buyers and those looking to refinance will face a different environment after the new year.

It's unclear how much of an effect the new rule will have on pricing, as it may bring a new wave of buyers from Toronto and elsewhere similarly affected by the new rules in that city.

And that means it's not as simple as act now or be priced out forever, or wait and see if prices tank as a result.

"It is going to mean that there are borrowers who are not able to borrow as much as they were and that affects the price that they can pay," said Tsur Somerville, senior fellow at the UBC Centre for Urban Economics and Real Estate.

Somerville said rushing to buy something because you feel pressured by changing rules isn't prudent. Neither, necessarily, is waiting because you think prices will surely drop, he said.

"Rushing into home-buying decisions is usually a bad idea," Somerville said. "I think that trying to time the market on house prices is difficult."

The government passed similar stress test rules last year for insured borrowers, who make down payments of less than 20 per cent of the house price.

But these rules, announced last week by Canada's top banking regulator, apply to all borrowers, no matter how much you have to put down.

"The spring market is going to interesting this year," McMahon said. "I don't know what it will bring."

'Will prices actually go down?'

McMahon just sold a house on Margaret Street in Strathcona on Friday night. He wouldn't disclose the sale price, but it was listed for $424,900.

He used that house as an example of how affordability will change.

"People who are qualifying for $400,000 today, they won't qualify for that same mortgage January 1," he said. "Will prices actually go down? That's a hard call. I think they'll at least level off."

The rules will lower the maximum amount that people will qualify to borrow when they go see a new lender with the intent to buy or refinance their home. The rules actually target banks, not the housing market — the idea is to make sure banks can be resilient and weather rising interest rates.

The new rules come as prices in Hamilton have been dropping since spring, when the provincial government introduced new rules intended to cool down overheated Toronto and Greater Golden Horseshoe housing markets.

Hamilton home prices were down about 13 per cent in September from a high reached in April, according to numbers released earlier this month by the Realtors Association of Hamilton-Burlington (RAHB).

But prices were still up about 7 per cent from September last year.

'This is a solution to a problem that doesn't exist'

When you knock your first-time homebuyers out of the market, you're going to do some long-term damage.- Suzanne Boyce , mortgage broker, The Personal Mortgage Group

Lou Piriano, president of the Realtors Association of Hamilton-Burlington, sees the stress test as definite bad news for the Hamilton market.

The regulator's move is heavy-handed and will hurt people it shouldn't, he said.

"I have a problem when the government puts their thumb on the scale," said. "I can understand why they're trying to protect the Canadian taxpayer. But this is a solution to a problem that doesn't exist."

Suzanne Boyce is a mortgage broker who says borrowers may still have options to go outside of the big banks and get mortgages from credit unions, which are provincially regulated.

She said the stress test for bank borrowers "is not the worst news in the world" but will keep some people from participating in the housing market.

"When you knock your first-time homebuyers out of the market, you're going to do some long-term damage," she said. 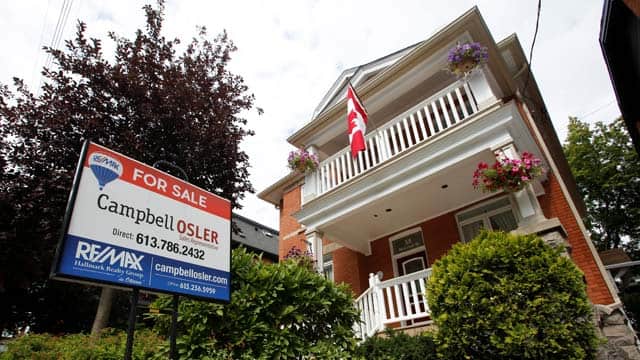 New mortgage rules include stress test for all borrowers

3 years agoVideo
2:11
New mortgage rules include a "stress test" for borrowers with uninsured loans to ensure they can withstand higher interest rates 2:11

Kelly Bennett is a freelance reporter based in Hamilton. Her writing has appeared in CBC News, the Toronto Star, Voice of San Diego and elsewhere. She can be reached at kelly@kellyrbennett.com.