Hamilton police and other GTA officers broke up a large crowd that spilled across parking lots on Saturday night for an 'impromptu' car show.

Premier condemns event, which occurred on the same day he limited gathering sizes

Hamilton police are investigating to find — and charge — the organizers behind a "Mega Meet 2.0" car show they say gathered hundreds of vehicles and a large crowd that spilled across several Ancaster parking lots on Saturday night.

But despite it wildly surpassing the limits placed on gatherings earlier that day by the provincial government, police say no one there was charged or fined.

"Given the size of the crowd, and the overall risk to public safety, the need to disperse the crowd outweighed the ability to find specific individuals at that time," said Supt. Will Mason of the Hamilton police in a media event on Sunday.

A Hamilton investigating team is taking over. If the organizers are identified, police say they won't hestiate to charge them, mostly with fines under the provincial pandemic response.

As of Saturday, the minimum fine for organizers of events that break the province's rules is $10,000.

Police would not go into detail on where they were in that process. 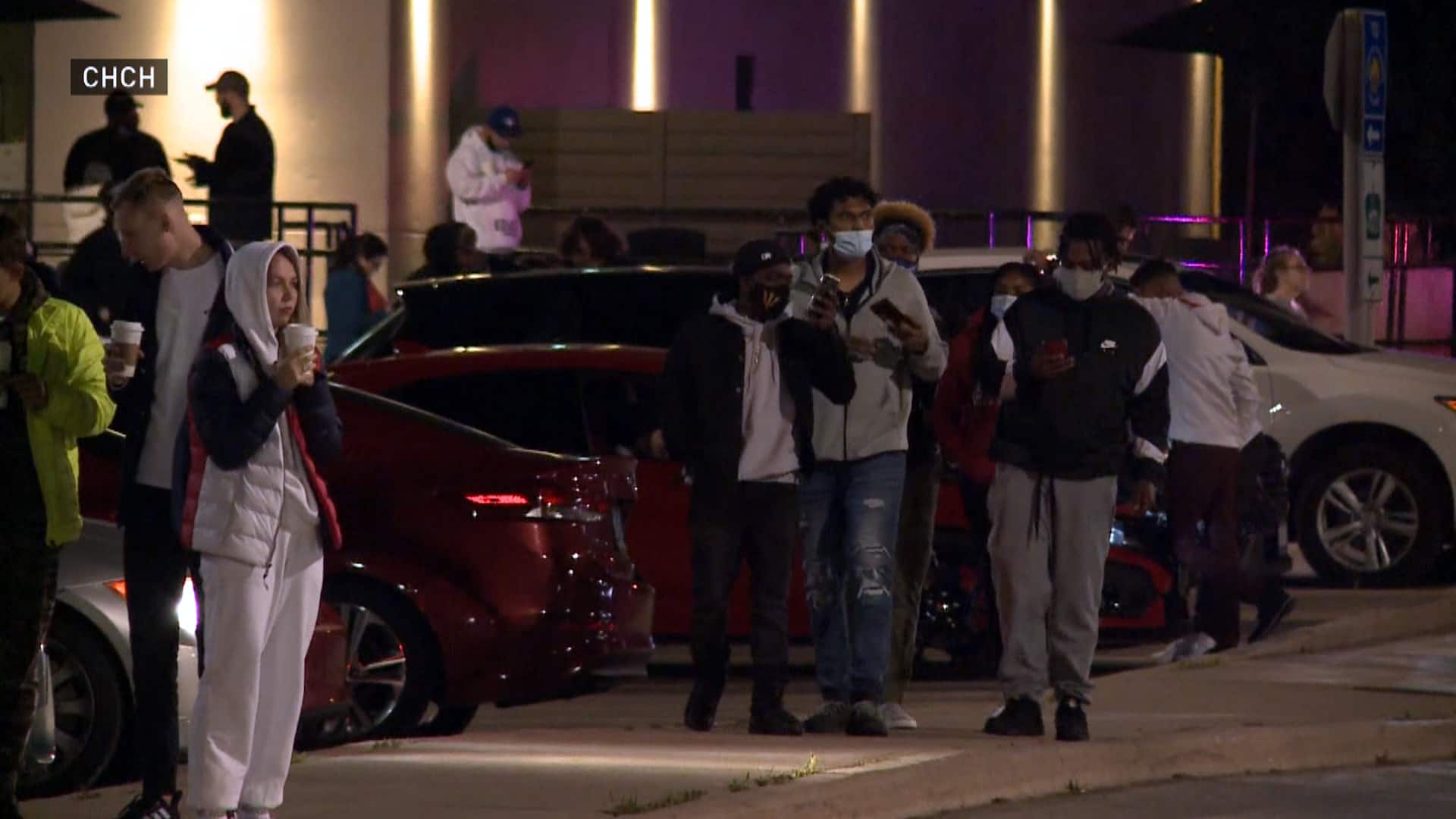 1 month ago
0:52
Hamilton police and other GTA officers dispersed a large crowd on Saturday night for what police are calling an "impromptu car show." 0:52

Mason said Hamilton police received information that a "mega meet" was planned for the lot. By the time three officers arrived, a large group of cars had already set up.

In an hour, people filled the movie theatre parking lot, the Chapters parking lot and spilled into smaller surrounding lots. A large proportion of those people came from outside Hamilton, he said.

"The participants should be ashamed of themselves, and they're going to go home to families who they potentially are putting at risk," he said.

The meet started at about 6 p.m. and police cleared the bulk of people from the parking lot by 9:30 p.m. People who were asked to leave, he said, were mostly co-operative.

The crowd was well over the new allowable limits for outdoor social gatherings set by the province to slow the spread of COVID-19.

Staff Sgt. Richard Vanderboom said police were concerned about the size of the crowd and about the potential for street racing. On Saturday, he declined to estimate how many people were there, but said about 500 cars had turned out.

"We were trying to prevent a potential street racing problem. We were successful," he said.

Mason said that the goal was to disperse the group as quickly as possible to mitigate risk of COVID-19 and street racing, which is why police didn't stop to issue fines.

About 20 police officers in all, including from the out-of-town services, were involved, he said.

Earlier on Saturday, Premier Doug Ford had announced that the province was lowering the number of people allowed at social gatherings across Ontario.

Effective immediately, private, unmonitored gatherings were to be limited to 10 people indoors and 25 people outdoors for the next 28 days, Ford announced at a news conference at Queen's Park.

Ford condemned the event in a statement on Sunday, adding that people's sacrifices and efforts can't be "all for nothing."

"The reckless behaviour that we saw in Ancaster last night was totally unacceptable," said Ford. "While Ontario has made incredible progress in the fight against COVID-19, we cannot take that progress for granted. This fight isn't over and now is not the time to let our guard down." 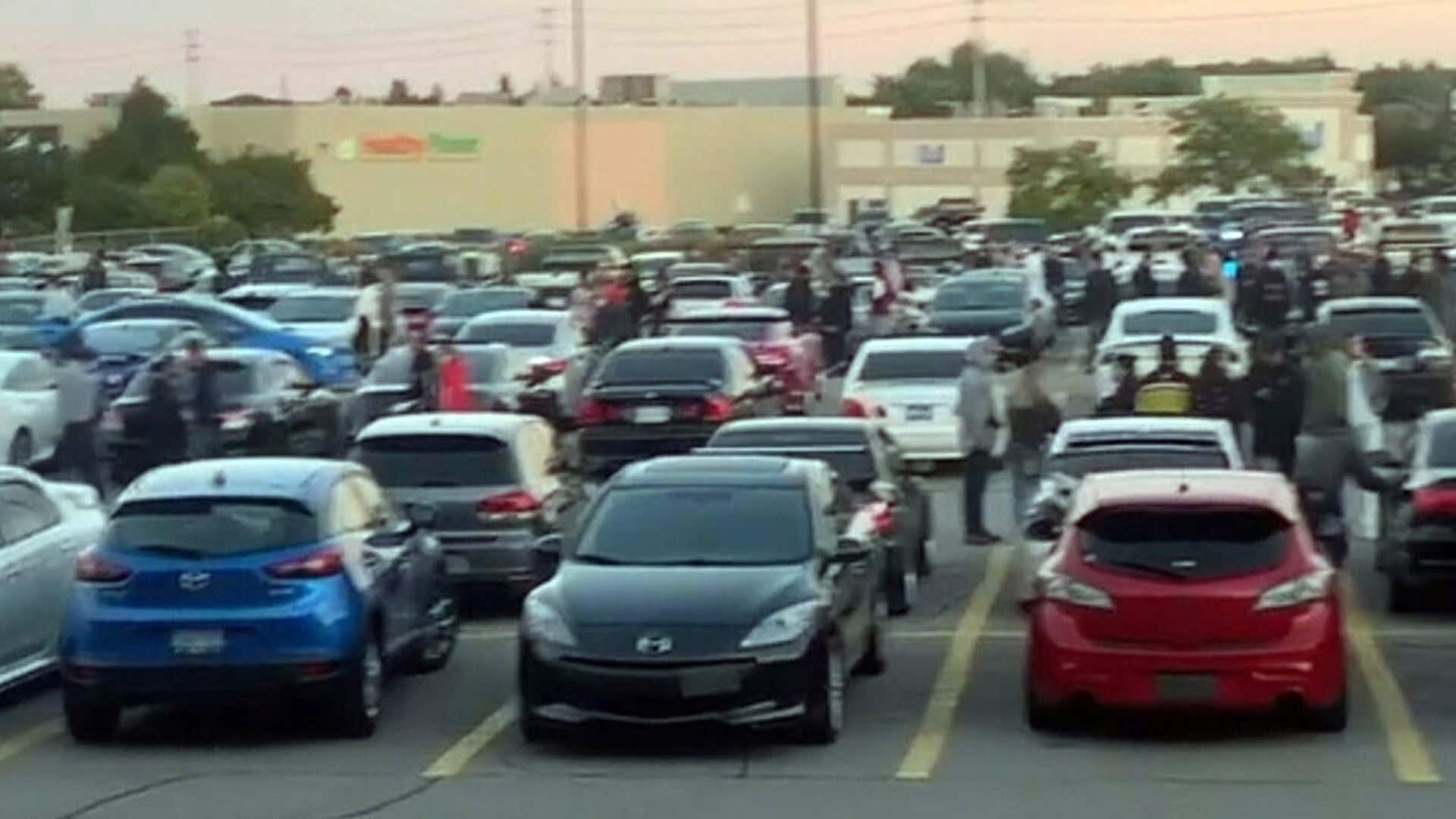 1 month ago
2:52
Police from several regions in Ontario broke up an "impromptu car show" on Saturday night. About 500 cars were driven to a movie theatre parking lot. 2:52

Hamilton West-Ancaster-Dundas MPP Sandy Shaw said she spoke with police about the incident.

"This was a very dangerous situation that risked our safety," she wrote on Twitter.

An event like this is unacceptable. I will work with my counterparts on measures to address the future safety of our community <a href="https://twitter.com/hashtag/hamont?src=hash&amp;ref_src=twsrc%5Etfw">#hamont</a> 2/2

The group involved with these "mega meets," Mason said, has been creating "traffic chaos" throughout the GTA with anywhere from 50 to 300 street racing-style cars attending events.

He added this was a new occurrence for Hamilton.

Participants have been known in the past to "take over city streets" to drift or race, Mason said. He added that some people have used vehicles to block intersections and highway ramps to hamper police response.

Mason said there were no incidents of street racing or roadway takeovers involved with this event.

Officers are aware of that video has been posted to social media and will be following up with it in their investigations.

Police are asking anyone with information on the organizers to contact them at 905-546-3886 or Crime Stoppers.