In 2009 we were hit with the H1N1 strain of the swine flu. It triggered widespread vaccinations. More than 120 people died in Ontario. And now it’s back. Dr. Bryna Warshawsky, a medical director with Public Health Ontario, tells us what we need to know about this year's strain.

It's not too late to get the influenza vaccine, expert says 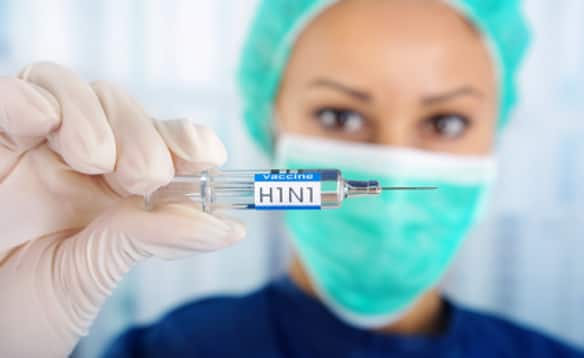 In 2009, Ontario was hit with a strain of swine flu called H1N1. It triggered widespread vaccinations. More than 120 people died in the province. Now it's back and appears to be hitting children harder than the flu usually does.

Dr. Bryna Warshawsky, a medical director with Public Health Ontario, tells us what we need to know about this year's strain. She spoke with the CBC's Conrad Collaco about this year's flu season and how H1N1 made a comeback. You can read an abridged and edited version of the interview or listen to the full audio interview by hitting the play button above.

How does this year's version compare to the one we were so worried about in 2009?

It's fairly similar. The difference is that in 2009 that was the first time that strain had circulated. As a population we had very little immunity, therefore it affected a large number of people, especially younger people. Since then, that strain has circulated a number of times and we have been vaccinating every year against that strain. We have more immunity now, so fewer people are getting ill.

What about those of us who never got vaccinated? Or who have never had a flu shot before?​

It's definitely not too late to get the influenza vaccine. It takes about two weeks for the flu shot to reach its maximum effectiveness. We know H1N1 will probably circulate for a number of weeks into the winter season. We often see an influenza B strain. That often happens later in the winter. Getting vaccinated now will help prevent that strain. For next year, the best time to be vaccinated is in late October/early November.

We don't really know why influenza does what it does ...  Last year we saw influenza A and influenza B circulating at exactly the same times.- Dr.  Bryna   Warshawsky , Public Health Ontario

Those are suggestions for prevention. What do you suggest for treatment?

Most people with influenza will get better on their own. People should seek medical care if they are feeling particularly ill. However, for some people there is treatment. It can make us feel better and may prevent some of the complications like pneumonia. That medication is particularly important for people who are older or people who have underlying medical conditions, or for young people or for pregnant women. Those people should consult with their health care provider.

How did the H1N1 strain of the swine flu make a come back?

H1N1 has circulated in a few years since the 2009 pandemic. Every year we tend to get one A strain followed by one B strain. There are two A strains that can cause problems. H1N1 is one and another one is called H3N2. In any given season one of them circulates. This year for some reason in Ontario we're seeing a bit of both. We don't really know why influenza does what it does. Generally we have one A strain followed by one B strain.

What else do we know about this year's flu in Ontario?

We started a bit later than the rest of the country. This year we seem to have been increasing over the past number of weeks. Luckily we don't seem to have peaked over the holidays which can often be a problem for out health care system. We haven't yet hit our peak for flu season.

Are we seeing a rise in the number of children hit by the flu in Ontario?

We don't have specific data for Ontario but we do know that H1N1 does cause illness predominantly in younger children and young adults. We can expect to see a similar profile as what is being seen in the rest of the country.

Flu can be unpredictable. Last year we saw influenza A and influenza B circulating at exactly the same times. It's definitely not too late to get the influenza vaccine. It takes about two weeks for the vaccine to reach its effectiveness. There will probably be H1N1 circulating following that two weeks.

The more people that are vaccinated reduces the chance of spreading influenza. When you are vaccinated you are less likely to pass infection to others, particularly to those who are at risk for the complications of influenza like the elderly, people with underlying medical conditions, young children and pregnant women. For those people, it's very important for them to be vaccinated and for the people around them. If you are a young, healthy person, by being vaccinated you can help prevent influenza from being spread to people more at risk of complications.