James Greenlee has been playing softball at McMaster every summer for more than five decades. In that time the league has changed and the fields too, but one thing has stayed the same: Summer means Doc is always on the diamond.

It's clear, even when he's on the sidelines, that James "Doc" Greenlee is the heart of the team.

With one foot up on the bench and a weather eye scanning the infield, he calls out encouragement, ribs his teammates and makes sure they stay focused on the task at hand.

This is, after all, G.S.A. softball, a McMaster tradition, and nobody knows it better than Greenlee.

For the past 52 seasons he's been the core of the co-ed three-pitch league where each team claims some connection to the university. He's also the embodiment of the unique spirit that's kept this special part of Hamilton going strong for generations.

We're looking for other Heroes of the Hammer. Help us find those special people in Hamilton who bring communities together and make life in their corner of the city richer and more connected. We're looking for the local organizers, planners and champions who put in the time and energy to bring people together.

Nominate your hero by emailing hamilton@cbc.ca or tweeting with #CBCHeroInTheHammer.

In all that time Greenlee figures he's only missed about half a season or so — sometimes playing pitcher or second base for two teams or even three at a time. 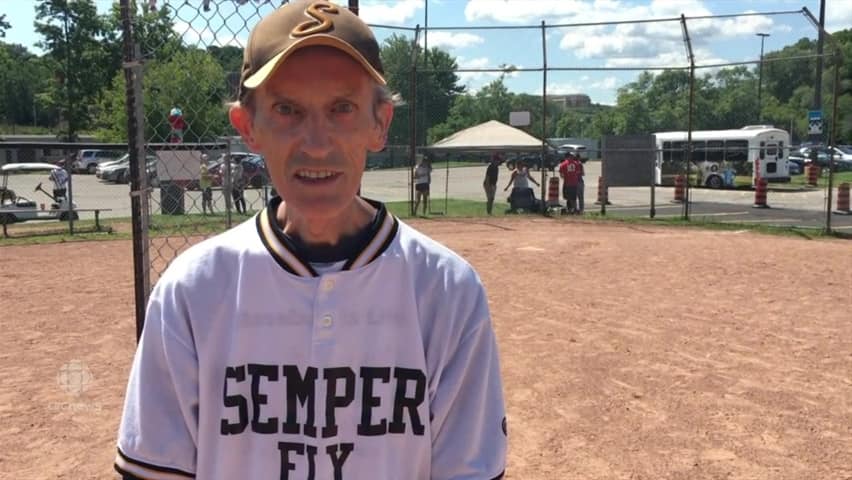 'Doc' Greenlee: Hero of the Hammer

1 year agoVideo
1:16
For the past 52 seasons James Greenlee has traveled thousands of kilometers to play three-pitch softball at McMaster University. 1:16

At 74, he can still run the bases and he got out there for a few games this year. But for the first time he sat out during the recent Phoenix Cup, the annual competition for the league's highest honour, choosing instead to lend his expertise as a coach to a team called Semper Fly.

It was a tough call for a competitor like Doc. When asked if he still wants to win after all these years, the response from his teammates was a quick laugh and a confident "Oh yeah!"

Still, what might seem like a simple game, summer tradition or desire to compete, is much more than that for Greenlee.

Curt Heckaman, one of the league's commissioners and Semper Fly teammate who has known Doc going on 20 years, described softball as his "first love."

"My first love died in 1998," he says, speaking about his first wife, Joanne. "But this is what kept me sane when she did, looking forward to this, coming back."

And come back he has. For over five decades the unique spirit of the G.S.A. league has pulled the retired history professor halfway across the country, from his home in Corner Brook, N.L. back to Hamilton, Ont., where he earned his degrees and first gave softball a swing.

"What's ... brought me back and what I enjoy the most is the culture of the league," he explained. "I like the ragging that goes on between teams, which is almost always good natured, you very seldom see a serious argument. You play hard and play to win, but nobody wishes anybody ill."

What Doc might not realize is that for many he's the personification of that special spirit.

Nick Latham is another Semper Fly player. He said the team is tight and one of the things that keeps them connected is their fearless captain.

"Every year this group gets together and part of the reason we get together and keep together is because we're close," he explained. "Jim is a very big part of that."

Greenlee has passed on plenty of lessons and inspiration, too, says Latham.

"He runs, he dives, he stops balls, slides into the bag, he's doing it all, at his age," he said before heading up to bat. "The things he has taught me about aging with grace are impressive."

Semper Fly was sporting several different versions of their jerseys during the tournament. The colours and lettering on some were bright and new, others faded and worn. But every jersey was worn proudly.

Team members on Semper Fly wear something else proudly, a nickname carefully selected for them by Doc. You're not really a member of the team until you've got a handle.

There's Bubbles, Xena and Dusty, whose name was inspired by his tendency to slide, as well as Gandalf, so named for his white beard.

The 68-year-old said the most remarkable thing about Doc is his devotion.

"It's quite inspiring," Heckaman said. "The fact this guy who graduated from Mac returns every year kind of underscores the fact that a lot of people feel that way about the league, that it's a special thing."

The league has seen players fall in love, get married and have kids who play in it. There's legacy there, says Heckaman, continuity, and the thread running through it all is Doc.

Greenlee, who credits the support of the university and the dedication of his fellow players with the league's longevity, says things have changed "enormously" over the decades.

Teams have come and gone and the rock-strewn outfields of the early days where players had to watch for vicious bounces and step carefully or risk their ankles, have been replaced with rolling grass and neat, chalk lines.

But one thing has stayed the same. Summer at McMaster means Doc on the diamond.

Then there's the mark he's left off the field.

The Phoenix Cup B-flight trophy bears his name, as does one of the diamonds. Below it, on a battered rusty sign, are the words ​​​​​​Semper Fidelis — always faithful.