Ergonomist David Antle thinks it's a good idea to discourage too much sedentary behaviour at the office but telling people to work standing up isn't necessarily the solution. He says it's movement that matters. Here's what he had to say about staying healthy through the work day. 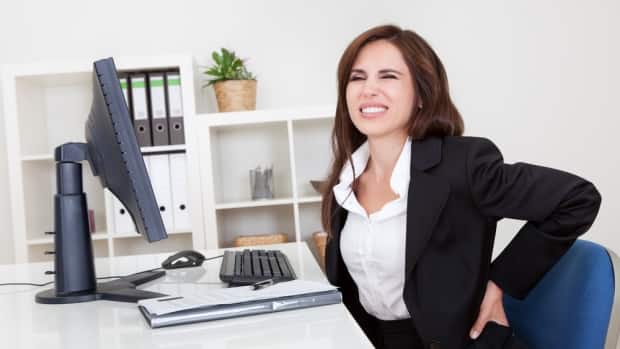 Hamilton5:33Why sitting at work is bad for your health
New British guidelines say we should be spending at least 2 hours a day at the office, standing up. We'll talk to ergonomist David Antle about the idea.

A new study from England says that office workers should spend at least two hours on their feet at work — though four hours would be better – to avoid the serious health consequences that come with too much sitting.

The study, published in the British Journal of Sports Medicine, said office workers spend 65 per cent to 75 per cent of their work day in their seats.

The study authors called for dramatic changes in the workplace including time dedicated to taking a walk as well as workspaces designed for standing.

Canadian ergonomist David Antle thinks it's a good idea to discourage too much sedentary behaviour at the office but telling people to work standing up isn't necessarily the solution. He says it's movement that matters. Here's an edited and abridged interview the CBC's Conrad Collaco had with Antle, research director and senior consultant at EWI Works, an ergonomics consulting company, about staying healthy through the work day. You can listen to the full interview by clicking the image above.

What do you make of recommendations that say we should spend two to four hours a day at work, standing up?

The article brings attention to the negative health consequences of sitting at work and sedentary practices throughout our day but they admit this is not an end point. People are looking at this ans seeing a need to stand to solve these problems. But they are pointing to the need for more movement. It's not just standing. Standing has some pretty serious physiological consequences as well.

What can we do to incorporate more movement into our work day?

Standing isn't easy. Some of the research that I've done indicates that there's an increased risk of blood pooling and discomfort and pressure in the lower limbs that might be linked to vascular disease. Jack Callaghan at Waterloo has shown that back pain can increase with standing or sitting. We need to design and organize our work so that promotes us to move. We are biologically designed as animals to move more than we do. We need to build our day in a manner that allows us to move. That may be as simple as making sure we take our breaks and get outside. Or that we design our offices so that people have to get up to get their printed documents or central resources. Or meetings are held in areas where everybody walks to.

Those ideas might help but won't likely get us close to being active two hours a day at work. What else can we do?

There is no substitute for leisure time physical activity. But if we were able to add 30 minutes or an hour worth of walking during the work day that would help maintain or boost the benefits you get from exercising out side of work. It's great if you can run or do a fitness class at work but that doesn't work for everyone. But it is possible to add a few subtle pieces of movement to your work day.

Do employers have to change the way they see how a sedentary work space affects employee health?

That's the underlying issue here. We have lots of good ideas and technologies. Our culture isn't designed to keep people away from their desk. Employees believe movement would be better for them but they believe their employer would be unhappy if they were away from their desk. There are some progressive companies that view their employees as their best asset and promote movement. We live in a society where it is acceptable for people to take ten minute smoke breaks but not to take ten minute walk breaks.