Authorities are bracing for parts of Hamilton to be underwater by the end of Friday as weeks worth of rain is expected to fall on the area.

And Mike Ryan of Lakeshore Road in Burlington was taking a leisurely walk.

This is the best time to take a walk, Ryan said. This is when interesting items wash up on the shore. Already this year, he's found a soggy leather motorcycle jacket and an urn labeled "Baby Girl." A couple of years ago, he found a buoy from a ship.

"This is the highest I've ever seen it," he said of the water levels. "I've seen bigger waves, but I've never seen the water this high."

Ryan wasn't alone in his observation. Environment Canada says as much as 90 mm of water will fall on Hamilton by the end of Saturday. Since 2 p.m. Thursday, 52 mm had fallen at the Royal Botanical Gardens. 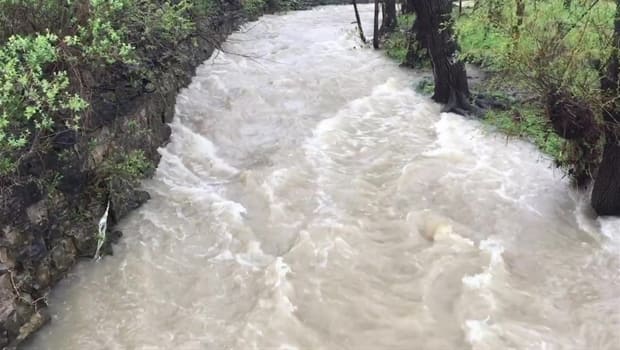 City water and wastewater workers waded down side streets on the beach strip, clearing manholes and grates. Workers throughout the city are spending Friday making sure culverts, outlets and inlets are clear, said Andrew Grice, director of Hamilton Water.

The city has closed a 1.5-kilometre stretch of York Road between Valley Road and Old Guelph Road in Dundas. That's a precautionary measure while crews assess a damaged culvert and embankment.

The province issued a statement Thursday afternoon, saying it's "standing by ready to help."

"As the situation continues to develop, we will monitor it very closely and quickly offer assistance where needed," said the statement from Municipal Affairs Minister Bill Mauro and Marie-France Lalonde, Minister of Community Safety and Correctional Services.

This weather shouldn't surprise us, said Paulin Coulibaly. He's a McMaster University professor and scientific director of Floodnet, as well as and a member of the McMaster Centre for Climate Change.

This is climate change in action, said Coulibaly. As the planet warms, it causes more evaporation, which causes weather systems that drift and hover over areas for more extended periods of time.

Cities such as Hamilton have to design more resilient structures, he said, and have more park and grassland areas to absorb the water. And with climate change happening at faster rates than initially predicted, there's no time to waste.

To report flooding or fallen trees and debris, call 905-546-CITY (2489). The city has also offered tips to prevent your home from flooding. Calvin Huizinga of Hamilton Water at a flooded street