A biology professor at Trent University says algae blooms in the Great Lakes could mean your beach plans might be cancelled. 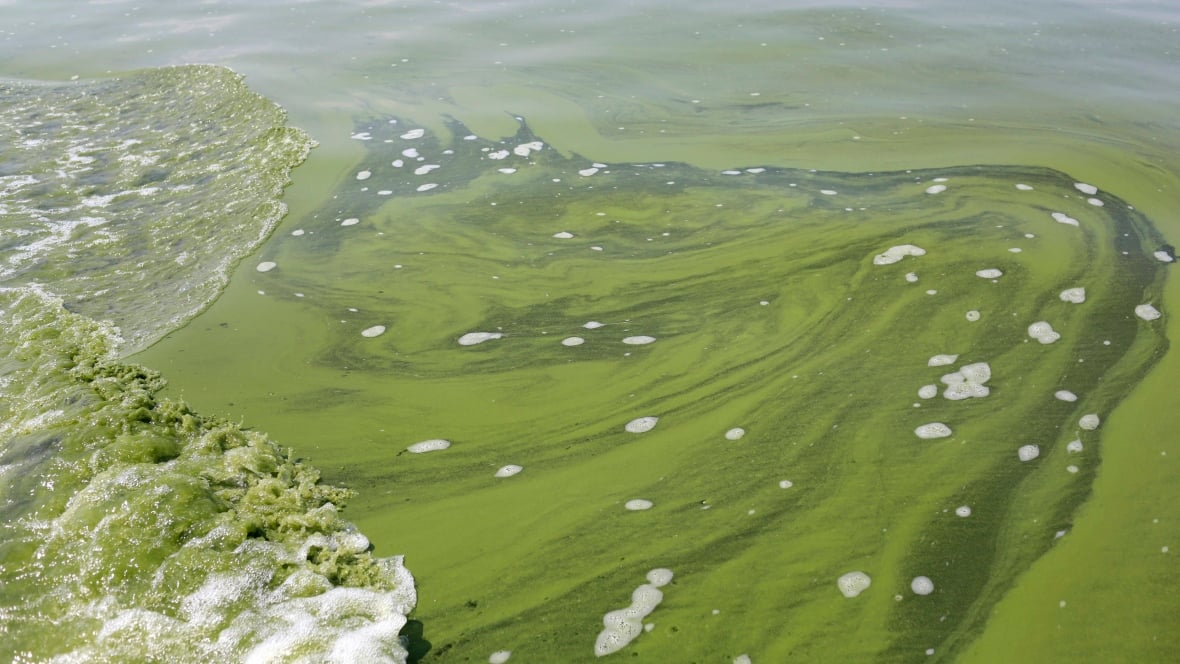 What's blue and green and can end your late-summer Ontario beach plans in a hurry?

Blue-green algae can smell like freshly cut lawn or rotting garbage. And it might be coming to a Great Lake near you this August.

It's a visible, green scum that accumulates at the top of the lake.- Paul Frost, Trent University algae expert

Trent University biologist Paul Frost has studied blue-green algae for many years. He spoke with the CBC's Conrad Collaco about why the algae is bad for Ontario Lakes and what we should be doing about it.

Some varieties of the algae can produce toxins harmful to both humans and animals. And, the Ministry of the Environment and Climate Change recommends not eating fish from lakes where the algae is present.

If you suspect you've come across blue-green algae, don't drink the water or bathe or swim in it. And keep your pets out of it too. If you or your pet see or ingest blue-green algae, call the Spills Action Centre at 1-800-268-6060.

Listen to the full audio interview by clicking the image above. Or, read the abridged and edited transcript below for a text version of the conversation.

What is the forecast for algae blooms in the Great Lakes this summer?

The forecast for algal blooms is pretty large and severe but specifically for Lake Erie where they have a mathematical model that would predict an algal bloom like you would predict a weather event like a rain storm. For other lakes we don't have a model so we just guess based on recent weather. It will probably be about the same as what we've had in the past few years, which is bad algal blooms in some of our lakes.

Are we seeing larger algal blooms over the last few years?

Not necessarily. In some lakes the blooms appear to be starting earlier and lasting longer and are larger, but this is connected to the amount of external nutrients coning in to the lake and the lake temperature in the middle of summer. In Lake Erie, for example, we had a wet spring which led to more nutrients coming in then a warm summer which sets us up for a pretty bad algal bloom in that lake. That doesn't necessarily translate to smaller lakes or some of the cottage lakes.

What do the algae blooms affect? Why should people care?

It also discolours the water and makes it less pleasant to go boating or fishing in. Certain bacteria will produce toxins which can negatively affect human health as well as pets and livestock. You wouldn't really want to swim around in a lake with an algal bloom because you might get sick. Certain types will grow in in excessive amount and wash up on beaches and you'll see this green gunk along the shore lines that starts to rot.

The smell that you would associate with algae on shore is a particular kind of algae that grows in the bottom of the lake called cladophora. In the past, massive amounts of cladophora would wash to shore. When that starts to decompose it produces really bad smells.

Does the weather affect algae growth?

Yes. Algae is a plant that needs sunlight so if you have long cloudy periods it yields less algal growth. They also need nutrients and nutrients are delivered to lakes by runoff. A couple weeks of really warm weather will increase the water temperature and make the algae grow faster.

What should people do to prevent algal blooms?

Reduce external nutrients going in to the lakes. You can't control the weather. There have been efforts by governments to reduce external nutrient loading by better sewage treatment plants. Years ago they took phosphates out of laundry detergents which had a positive affect on reducing algea.

Now the focus is more on what we would call diffused nutrient sources. These are sources of nutrients coming from scattered places in the catchments like storm water treatment ponds or from farm land.  People living on the shore lines of lakes have to think about trying to reduce nutrients. Fertilize less. Keep a natural shoreline. Pick up your pet waste. It all has a positive value to reduce nutrient load into lakes.

What should government be doing?

The spills hotline (1-800-268-6060) is good but there's a lot more that could be done. We need to have more sustained and organized efforts at the provincial level to more systematically monitor water quality and algal growth. Governments have many pieces of legislation to reduce nutrients many include voluntary programs. We need to make those regulations more strict and make them required.

Finally there needs to be a renewed investment in basic research and science which has been suffering over the last 10-15 years in Canada.

This summer, keep an eye out for green, scummy lakes. If you see one, call the hotline — otherwise you don't really have much to worry about.