Trevor Copp and Jeff Fox are teaching people, from survivors of abuse to same-sex couples to people who just want to dance, how to share the lead.

These dancers teach people, from survivors of abuse to people who just want to dance, how to share the lead

Jeff Fox had an unusual role at his student's wedding about three years ago. He danced with her down the aisle.

It was fitting. Liquid leading, a method of dual leading that Fox devised with fellow ballroom dancer Trevor Copp, was part of what made the marriage possible in the first place.

The student had just been in an abusive relationship, so being pushed backward around a dance floor would have felt too vulnerable. Fox, rather than spinning her around, gave up his own power, and he taught her how to lead. This back-and-forth helped her gain confidence to get into a new relationship, and eventually get married.

"I danced her down the aisle," he said, "just to see that victory unfold."

The concept of liquid leading, where people take equally assertive roles on the dance floor regardless of gender, is gaining steam. It's not just as a novelty, they say. It has political power, and carries therapeutic and healing qualities too. And Copp, a downtown Hamilton resident, and Fox, from Kitchener, are teaching it all over the world. 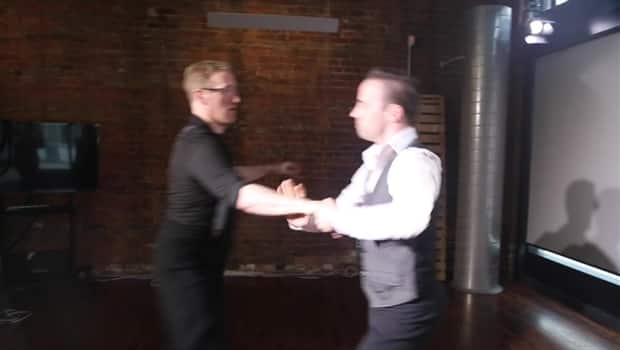 They present to LGBTQ groups. They present to women's groups. Last month, they were keynote speakers at a Planned Parenthood conference in Virginia, where they tackled the subject of dancing and consent. Their TEDx talk from 2015 has 650,000 views so far. This month, they'll present at a women's prison.

This gender democracy – the idea that both people, regardless of gender, can lead and follow – is key to the concept.

With liquid leading, they say, straight men can dance with other straight men. Same-sex couples can swap back and forth with a wedding dance that has them on equal footing. Gender non-binary people don't have to pick who's in the male role. There doesn't have to be a male role at all.

The traditional concept of dancing, Copp said, is women standing against a wall waiting to be asked to dance, then men guiding the steps. For a lot of people, that doesn't fit.

"There's a whole different power that comes in when I say, 'Now you can lead me. Now you're the one who's going to make decisions about what happens on this floor,'" said Copp, who also runs Burlington's Tottering Biped Theatre. "That's an exciting kind of embodied therapy that's been tremendous to work with."

It's been a few years since Copp and Fox discovered they could both lead.

They were instructors at Fred Astaire Dance Studios, Copp in Hamilton and Fox in Kitchener. They both attended an annual event. Fox was a more advanced dancer, Copp said, and he wanted to learn some techniques from him. So he approached Fox and asked him to dance.

They weren't the first men to ever dance together. In some cultures, Copp said, men dance together all the time. It's North Americans who seem to have a hang up about it. "There's this terror in our culture of men making contact with each other."

When men dance together, Fox said, there's typically a conversation about who'll lead and who'll follow. But as he and Copp danced together, that gradually fell away. They started switching who led, not from song to song, but even within the same dance.

From a physical perspective, they should have been incompatible, Copp said. Fox has broader shoulders and is three inches taller.

"What's surprising is how quickly and simply it just worked," he said. "He would lead me. Without pausing, I would lead him back."

After that, they took it on the road. They showed up at clubs and events and cleared the floor as everyone watched their unique method of swapping spins and dips. A dramaturge saw them dance and approached them afterward, and said, "Do you realize how political that was?"

It hadn't occurred to them, but it did then. The pair developed a play, First Dance, about a same-sex couple working out their wedding dance.

That's when a TEDx curator spotted them and asked them to present in Montreal. Since then, they've done about six full presentations a year, if not more.

The pair do other things. Copp is an actor, choreographer and mime who's coached two pairs of world salsa champions. Fox is a full-time dance instructor with a black belt martial artist, and the creative content curator for OutFest, an annual Kitchener-Waterloo arts festival.

As for liquid leading, their mission is broader now. They'll keep hitting up the clubs (Hamilton, Copp said, has "a hopping salsa scene") and keep presenting. They envision a world where sharing the lead becomes the norm, and dancing is neither a male nor female-led endeavor.

It's not just a simple matter of deciding who leads the dance, Copp said. When one person is in control, "that just creates the same problematic structure."

Letting a student lead like the one he danced down the aisle, Fox said, "is a way of saying 'you take the wheel.'"

"It's not only just the switching of lead and follow that we get so avid and passionate about. It's that idea that you don't have to play one role or the other."