Dundas dad makes his own Zamboni for backyard rink

Conrad Galambos took cues from the Internet to build his own ice resurfacer.

It involves a bucket of hot water, a valve, a wagon and a broom

You've built a backyard rink. Neighbourhood kids come over to lace up their skates. But soon, the ice is bumpy as gravel. What do you do?

If you're Conrad Galambos, you make a backyard Zamboni.

"I used to just drop a pail of water on the rink," said Galambos. He's a marketing consultant, but he's also "a pretty handy guy" with a garage full of personal projects.

His "Galamboni" "puts a much finer layer of ice on (the rink), which allows it to freeze quicker and kids to get back on it sooner."

This is the second year for the Galambos backyard rink. There, his six-year-old son and four-year-old daughter skate, as well as neighbourhood kids. He uses a plastic liner to prevent water from escaping. 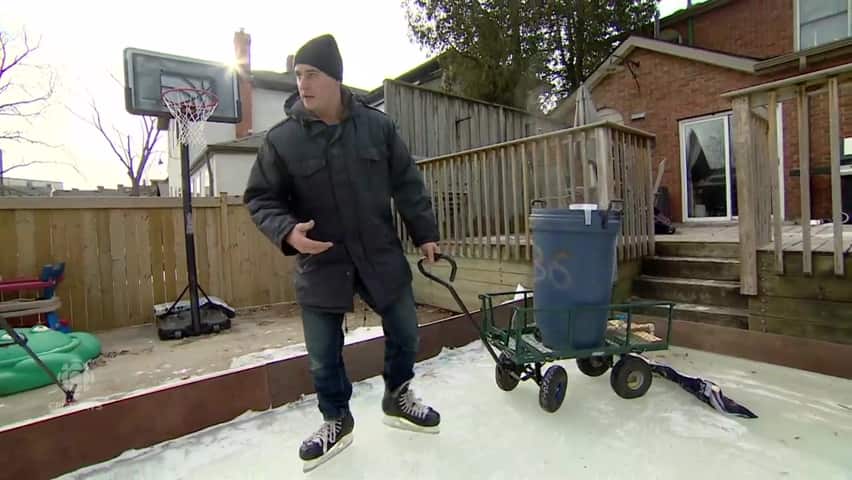 4 years ago
1:45
Conrad Galambos built a homemade Zamboni for his backyard rink in Dundas, Ont. 1:45

Before the Galamboni, he just used a hose to flood the ice. But it would create a thick layer of water that took a long time to freeze.

His Galamboni involves a bucket of hot water on a little trailer. There's a valve connecting the water to the wide broom on the ground, so he can turn the water on and off. Then he just grabs the handle and pulls it around.

Such contraptions conserve water too. Using the hose took six buckets, he said. His ice resurfacer uses one.

Galambos and his friends have another project in the works. They searched the Internet for brackets that will hold the boards together better. They're taking notes to create their own.

The rink project, he said, "is more fun than anything."