Air India 182: How much does Canada care about the worst mass murder in its history?

Dr. Chandrima Chakraborty from McMaster University takes a look at what place the worst mass murder in Canada's history has in the minds of Canadians.

In 1985, 329 people were killed including 280 Canadian citizens in the Air India bombing 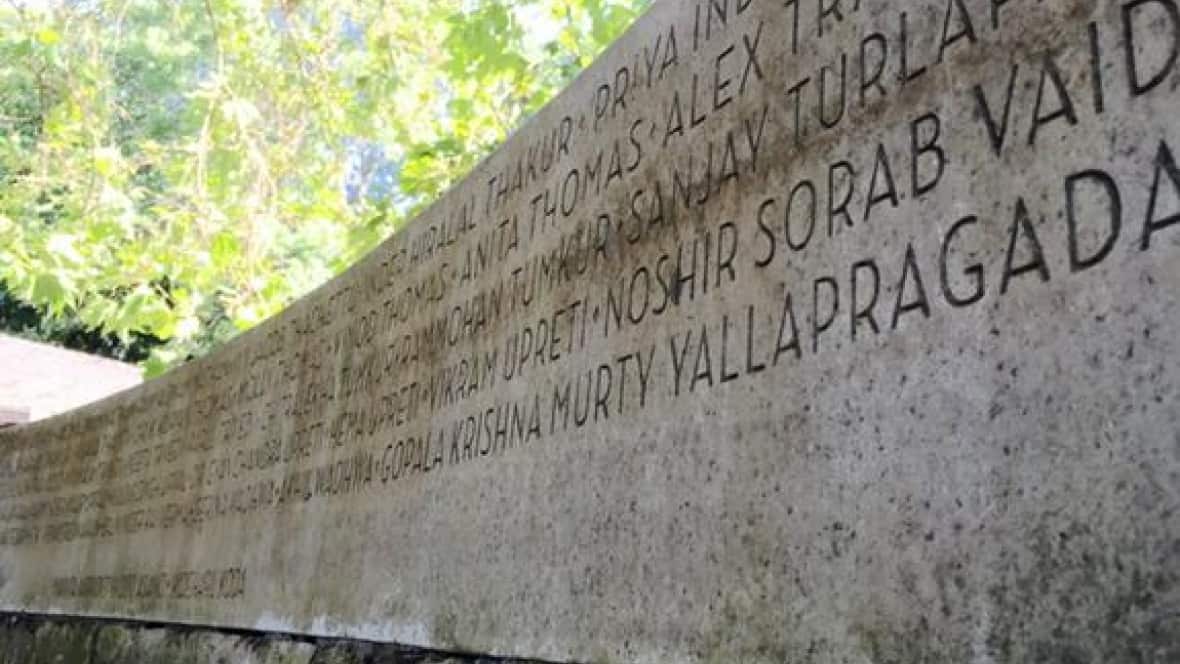 Until Sept. 11, 2001, the 1985 bombing of Air India flight 182 was the deadliest terrorist attack anywhere, ever. It remains the worst mass murder in Canadian history.

On June 23 of that year, 329 people were killed, including 280 Canadians and 86 children. The flight left Toronto, then Montreal bound for London, then India. It disappeared from radar off the coast of Ireland where the search for survivors and answers began. The attack was planned by a group of B.C. Sikh separatists led by a preacher named Talwinder Singh Parmar.

Dr. Chandrima Chakraborty, a professor of English and Cultural studies at McMaster University, says that when the bombing happened it was not considered by the Canadian government and the public as a Canadian tragedy.

Chakraborty is an editor of the newly published anthology, Remembering Air India: The Art of Public Mourning. She spoke with the CBC's Conrad Collaco about the worst mass murder in Canadian history and how it is perceived today and in the years since the bombing.

Listen to the full interview by clicking the image at the top of the page, or read an edited and abridged transcript below.

When you began your research on the bombing why do you think, so many years later, there was no academic study on the mass murder?

There were a lot of journalistic works and there was one scholarly piece by Dr. Angela Failler who is one of the co-editors of Remembering Air India: The Art of Public Mourning. Apart from that there was nothing. I think the reason for that is the Canadian government saw this tragedy as not it's own. Not of serious significance to Canada. In the initial framing of the bombing it was seen as a foreign tragedy.

The plane did not blow up at Pearson. It was in Ireland. It was all seen as far away. It was on an Air India carrier. It was seen as Indians on an Indian plane going to India. Despite the bombing being planned and executed in Canada and many of the passengers being Canadian citizens it was not seen as being Canadian. It was seen as a foreign tragedy. You did not have academic interest. You had journalistic articles. That meant you did not have a study of what happened, what was the impact of the bombing, what was the grief or what kinds of loss the families were going through.

Has the perception of the bombing changed in the years after it took place?

Post 9/11 there has been a renewed interest. You can see that in terms of the public inquiry report that came out in 2010 — June 23rd being declared as the national day of remembrance for victims of terrorism. There has been renewed state interest. Therefore you have seen more interest in finding out what happened but that post 9/11 remembering was strategic. It was a way of demonstrating Canada's vulnerability to terror and terrorism.

So, although you have scholarly articles that came out that looked at where terrorism funding comes from or why is there terrorism in Canada, the grief of the families or the fact that the families felt ignored or deserted — and even made suspect by their government — was not acknowledged even in the scholarship that was coming out. It was all about terror and how do we stop terrorists. It wasn't about grief. It wasn't about what was happening in terms of multi-cultural Canada and why these Canadians were ignored for so long.

How do the families of the victims view the way the tragedy has been treated in Canada over these years?

I've been doing interviews with people who lost family members and friends in the Air India bombing. The families feel ignored. They feel they have not been rendered justice by their government both in their immediate experience after the bombing and in the years after the bombing. A number of families told me when they were in Cork (Ireland) looking for help you had help from Air India, the Indian High Commission but there were no Canadian officials. There was no grief counseling. The Irish jumped in and helped out but the Canadian government, officials and agencies were missing.

They felt they were deserted right after the bombing and in the years that followed. Families would constantly talk about the mishandling of evidence and the turf war happening between the RCMP and CSIS that did not result in a prosecution. They felt they were ignored by the government of the time, governments that followed and the legal system — that they did not get justice.

What have you found that explains the mismatch between the scale of the tragedy and how it is viewed in the public's memory today?

My... students will say 'we are born here, we grew up here if this is Canada's tragedy how come we never knew about it before I registered for this course?'- Dr. Chandrima Chakraborty

In 2016 at McMaster [University] we organized an international conference to commemorate the 30th year of the Air India bombings. We had family members, international scholars and creative artists come in. It was open to the wider public. What we found at the conference was that very few people knew about it. And, even if they knew it was because of, say, CBC reporting but it had not really sunk into the psyche of Canadians that this is our loss, that this is our tragedy.

I still teach materials on the Air India tragedy both in my undergraduate classes as well as my graduate classes and students will say 'we are born here, we grew up here if this is Canada's tragedy how come we never knew about it before I registered for this course?'

If it were to happen today do you think the tragedy would be viewed differently?

Today you would not have an unaccompanied suitcase on a plane. Our laws have changed. Our security at the airport has changed. Social media would have changed how the news would have been reported. The question to ask is what is Canadian and what is not Canadian. Who does the framing?

In 1985 and 2017 it is a Canadian tragedy. Many of them were Canadian citizens and many permanent residents. The children they lost were born and brought up in Canada. Now it is a question of framing. Who has the power to frame that discourse? Who is marked as Canadian and who is perpetually a foreigner? Who frames which bodies belong to the nation and which bodies don't?   ​