Poor planning by various levels of police, along with orders by a Toronto deputy police chief to "take back the streets," are to blame for the more than 1,100 arrests during the 2010 summit, says the province's top civilian police watchdog.

'It is fortunate that, in all the confusion, there were no deaths,' Ontario civilian police watchdog says 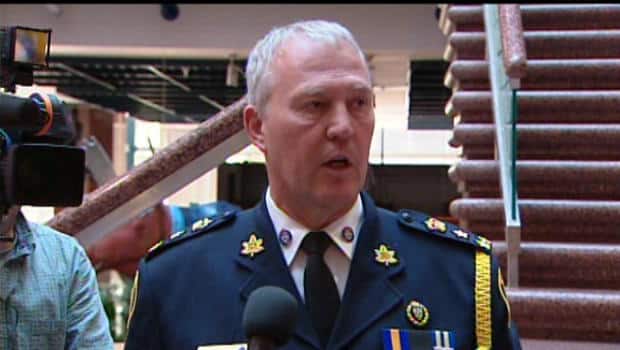 Poor planning by the RCMP, OPP and Toronto police for the G20 summit, along with orders by a Toronto deputy police chief to "take back the streets," are to blame for the more than 1,100 arrests during the 2010 weekend summit, says the province's top civilian police watchdog.

"What occurred over the course of the weekend resulted in the largest mass arrests in Canadian history. These disturbances had a profound impact not only on the citizens of Toronto and Canada generally, but on public confidence in the police as well," writes Gerry McNeilly, head of the Office of the Independent Police Review Director (OIPRD), a citizen agency that today tabled the 300- page systemic review report.

Overall, McNeilly says, the G20 was an unprecedented event in the city’s history — one police forces were unprepared for.

"It is fortunate that, in all the confusion, there were no deaths," McNeilly writes.

McNeilly concludes that police had legitimate concerns and faced challenges tracking "black bloc" vandals intent on violence and criminal activity as they hid within crowds of peaceful demonstrators.

But the OIPRD reports that police also had a responsibility to balance law enforcement with citizens' rights to demonstrate.

He concluded some officers used "excessive force" to clamp down on any and all protesters, with Toronto police commanders acting on orders for mass arrests.

Deputy Chief Tony Warr issued such a directive late on June 26 following a day in which police lost control and saw windows smashed and a police car set ablaze.

"The night shift incident commander said Deputy police Chief Warr told him that he wanted him to take back the streets," writes McNeilly in the report. McNeilly said the commander told him, "'I understood his [Warr's] instructions to mean that he wanted me to make the streets of Toronto safe again. He wanted the streets that had been made unsafe by the terrorists that were attacking our city to be made safe again by restoring order.'"

Referring to protesters in such a way left the impression that they were criminals, the report says, and that attitude resulted in the decision to contain and arrest approximately 1,100 people during the weekend summit.

McNeilly concludes that specific order led to 10 separate incidents where police "kettled," or trapped, large crowds of protesters before arresting them in a bid to stem the protests and any further criminal activity.

The OIPRD report details incidents at Toronto’s Queen Street and Spadina Avenue, and along the Esplanade, as well as a decision to arrest peaceful demonstrators gathered on the lawn at Ontario’s legislature in an area designated by G20 police organizers for peaceful protests.

Gerry McNeilly, head of Ontario's Office of the Independent Police Review Director, is a former justice of the peace and deputy judge who also served as executive director of  Legal Aid Manitoba for nine years. He served for four years as head of what is now the Human Rights Tribunal of Ontario. McNeilly has two adult daughters. He is a graduate of York University and has a law degree from Queen's University.

"It is fair to say that the level of force used in controlling the crowds and making arrests at Queen’s Park was higher than anything the general public had witnessed before in Toronto. In some cases, the use of force was excessive," McNeilly concludes, pointing out the G20 was the first mass protest event of its magnitude that many frontline officers had ever encountered.

McNeilly says Toronto Police Services Chief Bill Blair intervened to end one kettling incident in which hundreds of protesters as well as residents and passersby were held for hours at the intersection of Queen and Spadina late on June 27 as the summit was winding down.

"About 400 people were detained in pouring rain for four hours while the arrests were being processed," McNeilly states. "In the end, Chief Blair himself went to the [Major Incident Command Centre]. He called the incident commander and the public information officer out of a meeting and ordered that the people at Queen and Spadina be released unconditionally and immediately."

By then, more than 300 people had been arrested or detained, mostly for breach of peace. The reports says it was "unreasonable and unnecessary" to arrest people one by one during a severe rainstorm.

Chief Blair admitted during an afternoon news conference that his force made mistakes during the G20. "In hindsight, there  are some things that certainly we could have done better," he said. "The challenges we faced were unprecedented."

"Mr. McNeilly has acknowledged many things were done very well and some things, quite frankly, we need to learn lessons and do them better."

Blair said he takes McNeilly's recommendations "quite seriously" and promised that officers would be held accountable if misconduct is proven.

The number of people police stopped and searched in downtown Toronto increased exponentially between June 25 and June 27. The report concludes that officers overstepped their authority by stopping and searching people arbitrarily, with many officers ignoring "the basic rights citizens have."

The Canadian Civil Liberties Association demanded that action be taken against senior command officers "responsible for the decisions that violated the civil liberties of hundreds of Canadians."

"We know that there were rights violations on a massive scale," said Abby Deshman, public safety director of the Canadian Civil Liberties Association. ""What we need now is accountability."

The report cites major problems with both the design and treatment of arrestees at a large mass detention centre set up in the east end of the city which was used to house hundreds of people.

McNeilly concludes that the decision by Prime Minister Stephen Harper to expand the G8 meeting in Huntsville, Ont., to a full blown meeting of the G20 leaders in Toronto just four months before the event posed serious challenges.

"As a result of these short timelines, planning was rushed and inadequate, leading to a breakdown in executing many of the operations during the event itself," McNeilly writes.

The OIPRD cites one small example to illustrate basic problems of assembling and co-ordinating thousands of out of town officers from across Canada who joined Toronto during the summit.

"One commander said he was never exactly sure where he was going as they were continually loading and unloading off buses. Another said that a colleague picked up a rudimentary map from a subway box to assist them with getting around the downtown core," the report states.

The OIPRD report concludes there were breakdowns in communication and command structures between the RCMP, which co-ordinated planning the event and had primary responsibility for security of world leaders inside the G20 security zone; the Ontario Provincial Police, which had responsibility for securing the G8 meeting in Huntsville; and the Toronto Police Service which was the lead force working in the [Integrated Security Unit] to secure areas of Toronto outside the summit site.

Protesters, police both resorted to violence

McNeilly spoke to reporters following the release of the report Wednesday, saying many officers followed the law and carried out their duties with diligence and respect.

"[They] should be and must be commended," he said.

A common pattern emerged, however, from complaints his office received.

"The common themes were allegations of unlawful searches, unlawful arrests, excessive use of force, improper detention and issues related to the prison’s processing centre," he said.

He also said interviews with police suggest that officers were hit with objects, spat upon, sprayed with urine and verbally abused or taunted.

Do you agree with the report's recommendations? Take our survey.

The OIPRD report recommends a number of improvements for any future event, including better planning and enhanced co-operation between police forces, more training for officers about the limits of police powers, and more flexible plans to deal with fluid mass protest scenarios. It also calls for enhanced communication between police command centres and frontline officers, and says any future mass detention centres need to provide for the needs and dignity of individuals arrested.

He calls for all police officers to be required to wear visible name badges and be given better training on the limits and responsibility police powers.

Tommy Taylor, who says he and his wife were arrested and held in handcuffs for 24 hours at the G20 detention centre, told  media after the release of the report that any blame should fall on high-ranking members of the police force, not frontline officers.

"Being anti-protester, being anti-police, either of those positions is ignorant and doesn’t move us forward," he said.

Taylor also expressed disappointment that McNeilly merely "hopes" that his recommendations will be adopted.

The OIPDR makes 15 general conclusions, and 42 recommendations after reviewing tens of thousands of documents, videos, police documents and interviews with police and protesters from across Canada.