Nearly two years after Marketplace exposed the common practice of aggressive sales tactics at the largest Canadian-owned funeral home chain, another hidden camera investigation has revealed new examples of upselling and rule-breaking by some staff.

Nearly two years after Marketplace exposed the common practice of aggressive sales tactics at the largest Canadian-owned funeral home chain, another hidden camera investigation has revealed new examples of upselling and rule-breaking by some staff.

Arbor Memorial was the subject of a 2017 investigation, which revealed huge markups, confusing charges and pushy tactics by sales staff on commission at branches in Ontario.

That investigation prompted the Bereavement Authority of Ontario (BAO), which regulates the province's funeral industry, to introduce new protections outlawing some of the behaviour documented by Marketplace.

"I took action right away," said BAO registrar Carey Smith, who noted that Arbor management came to see him immediately after the investigation and promised to change its practices.

In particular, the BAO cracked down on two specific policies: charging a handling fee when customers choose to buy a casket from another provider; and the refusal of some staff to make inexpensive caskets available for funeral services.

But when Marketplace returned to five Arbor funeral homes in Ontario earlier this year, one of those new rules wasn't always being followed.

At one location, a salesperson refused to sell the cheapest casket to our undercover producers, who were requesting a simple service followed by cremation.

"It's not for visitation," she said. "Not for your funeral service."

Watch as an Arbor salesperson refuses to sell a casket on the showroom floor: 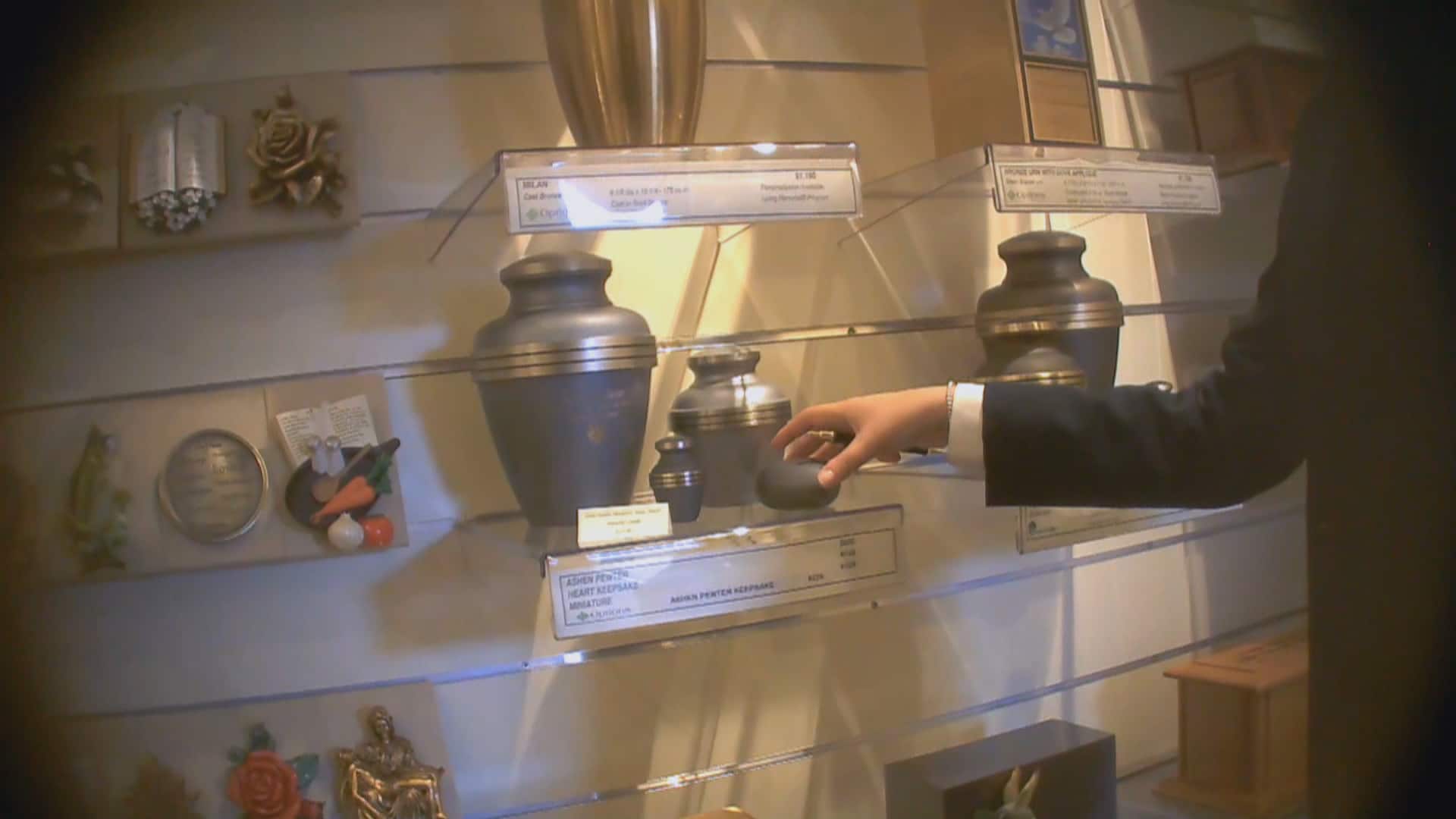 2 years agoVideo
0:34
Marketplace returned to five Arbor funeral homes in Ontario with hidden cameras to see if new guidelines around upselling are being followed. 0:34

That surprised Smith; if a casket is in a showroom, that means it's available for sale, he said.

"I'm disappointed … We've had assurances that this sort of conduct won't happen," said Smith. "They should know better."

Arbor Memorial's salespeople can receive a commission on products they sell, so a more expensive casket could result in greater compensation. At two other Arbor locations visited by Marketplace, the salespeople explained customers could purchase any casket they wished, but steered them away from the least expensive option — an $890 engineered-wood pine casket — and toward caskets closer to the $2,000 range.

Watch as an Arbor salesperson steers producers toward a more costly casket: 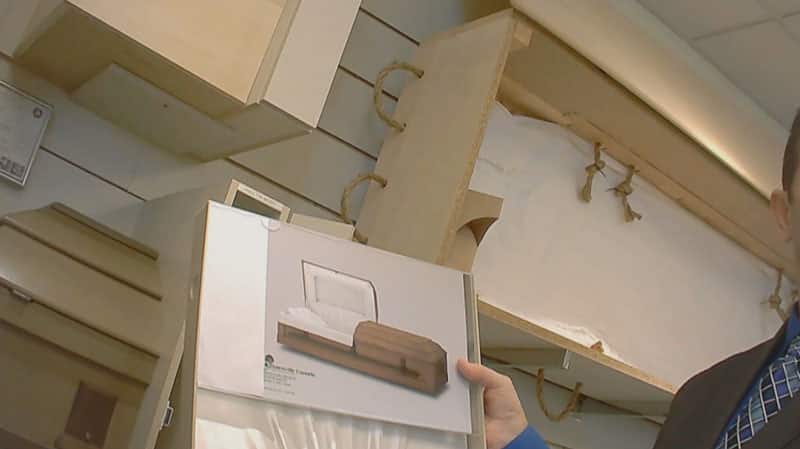 'Give them some of that dignity back'

2 years agoVideo
0:49
Marketplace returned to five Arbor funeral homes in Ontario with hidden cameras to see if new guidelines around upselling are being followed. 0:49

"It's just a beautiful casket," one salesperson explained. "Your aunt, or your mom or dad, lose a lot of dignity when they're going through a sickness or illness, the least you can do is give them some of that dignity back.... It's for them."

While such sales tactics aren't against the rules, Smith said it's "playing on the emotions" of a grieving consumer and could be seen as "distasteful."

"I don't like people preying on people's vulnerabilities," he said.

Marketplace also showed the video to Shane Neufeld, a former Arbor funeral director who now runs an independent business in Winnipeg. His company charges a professional fee, but sells other products, like caskets, at cost.

"I think it's interesting that they see that the path to dignity is to spend more money," Neufeld said of the sales pitch captured by the hidden camera. "I don't make that connection myself."

The latest investigation found that all five Arbor homes surveyed are following a new rule around the use of an outside casket. Previously, customers who brought in a container from another provider, such as Amazon or Costco, were charged a $595 handling fee by Arbor. That fee has been eliminated.

In a statement to Marketplace, Arbor Memorial said it has "openly embraced and adopted industry-wide changes" and "significantly enhanced training programs" over the past year.

Arbor also said the company's "top priority is to listen to our families" and an ongoing, third-party customer experience survey found that 90 per cent of the families it serves are "very satisfied."

The company operates more than 100 funeral homes across the country, along with a number of cemeteries and crematoria.

Understanding what's required — and what isn't

The funeral business is unique in that its customers are often at their most vulnerable and could be particularly susceptible to sales pressure. Comparison shopping is rarely considered and customers often arrive unaware of what really needs to be done for their loved ones.

One common misconception involves embalming, which is rarely required by law and in most cases offers no public health benefit. The procedure is used to give bodies a more lifelike appearance for viewing or visitation, but refrigeration of the deceased can often serve the same function in the immediate days following death.

As more Canadians choose cremation, embalming is increasingly being used less — though funeral salespeople may continue to push it.

Randy and Monique Wright were shocked to learn embalming wasn't required after their experience arranging a funeral for Randy's seriously ill mother at an Arbor branch in Winnipeg.

The salesperson made them believe embalming and a viewing was required, they said.

"It would have been awful," said Randy, noting his mother was an extremely private person who wouldn't have wanted a viewing. "It would have made me sick."

The couple signed a contract. Then they saw Marketplace's 2017 investigation into the practice of upselling in the funeral business.

"We were just aghast. It was like, 'Oh my goodness, that's us,'" recalled Monique.

The couple contacted Neufeld, who assisted the Wrights in cancelling their agreement. They said their complaint was never about the money; it was about being forced down a path they didn't want for their loved one.

"It was about them taking advantage of us," Monique said. "It's unconscionable to me that they do these things. It's despicable."

Neufeld suggests that anyone in need of funeral services do what they would do for any other major purchase.

"The best and most effective thing for anyone is just to be educated," he said. "Know in advance what you're walking into. Do a little bit of research. It's OK to call around."