Divers beneath the Arctic sea ice offer a live video tour at the wreck of the Franklin Expedition's HMS Erebus today. 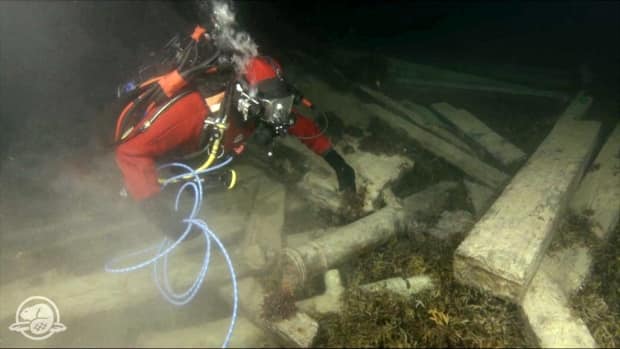 6 years ago
9:34
Parks Canada divers beneath the Arctic sea ice explore the remains of the Franklin Expedition's HMS Erebus 9:34

Divers beneath the Arctic sea ice offered a live video tour at the wreck of the Franklin Expedition's HMS Erebus today.

Holes had been cut through the ice, which is now about two metres deep, to give Royal Canadian Navy divers and Parks Canada underwater archeologists a chance to continue exploration of the 19th-century wreck discovered late last summer in the Queen Maud Gulf off Nunavut.

Park Canada had initially said a pre-recorded video would be released at the Royal Ontario Museum in Toronto, providing an "up-close-and-personal" look at the ship that was one half of the ill-fated polar expedition led by Sir John Franklin in the 1840s.

But instead, at the Toronto event on Thursday afternoon, divers Marc-Andre Bernier and Ryan Harris, with a live video connection, provided the show. Viewers were able to see the vivid remains of Erebus and, with several technical interruptions, hear descriptions by the underwater crew.

The divers were also able to answer questions from students gathered at the ROM.

A video of the live event was released later.

The earlier video, along with photos released Wednesday, were scheduled to provide the first public look at a complex operation that is being done in conjunction with Joint Task Force (North)'s annual high Arctic sovereignty operation, Nunalivut.

Underwater archeologists anticipated correctly that spring diving conditions would create good viewing opportunities for the wreck, which was found in water about 11 metres deep.

Jennifer Chung, a Grade 7 student at University of Toronto Schools, said she was overwhelmed by the guided underwater video tour.

"It was an amazing thing to experience," she told CBC News.

The amount of ice cover eliminates wave action, and any particulate in the water will have settled down to the sea floor, creating ideal conditions for recording details of the ship.

"It's almost like diving in an aquarium," Harris, a senior underwater archeologist for Parks Canada, said earlier this month.

Dives are expected to continue until Friday, weather permitting.

Underwater archeologists, who will be using a new high-tech, 3-D laser scanning tool, want to create a thorough recording of the wreck before delving more deeply within it.

Inside the reinforced wooden warship, however, lies huge potential for revealing answers to some of the many mysteries surrounding the sad fate of the expedition launched in a quest to find the Northwest Passage.

Are there journals or notes safely sealed inside cannisters where British sailors renowned for documentation may have kept records of what was happening on the expedition? Are there human remains?

Maybe there will be something that can shed more light on whether lead played a significant role in the demise of the sailors, as has been the subject of much discussion over the years.

HMS Erebus was one half of the Franklin expedition, along with HMS Terror, which left England with 128 crew members amid much hope and optimism in 1845. But the ships were beset by ice in 1846 and abandoned two years later off the west side of King William Island, according to Inuit accounts.

Erebus was discovered late last summer, and underwater archeologists recovered the ship's bell. They had a chance to do limited diving around the wreck, which is covered in kelp, before blustery weather prompted a retreat from the site.

The search for HMS Terror is expected to continue this summer.