'Frankenstorm' may be headed for Eastern Canada, U.S.

Weather forecasters are predicting that Hurricane Sandy could merge with another weather system as it moves north, and bring a "Frankenstorm" to parts of Eastern Canada and the U.S. in time for Halloween.

Rain, wind could sweep from southern Ontario to Maritimes in time for Halloween 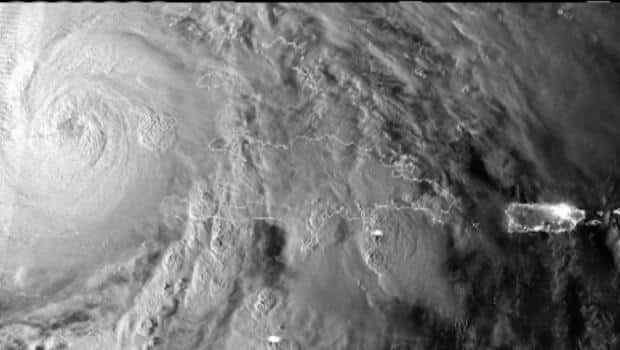 'Frankenstorm' on its way

8 years agoVideo
4:00
Weather forecasters are predicting that Hurricane Sandy could merge with another weather system as it moves north and bring a 'Frankenstorm' to Canada in time for Halloween 4:00

Weather forecasters are predicting that Hurricane Sandy could merge with another weather system as it moves, bringing a "Frankenstorm" to parts of Eastern Canada and the U.S. in time for Halloween.

The hurricane, which swept through the Caribbean and left the Bahamas Friday, has been downgraded to Category 1 as it heads north for Florida this weekend. The weather system could hit the U.S. northeast early next week as a tropical storm, according to CBC meteorologist Jay Scotland.

As it curves northward and hooks left, Sandy could merge with the remnants of a cold front, creating a monster storm, he added.

"Despite the comical name … Frankenstorm is a pretty decent analogy, because we are taking spare parts from another storm and combining it with Sandy, and this will become a powerful, what is known as a hybrid nor'easter storm. A potent coastal fall storm," he said Friday.

The resulting storm could be widespread for Eastern Canada, with potential wind and rain from southern Ontario through to southern Quebec to the Maritimes, although "there is still potential for swings" in its path.

The remnants of the storm will reach southern Ontario and Quebec by Halloween, and "will result in a wet and windy week ahead for many Canadians," he said.

Similarities to film The Perfect Storm

In this case, Hurricane Sandy is being drawn inland toward the cold front by a trough of low pressure.

The Canadian Hurricane Centre said Friday that Sandy — which has killed at least 40 people — will lose some of its tropical storm characteristics early next week, but will remain a "large and powerful cyclone" as it heads for the East Coast of the U.S. It could prove worse than last year's Hurricane Irene.

"Sandy will quite likely impact parts of Eastern Canada early next week," the hurrican centre said in a statement. "The track and intensity will, as always, depend on many changing factors over a period of several days.  Thus, it is too early to meaningfully state how the storm will affect particular areas."

This could bring heavy rain and wind, pounding surf and widespread power outages to the U.S. northeast, he said.

Experts are predicting at least $1 billion in damage.

"It's looking like a very serious storm that could be historic," said Jeff Masters, meteorology director of the forecasting service Weather Underground.

"Mother Nature is not saying 'Trick or treat.' It's just going to give tricks."

For Canadians, the potential Frankenstorm means "Halloween could be bad for the kiddies" in areas from the Great Lakes to the Maritimes, Scotland said.

"We are looking at the remnants of this storm bringing wind, bringing rain, and bringing just messy weather in general to places as far west as the lower Great Lakes as we move Tuesday into Wednesday."