The people of Fort Severn First Nation are regaining the craft of canoe building that were integral to their community's history with a little help from southerners. 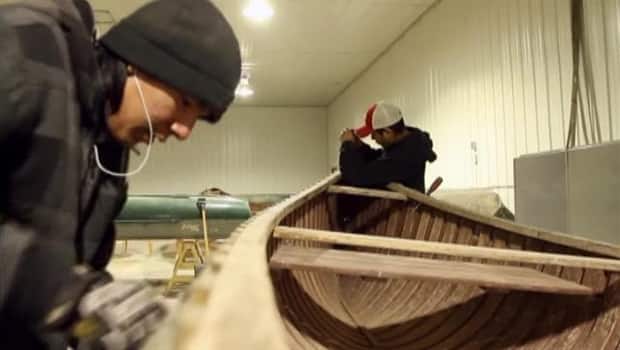 9 years agoVideo
6:02
CBC's Havard Gould visits Fort Severn First Nation in northern Ontario to find out how volunteers from southern Ontario and Manitoba have come together to help teach a new generation how to rebuild the canoes that are a central piece of the community's history. 6:02

It's a restoration project rich in symbolism. What could be more Canadian than saving a canoe, particularly a huge canoe steeped in history, one that carried generations across the rivers of Northern Ontario and waters of Hudson Bay.

Fort Severn First Nation, located on the shore of the Severn River upstream from Hudson Bay, is the northernmost community in Ontario. It was founded as a fur trading post in the late 1600s, and canoes have been an integral part of the community's subsequent history of hunting and trade.

But over the years, the isolated native community lost the skills needed to maintain its wooden canoes. The band recently decided to restore the craft that were so central to its history and teach the skills to a new generation. But the challenge was finding tens of thousands of dollars to fund the project, along with tools, material and restoration experts willing to spend weeks at a time working and teaching in the north.

The community teamed up with experts from southern Ontario and Manitoba in 2011, and work on the canoes started earlier this year. The team is planning to restore up to a dozen canoes — two have been finished, and they'll be re-launched when the ice is out of the river.

As a result of the project, young people in Fort Severn First Nation are learning skills that make them proud of their heritage and which could also lead to much-needed jobs.

CBC's Havard Gould traveled to Fort Severn in mid-April this year. Watch his video report at the top of this page to learn about the project and the impact it is having on both young and old in the community.