Vito Rizzuto, the erstwhile head of the Sicilian Mafia in Canada and once the most powerful figure in Montreal's underworld, arrived at a Toronto airport Friday night, hours after being released from a prison in Colorado. 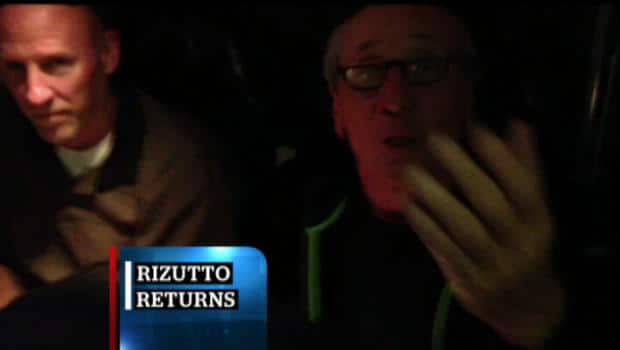 Return of the kingpin

8 years agoVideo
3:05
Former mafia kingpin Vito Rizzuto appears to have gone into hiding on his first full day back in Canada, disappearing after his arrival in Toronto Friday night. 3:05

Vito Rizzuto, the erstwhile head of the Sicilian Mafia in Canada and once the most powerful figure in Montreal's underworld, arrived at a Toronto airport Friday night, hours after being released from a Colorado prison.

His Air Canada flight departed around 8:22 p.m. ET and touched down at 10:41 p.m. at Pearson International Airport. Passengers on the flight from Denver reported a heavy police presence, with officers in full body armour inside the secure arrivals gate to greet Rizzuto.

A reporter from Radio-Canada was on the flight and captured exclusive video of Rizzuto. Rizzuto sat at the back of the plane surrounded by four agents and was the last to get off the aircraft.

Rizzuto had been released from the federal prison in Colorado around 9:30 a.m. ET and taken into custody by U.S. Immigration and Customs Enforcement agents, who deported him back to Canada.

Rizzuto completed his sentence Friday for his role in the 1981 murders of three renegade captains of the Bonanno crime family, one of New York's five big Sicilian Mafia clans.

He was arrested in Montreal in 2004 and extradited to the United States, then sentenced to 10 years after pleading guilty to racketeering charges in 2007 stemming from the crime. With credit for time served during his extradition process, Rizzuto was eligible for statutory early release this week.

The man once known as Montreal's Teflon Don, for his success at dodging the law, cannot stay in the U.S., because he is not a citizen.

While the Montreal Mob has grabbed more headlines in recent years, some crime experts and police believe the Toronto area's Mafiosi are more wealthy and powerful, if less prominent. Italian authorities say Ontario has become a base for the Calabrian Mafia, or 'Ndrangheta — particularly for money-laundering.

"It is 10 years since we told the Canadians to pay attention because 'Ndrangheta is very present in Canada, mostly in Toronto," Italian prosecutor Nicola Gratteri told Radio-Canada in a report earlier this week.

The landscape in Canada will be much different from when Rizzuto left. His son Nick Rizzuto Jr. was gunned down on a Montreal street in 2009. His father, Nicolo Rizzuto Sr., was assassinated in his home by a sniper the next year. His former consigliere is missing and presumed dead, and many of his associates are behind bars.

It has been suggested that the Canadian arm of the Calabrian Mafia — the very criminal organization that the Sicily-born Rizzuto once vanquished in his rise to power in Montreal — was behind the crimes as it exacted revenge and retook its old turf.

If so, the ex-don of Montreal could be walking into a hornet's nest by settling in the Ontario capital — though the move could also be part of a deliberate plot to avenge his family members' murders.

There's also the risk he could be re-arrested, if not immediately after crossing the border, then soon.

Italy issued an arrest warrant for him in 2005 on accusations he tried to use ill-gotten gains to land a role in the contract to build the Strait of Messina Bridge from Sicily to the mainland.

Another warrant stemming from raids carried out in Europe in 2007 tied Rizzuto to a vast financial empire. Police seized 22 companies and froze $690 million in assets, and sought the arrest of a number of Rizzuto associates from Montreal whose names and images have floated around Quebec's corruption inquiry over the last few weeks.

But Italy's Justice Ministry won't say whether it has requested Rizzuto's extradition to face charges. Italian officials had prepared an extradition request to the Americans a few years ago, but it was deemed inappropriate because Rizzuto was only in the U.S. due to Canada's agreement to extradite him there.

One thing is clear: with the Quebec corruption inquiry, known as the Charbonneau commission, in full swing, Rizzuto's name won't be far from the headlines.

Over the past two weeks, the commission has heard explosive testimony about how construction executives colluded to decide ahead of time who would win the bidding on public contracts and at what price — and how they would pay a 2.5 per cent cut of the proceeds to the Rizzuto clan.

RCMP surveillance videos played at the hearings showed some of those executives handing over stacks of cash to Rizzuto's since-slain dad. Wiretaps caught everything from threats over unpaid debts to mundane chatter about a gift for a retiring businessman.