Even if the province were to determine the activities of a private company accidentally ignited a wildfire that's destroyed forests and homes on the northeastern shore of Georgian Bay, there's no guarantee the company would have to pay for any damage or firefighting expenses.

Ontario is throwing a ton of resources at Parry Sound fire #33 that's burning out of control as it tracks east along the northeastern shore of Georgian Bay and threatens the CN rail line and Highway 69.

While emergency officials are focused on trying to protect Henvey Inlet First Nation, the Key River and French River Provincial Park, many residents and cottagers who have been forced to flee are beginning to contemplate the millions of dollars in damage and other costs — and who should pick up the bill.

"As of [Thursday] 90 fire rangers on the ground, six water bombers, eight helicopters, and that was just Day 7 or Day 8 of the fires," said Lisa Kivinen of the Key River Area Association, a community where numerous cottages have burned to the ground. 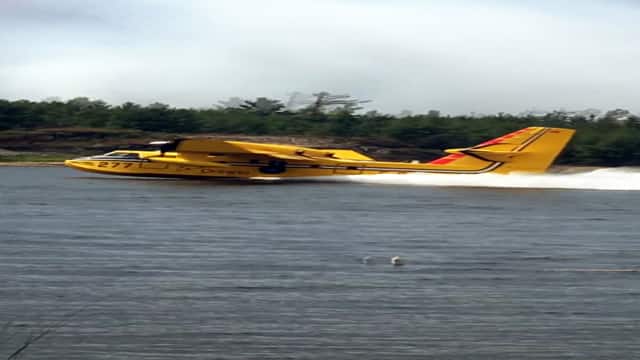 That's not to mention the cost of damaged or destroyed docks, boats, water systems, power systems, landscapes and businesses, she said.

Experts say nearly half of all wildfires are caused by people or industry, but governments seldom file lawsuits to recoup firefighting costs and damages.

This week, CBC News reported that workers at a wind farm construction site on Henvey Inlet First Nation believe the fire was started by an Argo all-terrain vehicle after it got stuck in the parched bush. Provincial investigators are looking into the claim, but even if they conclude a private company is at fault, recent history has shown recouping expenses is a legal long shot.

As far as Kivinen is concerned, whoever is ultimately found responsible should be held accountable.

"Those responsible should pay the bill," she said. "You know, if this fire was not caused by natural causes then accountability goes way up."

Finger pointing about what sparked the fire was fuelled by the Ontario government's own website, which initially pinpointed Henvey Inlet First Nation as the starting point of the fire and declared it was caused by "human" activity.

The Ministry of Natural Resources and Forestry (MNRF) has since removed mention of the cause "to avoid public speculation," a spokesperson told CBC News. The ministry has launched a more detailed investigation and says "the cause is unknown at this time."

In CBC's report earlier this week, workers at the Henvey Inlet wind farm site said they were under such intense deadline pressure to clear the land to make way for turbines that crews continued to blast rock despite extreme fire hazard conditions.

They said they managed to douse several fires sparked by the ongoing construction. But when the Argo got stuck in the bush late in the afternoon on July 18, flames spread and quickly got out of control, the workers said.

Pattern Energy Group LP and its affiliate Pattern Development, which are 50/50 partners with Henvey Inlet First Nation, have temporarily shut down the operation. They told CBC News that both the project and their general contractor, Quebec-based C.E.R. Construction, are insured.

"We have not seen any direct evidence of a link between this fire and our construction activities," Matt Dallas, media consultant for Pattern Development, wrote in an email Friday.

"We were operating within MNRF guidelines and protocols, and all of our contractors have a fire prevention plan integrated into their health and safety plans. The MNRF has stated the cause is not yet known and are conducting an investigation. We, like all neighbours to this fire, are anticipating the outcome."

Ontario has launched several negligence lawsuits over the years to try to get back millions of dollars spent fighting forest fires that the government believes were caused by industry. But with limited success.

CN denies it was negligent and disputes the government's claim that metal fragments from a passing train that were found in the bush had started the fire.

The case has been before the courts for four years and there has yet to be a trial.

After a major forest fire near the northern community of Chapleau in 1999, Ontario sued Canadian Pacific Railway for $3 million. The government alleged that a work crew burning piles of brush cut alongside the tracks had sparked the blaze.

CP disputed the government's conclusion, and after three weeks of what was expected to be a three-month trial, the Crown, facing problems with its case, settled out of court.

"I was flabbergasted," said Mike Flannigan, a professor of wildland fires at the University of Alberta, who acted as an expert witness for the Crown.

He says proving the exact cause of a fire in the bush — when there are few if any witnesses — can be next to impossible.

He said the government had satellite images showing the exact time and location where the fire started.

"It was right along the railway. You couldn't ask for more of a smoking gun. But they said, 'Well, how do you know?'"

While governments struggle to try to recoup millions from industry, they seldom seek compensation from individuals suspected of causing forest fires, Flannigan said.

"If they don't have the means to pay a multimillion-dollar bill, you know, you can't get blood from a stone."