From student debt to Indigenous reconciliation, here's what is driving young first-time voters to the polls

The youth vote was largely credited with deciding the 2015 federal election. Will that happen again? Here’s what a diverse group of first-time young voters thinks about the current federal election and how politicians are addressing the issues that matter to them.

The youth vote was largely credited with deciding the 2015 federal election - will that happen again?

"This is the time, being a first-time voter, to express what I believe is best for Canada going forward," says Sebastian Farkas, a student at Acadia University.

It's a common sentiment among people who tell CBC News they're voting for the first time in their lives in this election, but it's not clear how widespread that sentiment is among young people in general.

Historically, election turnout in Canada has been generally low among younger voters. However, that changed in the 2015 federal election when 58.3 per cent of the population from ages 18 to 24 cast ballots for the first time.

That was up from about 40 per cent in 2011, according to Elections Canada, which defines first-time voters as people between the ages of 18 and 24 who are casting their first ballot.

But there's a concern that this election isn't catching the attention of young people, and that the high turnout among first-time young voters in the 2015 election may be an anomaly rather than a trend.

"This election is different — there's a lack of hope, there's a lack of inspiration, and a lack of excitement," said Tyler Valiquette, deputy field director for Future Majority, a non-profit and non-partisan organization created by a group of young Canadians to increase youth voter turnout in Monday's federal election.

""Young people have a lot of issues they're deeply concerned about, and they're not really hearing parties talk about them in substance."

Last week, Future Majority deployed 300 canvassers at 21 college and university campuses across the country to help get information out to young people about what they need to do in order to vote, and where they can cast their ballots.

"What we're hearing is climate change is a huge issue," said Valiquette. "Also, cost of living is a huge thing, particularly in Ontario with the changes to the Ontario Student Assistance Plan (OSAP)." 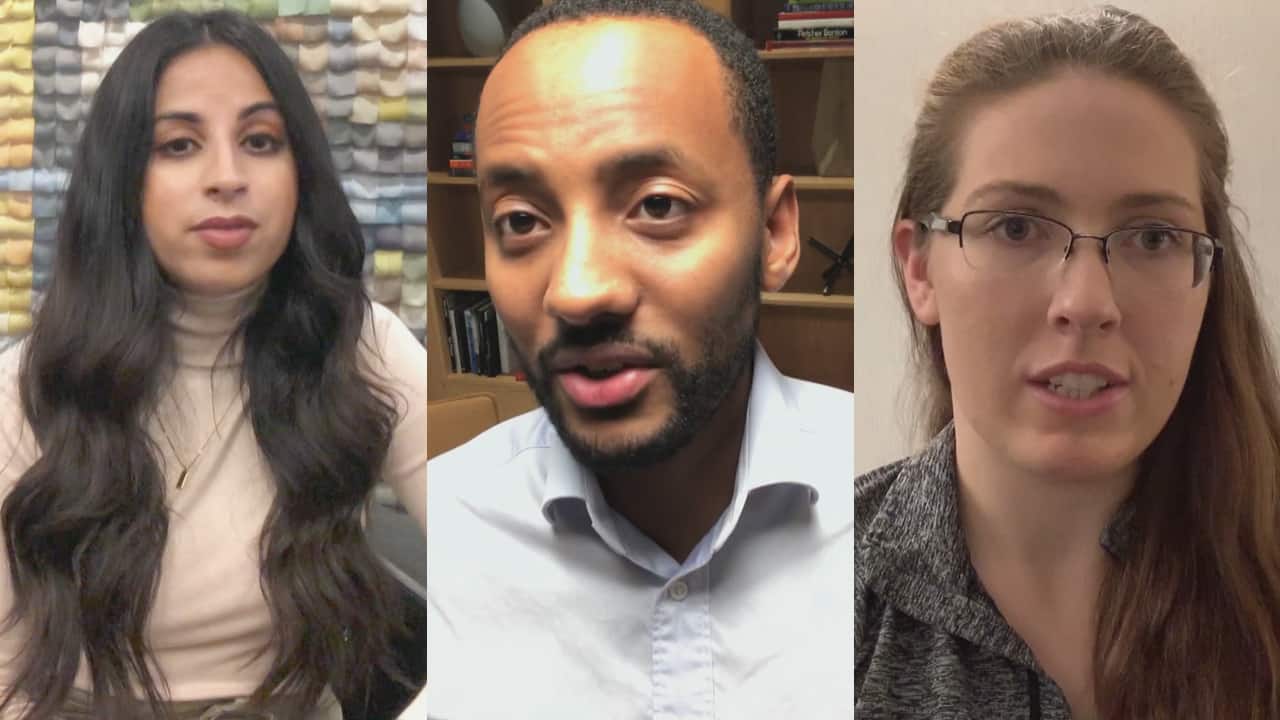 1 year ago
3:10
Millennials, including these six, make up the biggest voting bloc this time around. 3:10

As election day gets closer, Valiquette and his organization say they hope to speak with as many as 80,000 young Canadians, and walk 25,000 students directly to the polls.

"The majority of people who we're talking to are first-time voters, which is so important because research shows that if you vote at least once, you become a habitual voter," he said.

"We can tell politicians and demand from politicians to address the issues we care about if we come out and vote."

For those who intend to vote, what's driving them to the polls?

CBC News reached out to five first-time voters to learn why they plan to cast ballots in this election, the issues that matter to them, and their thoughts on how the election campaigns have unfolded. (Their responses have been edited for length and clarity.)

Why are you voting?: Most people take democracy for granted, so for me, [it's] realizing I'm so blessed to live in a democratic country and I should use that, in a sense.

What is a top election issue for you?: The one that really affects me would be housing. There's a very big housing crisis within Vancouver, and for me, as I'm growing up and going to be entering the workforce, it's trying to find housing that is affordable.

What are your thoughts on the campaign so far?: I really did like Trudeau at the very beginning. There's been so many different scandals and so many different things going on where [now] I feel like I don't trust him at all. I feel like he puts on this face to get votes. I would say that his words and his actions just don't add up for me.

Why are you voting?: I haven't really been all that impressed with the decisions by Justin Trudeau and I think that we need to have a little bit of a changeup in Ottawa. This is the time, being a first-time voter, to express what I believe is best for Canada going forward.

What is a top election issue for you?: The future prospects of the oilsands and Fort McMurray. My family is from Calgary — they've been reliant on the oil and gas industry my whole life. I wouldn't be able to have the opportunities I have right now without it.

What are your thoughts on the campaign so far?: I'm just not really impressed with any of the leaders, to be quite frank. I think that they're not the types of prime ministerial candidates that I think people look to as beacons of light and hope for something better.

Why are you voting?: It's really disheartening to me that the government seems to be confusing [Indigenous] reconciliation with their legal responsibilities. Because I think reconciliation is what's supposed to come after the government does what they're supposed to do, but they're trying to pass off their legal responsibilities.

What is a top election issue for you?: I would definitely say the boil-water advisories that are across the country. These are human people who, for decades, have had to boil their water to shower, to drink, to cook with. Water is a human right and this is Canada, and we're not giving our people clean drinking water? It makes no sense.

What are your thoughts on the campaign so far?: I think the whole campaign season is just highly pathetic, it seems super childish. I think campaign season is supposed to be more about bringing up those issues that you want to fix instead of attacking anyone any chance you get.

Why are you voting?: A lot of people around the world don't even have the right to vote, so seeing how other people still don't have that opportunity, I really want to make sure I'm able to exercise my right. During federal elections, you think that your opinion is so small or it doesn't really matter, but it does. Everyone should definitely be voting.

What is a top election issue for you?: Personally, just because I'm a student, I would say student debt is a big one. I think one of the core issues is, it's not about how much time [the government] would give us, but it's more about people just can't pay it back because it's really hard to get a job in this landscape.

What are your thoughts on the campaign so far?: It's been entertaining, I would say. For the English debate, it was extremely hard to listen to [the leaders] because they were debating a lot, arguing. It just doesn't seem polished.

Why are you voting?: When you don't vote, you feel less involved in the conversation. Even though a single vote doesn't seem like a big thing, if you just vote, your brain will feel entitled to complain.

What is a top election issue for you?: I think education is really important. I was looking at all the platforms, and everybody says pretty much the same thing — except, of course, Maxime Bernier, but that's another story.

What are your thoughts on the campaign so far?: I think I'm getting a little cynical. When the leaders get attacked on various small things, and sometimes we dig up things from their past, those are the things that distract all the population.

Alvin Yu splits his time along the 401 corridor as a reporter for CBC London, and associate producer for CBC Toronto and The National. Yu set his sights on journalism early - as a kid he would anchor the news in the shower, hoping one day to make it to the big screen.