Television reporters across the country, including many CBC journalists, have been dealing with the vulgar FHRITP phenomenon — in which mostly female television reporters are disrupted during a live taping by someone shouting "f--k her right in the p---y."

After CityNews reporter Shauna Hunt confronted her FHRITP harassers this week during a live taping, the video went viral, prompting backlash against the pranksters as well as widespread debate.

One man was fired from his job in connection with the incident and Ontario Ombudsman André Marin is expected to weigh in. The trend is based on a U.S. newscast incident that was later revealed to be a hoax.

But for months now, television reporters across the country, including many CBC journalists, have been dealing with the vulgar phenomenon — in which someone shouts "f--k her right in the p---y" into a microphone or camera during a live taping.

Here, the reporters share some of those experiences in their own words.

CBC Toronto television reporter Shannon Martin told Metro Morning host Matt Galloway that while filming a television segment outside a high school half a dozen different groups shouted FHRITP at her within a few minutes of her arrival. 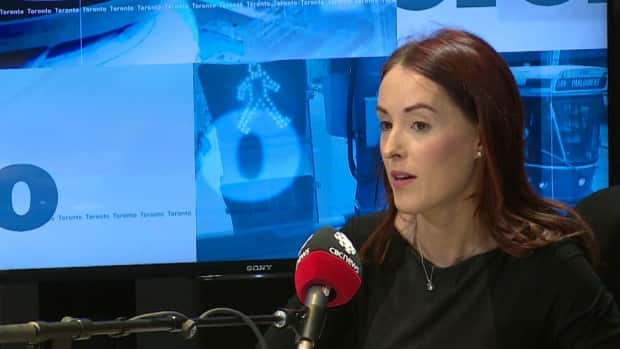 6 years ago
6:03
CBC Toronto reporter Shannon Martin speaks with Matt Galloway about encountering the vulgar comment while shooting a story 6:03

"This is something we constantly face, though. I would say once a week," she said. "It makes me want to curl up in myself. It's mortifying."

Martin later wrote a letter to the high school's administration and shared a video of the students harassing her, and she said the school informed the students' parents of their behaviour. The students were "trying to get a laugh from their buddies," but not thinking about what the words mean, she said.

"Although I'm on the street corner with a camera, so I am in the public sphere, it's still my workplace. You wouldn't yell that at a bus driver, at a bank teller or anybody else in a workplace."

Standing in large crowds where she might face FHRITP taunts can be "very uncomfortable," she said.

Videographer Sara Calnek said she was subjected to taunts while interviewing people at a downtown homeless shelter about two high-profile homicides last month.

"A truckload of guys drove by and yelled it in behind our interview," she said.

"We just all stopped and didn't know what to say. It's like we lost our breath. It was so degrading and insensitive."

Another videographer, Holly Caruk, said taunts were hurled her way as she interviewed a father with two small children. In another case, she was talking to students who had organized a fundraiser at a high school.

"Everybody laughed … it felt embarrassing and off-putting," Caruk said.

"This was something that felt very targeted to me as a woman and very threatening."

6 years ago
4:04
At least 11 CBC Manitoba staff have been targeted by the same type of vulgar heckling that got an Ontario man fired from his job this week. 4:04

Saskatchewan reporter Tory Gillis said the crude shouts have happened to her and her colleagues in towns and cities across the province.

​"Here in Saskatchewan, you can expect to freeze a little bit when you need to show and tell people just how dangerously cold it is on the Prairies. I can take that any day of the week — and I do, often," Gillis wrote this week.

"But when people yell something vulgar, misogynistic and rude at me or into my microphone, I shouldn't need to tell them it is unacceptable."

Journalist Meghan Grant said that while covering a story about a movement to end sexual harassment among hockey fans, "two not-so-classy gentlemen pulled up behind me, screamed FHRITP and drove away." 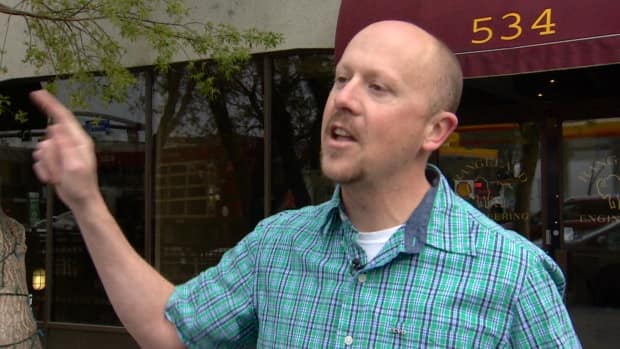 6 years ago
0:33
CBC reporter Meghan Grant shares her experience after being the target of a worrying online phenomenon known as FHRITP. 0:33

"FHRITP — or f--k her right in the p---y — is a phrase men scream at (for the most part) female reporters. It's rude, it's degrading and it's harassment," Grant wrote.

"I could make a compilation of this obscenity," he tweeted in French.

Other male CBC producers and reporters say they have experienced the FHRITP phenomenon as well.

CBC Montreal journalists Morgan Dunlop and Tanya Birkbeck have opened up about the experience.

"You are not advancing an organic movement. You are copying what one guy set up as a spoof. We can see your face and hear your voice and so can your girlfriend, your sister, your mother, your daughter," Dunlop wrote. 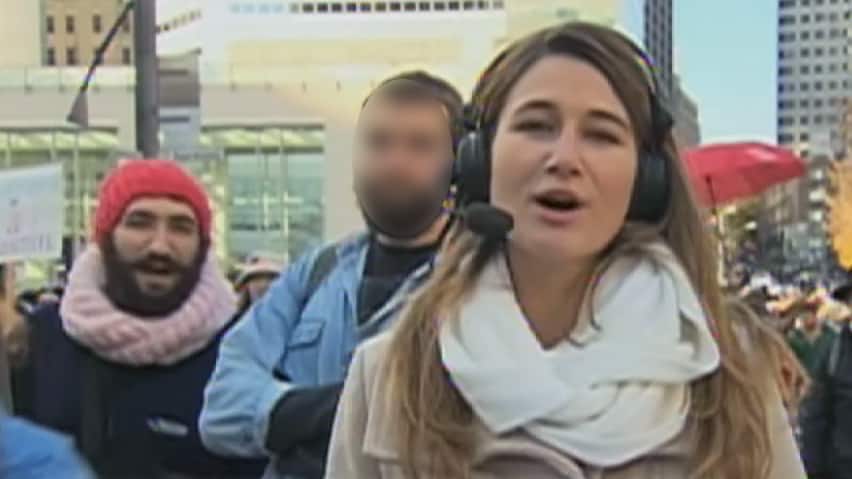 When a young man first shouted the FHRITP phrase into her microphone, Tanya Birkbeck thought it was an isolated incident. Until it happened three times in one day. 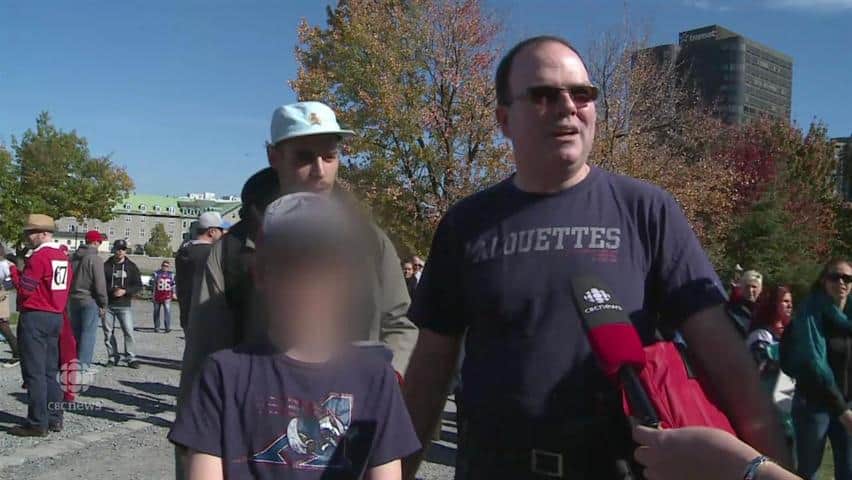 6 years ago
0:49
CBC Montreal reporter Tanya Birkbeck had the phrase yelled at her twice in the same day. 0:49

"For people who are aware of the internet phenomenon, it might have seemed like a rude joke. But I hadn't seen the videos online, so I felt shocked and violated by the words. It felt personal. Not just a catchphrase, but more of a taunt suggesting that the men around me, instead of talking to me, should be, you know, raping me," Birkbeck wrote.

"My reaction was visceral. People around me stopped and stared. I felt totally exposed." 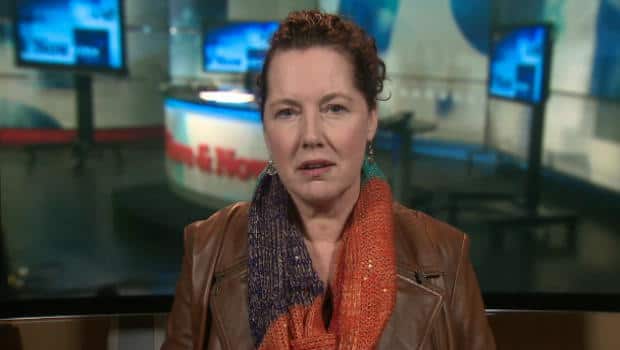 6 years ago
7:07
CBC journalist writes an online rant that hits a nerve and is being shared around the world 7:07

To be catcalled that way while reporting was "very unnerving, very unsettling and quite frightening, actually," she told CBC News Now host Carole McNeil.

​She was shooting a stand-up last year when a young man shouted FHRITP from his car.

"The experience made me sick, and then it made me angry," O'Neill-Yates said in a blog post last fall.

"It's not funny. It's offensive, degrading and sick. But every time we allow an act of violence to go unchecked we are enabling the abusers.

"So for the first time in my life, I'm speaking out publicly about violence against women. I'd like all my colleagues to know about it and to keep their guard up. I'm just saddened that in 2014 we need to be having this conversation." 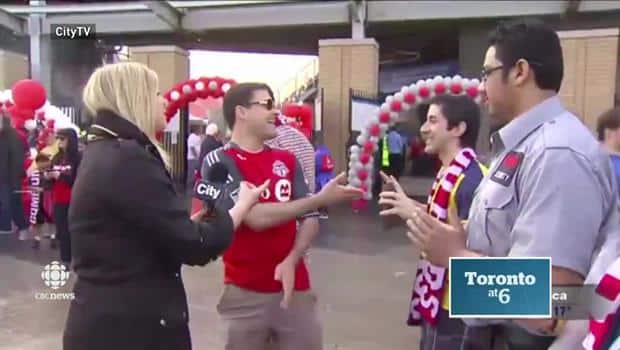 6 years ago
3:37
A Toronto news reporter's decision to call out a group of men for making a rude remark behind her on live TV has quickly become a major news story 3:37
CBC's Journalistic Standards and Practices|About CBC News