Cost of living is a big election issue according to a CBC News-commissioned poll, and housing is the biggest single expense for most Canadians. As the campaign has unfolded, the federal parties have begun to unveil plans on how they'd make life more affordable for voters.

Jeff Gallant lived in his new home just 17 days before the For Sale sign went up.

Soon after the single dad rented the house, it was sold and the new owners sent him notice of a major renovation that would force Gallant and his two young children to leave. A similar thing occurred at his previous place, and it's happening to so many renters in Charlottetown that a new term has been born: Renoviction.

Charlottetown is a prime example of the scarce vacancies and spiraling costs facing renters in communities across the country.

"It's getting ridiculous," Gallant says of the rental market. "Prices have doubled pretty much, and that boils back to supply and demand. They know there's nothing here, [so landlords] jack up the price."

Cost of living is a big election issue, a CBC News-commissioned online poll from June suggests, and housing is the biggest single expense for most Canadians, according to Statistics Canada figures on annual household spending.

As the campaign has unfolded, the federal parties have begun to unveil plans on how they'd make life more affordable for voters.

The Liberals aim to build 100,000 affordable housing units over a decade. They would also encourage home ownership through a first-time home-buyer incentive that subsidizes up to 10 per cent of the purchase of a new home and five per cent on resale homes — with restrictions.

The NDP have a more ambitious plan, committing to build 500,000 affordable housing units in a decade.

A central message of the Conservative campaign is that it wants people "to get ahead, not just get by," and that the government needs to get its hand out of Canadians' pockets in areas like the carbon tax, which the party describes as ineffective. The Conservatives have promised to ease building regulations to increase the housing supply, and said Monday that if elected the party would change the maximum mortgage term, increasing it from 25 years to allow up to 30-year mortgages. It is also promising to review the "stress test" for first-time buyers applying for a mortgage.

The reality is that finding affordable housing is increasingly difficult in many parts of Canada.

The smallest provincial capital, Charlottetown, has one of the lowest rental vacancy rates in the country. It hovers just above zero per cent, new Kijiji listings last just minutes before apartments are snapped up, and renters complain about spending ever more of their limited dollars on housing.

The numbers get only marginally better when income levels increase. 1 year ago
0:34
CBC's David Common asks the mayor of Charlottetown, Philip Brown, what he thinks needs to be done to fix the severe housing shortage in the city. 0:34

Data gathered by the Canadian Rental Housing Index shows that Toronto renters earning as much as $45,498 a year are dedicating 40 per cent of their earnings to monthly housing costs. Live outside the downtown core, in York or Peel region, and those middle income earners are paying an average of per cent 44 and 38 per cent respectively.

In Regina, low-income renters spend more than half their pre-tax earnings on rent and utilities. In Calgary it's 62 per cent, and 91 per cent in Vancouver.

This may help to explain why so many adult children are returning to live with their parents even after they've entered the workforce, or why many young adults choose to have roommates to defray living costs.

Across Canada, it's not simply a question of how much accommodation costs, but also about keeping up with the need for more places to live.

In 2018, there were 37,000 new apartments built nationwide, but demand increased by 50,000 units, according to tracking done by the Canada Mortgage and Housing Corporation.

And Canadian cities continue to grow, driven by factors such as immigration and stronger job numbers.

With housing-related problems rising and the cost of living a primary issue for Canadian voters, Charlottetown Mayor Philip Brown figures political party leaders in the midst of a federal election campaign should be talking more about it. When he was elected last year, he describes how he used a congratulatory phone call from the Prime Minister to drive home his top priority.

Each community has its own housing challenges, and one of the big ones for Charlottetown is that short-term rentals for the city's giant tourism industry suck up a lot of housing stock.

Another is house prices — Canadian Real Estate Association (CREA) data shows they've jumped 38.5 per cent in the past three years alone in P.E.I.'s capital. By comparison, prices rose 25.3 per cent in Toronto, 21.6 in Ottawa and 33.3 in Victoria. A market where buyers get into bidding wars is new for Canada's smallest province, which recently surpassed 153,000 residents, and it's persuading some landlords to sell.

Added to that, the province's population is growing, with people moving to P.E.I. from other nations and parts of Canada on both a permanent and temporary basis. The University of P.E.I. hasn't built a new residence in 14 years, for example, while its student population has increased by about a third. There have been significant increases in the number of students on campus requiring housing, with half now coming from out of province or out of country.

"And that, in turn, is pushing more demand on downtown housing," Brown explains.

Holland College student Sierra Elkerton was debating whether she could even afford to stay in school after she was evicted by her landlord because the building was not up to code. She managed to find a new apartment, but for nearly double the monthly rent.

"Realistically I don't want to pay that, but it looks like I'm going to have to," says Elkerton. "The cost of living is way too high considering it's such a small city."

She's not alone. A global survey by money manager BlackRock Inc. found "many Canadians feel that they are in a financial squeeze — hard pressed to save amid what they perceive as a high cost of living, including devoting much of their income to paying for their homes."

Canadians who responded to the poll said they spend an average of 43 per cent of their income on housing — whether renting or owning.

Among the 20 countries surveyed, only the Netherlands and Sweden had higher housing costs, at 51 per cent and 45 per cent respectively.

Charlottetown's mayor is well aware of the numbers. In his community, he's most focused on trying to help the people who find themselves paying more than they can afford — and those who can't find anything at all.

The mayor says he would like to hear commitments from party leaders this election cycle to use the big federal wallet to help cities build more affordable housing.

"I got two calls this past week and one visit to the office," Brown says. "From a woman who was living in her car in the Walmart parking lot, and another woman that's been in [a shelter] now for almost a month and she needs a place to live."

Watch The National's story about what it's like to live in a 'severely unaffordable' Canadian city: 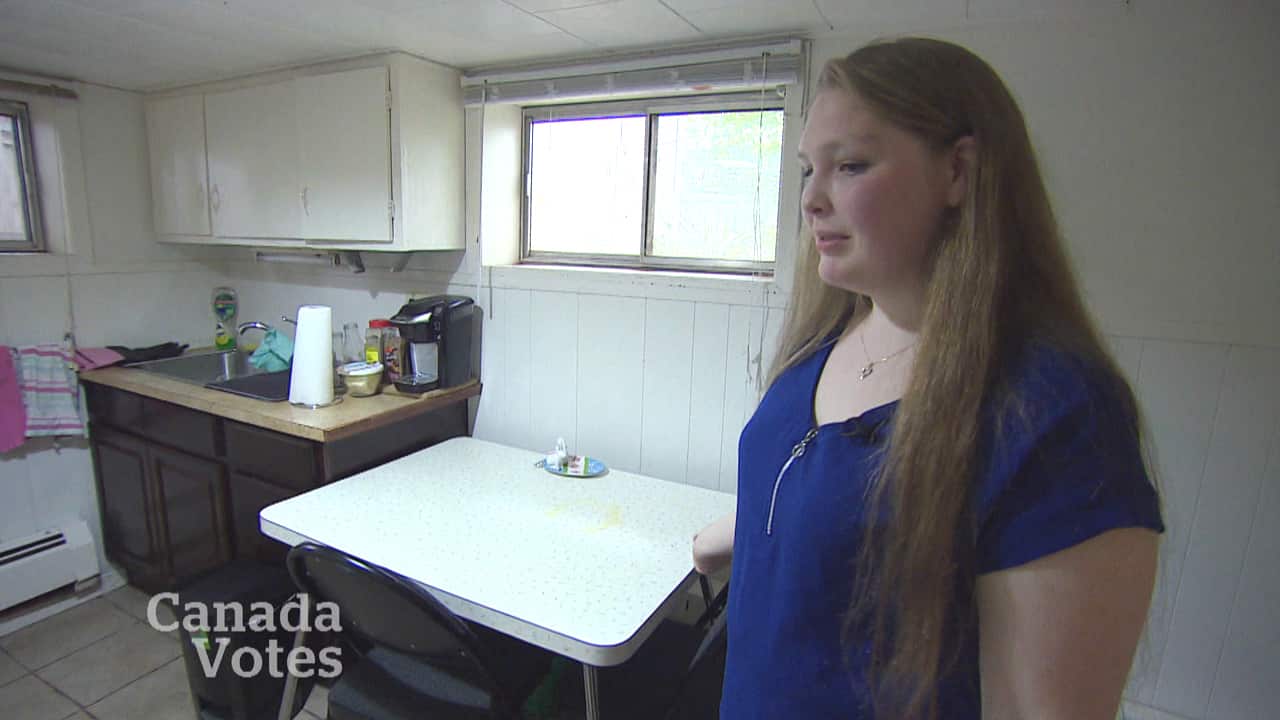 What it’s like living in a 'severely unaffordable' Canadian city

1 year ago
4:54
It's not just difficult for Canadians to buy a home. Rent is also becoming more and more unaffordable. 4:54
CBC's Journalistic Standards and Practices|About CBC News