Some newcomer advocates in Red Deer are warning that yellow vest protests are stirring up anti-immigrant sentiment in the central Alberta city.

Demonstrations happen on Saturdays one block from a centre for newcomers

Some newcomer advocates in Red Deer, Alta., are warning that yellow vest protests are stirring up anti-immigrant sentiment.

Since November, protesters wearing yellow vests have packed the downtown on Saturdays to call for pipelines and stricter rules on immigration while denouncing the carbon tax and the United Nations migration pact.

Posters have circulated at the protests, claiming Prime Minister Justin Trudeau's agenda supports terrorism, "mass Muslim immigration" and starting the "process of Sharia law." The rally has attracted members of the Soldiers of Odin, an anti-immigrant group.

"It seems like there might be some confusion within the [yellow vest] group, that some of them are really just in support of the pipeline and economic stimulus," said Deirdre Ashenhurst, co-chair of Red Deer's Welcoming and Inclusive Communities Network.

"But when you drive past and see the signs that say anti-immigrants and immigrants are taking our jobs, that's a racist issue.

"There are a lot of people who are afraid to come downtown during that time." 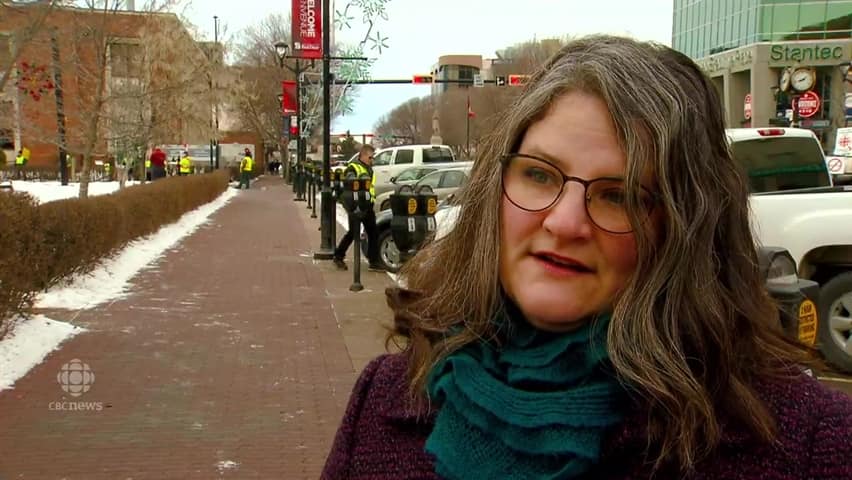 One block away from where the rallies are held, Central Alberta Refugee Effort Committee (CARE) offers services to newcomers. They have English classes scheduled on Saturdays while the protests are on.

CARE executive director Frank Bauer said all people have a right to share opinions that are not hate-driven, but he's troubled by the spread of false information.

"Some people have to flee their country because they're not safe, and we as a country, in general, we should be able to welcome these people and give them a safe place," said Bauer, who immigrated from the Netherlands a decade ago.

"We need immigrants to keep our working population up. So those same people that are shouting anti-immigrant slogans, if they want to keep their Canada Pension Plan, they will need younger people to fill the jobs."

Of the 1,500 newcomers who arrive in Red Deer each year, many are supported by CARE. The building's front entrance was locked on a recent Saturday as recent newcomers arrived for class.

On Nov. 19, someone put a Soldiers of Odin sticker on the front window of the building. The incident was reported to RCMP. Bauer noted it was around the same time the Calgary-based anti-immigration group National Citizens Alliance organized a public event in Red Deer.

Less than a month later, on Dec. 11, a female student's vehicle was shot at with an air gun. RCMP haven't found evidence of a hate crime but they have not identified suspects either. A constable later provided a safety presentation to students.

Yellow vest protesters insist that criticism about Islam, and their stance on immigration, don't make them racist. Several people interviewed by CBC acknowledged their own immigrant roots.

"I get called a racist all the time but that's on Facebook by people who don't know me," said protester Maureen Zelmer, a medic in the oilpatch who lives in Calgary.

'We want our immigration, we want them vetted, properly vetted. We want them to come into our country and keep our country safe. We've got no problem with immigration whatsoever, just through the normal channels."

Russ Mashford said he's worried "Canadian values and morals" are being undermined by the policies of the Liberal government.

Coun. Ken Johnston said city council supports the yellow vest movement on the issue of energy and pipelines but there is no room for intolerance.

"It is not the face of Red Deer," Johnston said. "I think our newcomers to Red Deer and I think our Red Deer citizens understand that we are a welcoming community. We're an inclusive community. We value diversity."