Premier Notley and company executives look ahead to oilsands restarts

Energy company executives met Tuesday with Premier Rachel Notley to discuss targets and plans to get oilsands facilities running again in the wake of the wildfire that has devastated Fort McMurray.

Williams and the senior executives of 13 other resource companies met with Alberta Premier Rachel Notley at the Alberta Legislature to discuss the effect of the Fort McMurray fire on their operations and when they would be able to resume production.

Williams said no damage was sustained to facilities north of the city, so it should be easier to get them back online soon.

"It's important to do that to get back into the rhythm and to start to support the economy," he said.

Some facilities were able to keep operating throughout the fire. Shell Albian Sands was able to resume production Monday.

Nexen Long Lake and Hangingstone, south of Fort McMurray, are believed to be undamaged, but fire has prevented anyone from inspecting the facilities. Hangingstone is still under threat from the fire.

Williams said there was no significant damage to pipeline infrastructure, which is underground. Repairs to the electrical system are underway but are not considered to be an impediment to resuming production.

The fire had an impact on production of about one million barrels of oil a day.

The Suncor CEO said oilsands companies have shown they can move huge numbers of people quickly, so they can get staff back to work. He said people are eager to return to their jobs.

"There's a great spirit of trying to make the economic impact as small as possible."

There are no plans to lay off staff. Williams said most companies have continued to pay their employees throughout the crisis.

Notley said the employees will be living in camps north of Fort McMurray, not in the city itself, which remains under a mandatory evacuation order. Highway 63 reopened Tuesday to transport goods and equipment for resuming oil production.

"The plan that was discussed today was about [employees] being staged from camps and being independently supported from the camps that were unaffected," she said.

CEO Mark Ward of Syncrude Canada and Steve Laut, president of Canadian Natural Resources Ltd., were also among the executives who attended the meeting in Edmonton to discuss how to get the oilsands industry back on track following the evacuation of 80,000 people from the city.

Warren Mabee, director of the Institute for Energy and Environmental Policy at Queen's University, said he thinks the companies will be anxious to see people allowed back into Fort McMurray as soon as possible because a stable workforce is critical to their operations. 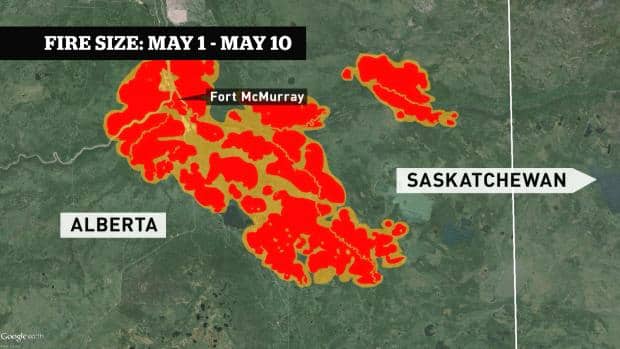 How does the Fort McMurray wildfire's area compare across Canada

4 years ago
0:49
See how the size of a fire some called ‘the beast’ compares to the size of Canadian cities 0:49

"I would be looking for a better update on what's happening on the ground," he said.

"The oilsands can continue to operate — as we said, they haven't really lost a lot of their critical infrastructure — but what they have lost, right now, is the support mechanism that the whole city represented and that is significant.

"Without that, their costs go through the roof. It's essential to those companies that the city gets up and running even if all the neighbourhoods aren't inhabited, even if all of it isn't back where it was."

Mabee said an extended period of downtime due to infrastructure or staffing issues could lead to the industry requesting financial help through bailouts or tax incentives.

Asked about the issue on Monday, Notley said the main issue is ensuring the safety of the employees and that there is logistical support for them.

"That and other issues will be discussed with the key leaders [in the oilpatch] but we're hopeful that we will be able to move in a relatively expedited way," she said.

Rob Bedin, a 30-year engineer and director at Calgary-based consultancy RS Energy Group, said he doesn't think the industry will ask for money, but agreed that staffing is one of the biggest questions it is facing before the production of an estimated one million barrels per day of raw and upgraded bitumen can resume.

"The fact that it was an organized shutdown, that's positive in regards to the speed at which it will come back," Bedin said.

One concern for the sector is water quality. Oilsands mines that draw water from the Athabasca River or have open storage ponds could be exposed to ash contamination.

Bedin said producers who have been able to keep their water heating systems warm will have an easier time getting their plants running again.

Jackie Forrest, vice-president of energy research at ARC Financial in Calgary, pointed out the oil sector was back in business within two weeks after wildfires that had closed thermal operations south of Fort McMurray were extinguished last spring.

"Although this is much more serious, once the fires were out, the operators were in there fairly quickly and getting their production back on line," she said. "Assuming there's no damage to the actual facilities, that will happen quite quickly."

Imperial Oil Ltd. said Monday that it had shut down its Kearl operations due to the uncertainty of the situation. Imperial said the plant and other assets were unaffected by fire, and there was no firm timeline for operations to resume.

Earlier Monday, the Canadian subsidiary of Norwegian energy giant Statoil ASA said it had closed its Leismer demonstration oil project, which had been producing about 20,000 barrels of bitumen a day.

It was shut down after the precautionary closure of an Enbridge pipeline that supplies light oil to the Leismer site, Statoil ASA said.