Work has started on a covered soccer complex believed to be the largest of its kind in the country in Edmonton.

Construction has started in south Edmonton on a multi-million dollar, state-of-the-art soccer complex.

Known as the Edmonton Soccer Dome, the $7-million air-supported structure will boast the first full-size indoor field for soccer in the city.

"This will be the biggest sports dome in all of Canada and it's a great addition to Edmonton," said Antony Bent, the facility's general manager. "This really is going to be a megaproject."

Scottish society members have been dreaming of an indoor facility for several years because of a crunch in finding indoor playing time in winter.

"Facility space and the times at which facilities are available quite often are after 9 p.m. and 10 p.m., and that's tough for young families," said Kevin Poissant, technical director of the Edmonton Scottish United soccer club.

Poissant said earlier plans for a traditional-style building were too costly but the idea of an air-supported structure brought the dream within reach.

He likens the dome to a giant air balloon with the covering fabric held up by blowing air and held in place by cabling. 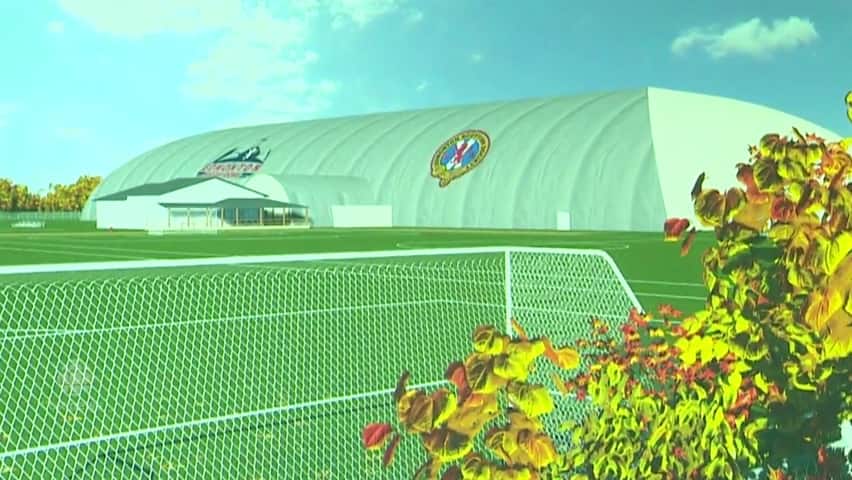 3 years ago
1:15
A construction crew recently broke ground for what will be Canada's largest indoor soccer dome. The United Scottish Soccer Club's Kevin Poissant talks about what the air-supported structure will mean for Edmonton soccer enthusiasts. 1:15

There's already been interest in the space from a number of leagues and clubs that have sometimes played in gymnasiums because of the lack of available indoor space, he said.

Poissant believes the new centre, which is also being kitted out with high-tech indoor turf at a cost of $1 million, will be a huge boost for the development of players in the city.

"If we're in a gymnasium space or a smaller artificial turf space, players can't work on simple things like longer ball striking. If you're in a gymnasium, the longest you can strike a ball might be 12 to 15 yards," said Poissant.

The Scottish society said it has received $2.9 million in grants from the City of Edmonton for its project and the rest is being financed through a bank loan.

But the society is confident of making money. The design allows for the full-size field to split into four mini fields to allow for several smaller games to be played at the same time.

The plans also include a two-lane running track around the pitch.

Rugby, lacrosse and Ultimate — the team sport played with a flying disc — could make the facility work for them, Poissant noted.

Construction started Oct. 19 after a development permit was approved by the city.

The hope is to have the facility up and running and ready for kickoff early in 2018.