A fish and wildlife officer in northern Alberta resorted to extraordinary measures to separate two deer after their antlers became intertwined during the pre-rutting season.

It's unclear how long the animals had been locked together 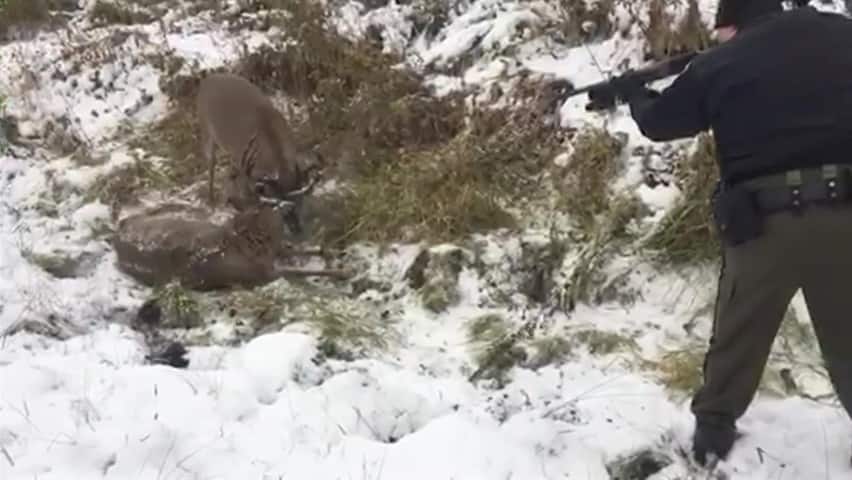 2 years agoVideo
0:33
Greg Gilbertson took this video of an Alberta Fish and Wildlife officer shooting off the antlers of one deer to free it from being tangled with another deer. 0:33

With a well-aimed slug from a shotgun, an Alberta Fish and Wildlife officer managed to save a struggling deer's life.

The animal's antlers had become intertwined with another white-tailed deer during pre-rutting season in northern Alberta. The pair were tussling in a snow-covered field, unable to unlock their hard, inflexible barbs.

A landowner near Whitecourt called the provincial department on Oct. 10 after he spotted the animals in his field.

"They fight by putting their antlers together, and whoever is bigger and stronger tends to win."

In this case, the deer were stuck.

Little weighed his options. He could tranquillize the animals and work to separate them, but the drugs make it hard for immobilized animals to regulate their body temperatures, which would have been risky since the temperatures were already below zero.

Another option would have been to saw through the entangled antlers.

"Sometimes when both animals are super tired and not as lively, you can ... get up there with a saw, and saw the antler off and free them that way," Little said.

"But obviously that's something every person would have to make their own discretionary judgment on. If the deer is lively and proceeds to jump up and kick, you can get injured yourself."

Sometimes when both animals are super tired and not as lively, you can ... get up there with a saw, and saw the antler off and free them.- Mike Little, fish and wildlife officer

With the field empty, Little decided the least intrusive way to separate the animals would be to use a shotgun to shoot through the antlers, using an ounce-and-a-quarter slug.

"We have policies that dictate when we can and cannot use firearms. Public safety is our No. 1 concern always, along with officer safety and what's best for the animal. The location provided a safe area to discharge a firearm, with a berm in the back stop."

In a video shot by landowner Greg Gilbertson, a retired fish and wildlife officer himself, the two animals are seen struggling in the snow. Little's second shot snapped an antler and separated the animals immediately.

One deer had already suffered a broken neck in the battle with the other animal and had to be euthanized. The other deer ran off toward the treeline.

Images of the one-antlered deer have since been captured on a trail camera in the area.

"When I'm able to see one deer run away, that potentially could have succumbed to exhaustion and passed away itself, it feels good," Little said.

"Especially knowing a member of the public was able to provide photos later on of the deer up and about, living his normal life. So I guess it's good to say we saved at least one."

Little said it's all but impossible to say how often deer become locked together by their antlers.