There are over 70 animals at the makeshift shelter in Lac La Biche, Alta., easing the minds of pet owners displaced by the Fort McMurray-area wildfires. 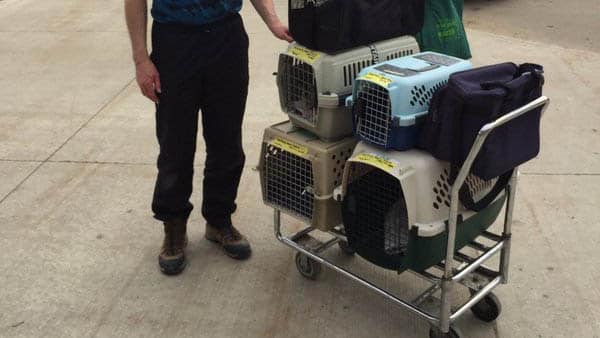 Pets get help in evacuation centre

5 years agoVideo
3:17
CBC reporter Erin Collins gives us a tour of the evacuation centre in Lac La Biche, where hundreds of people and their pets have fled the Fort McMurray fire 3:17

Inside the evacuation centre in Lac La Biche, Alta., there is a shelter within a shelter. Just a short flight of stairs up from the arena where hundreds of people are sleeping, you will find a very different shelter where kennels have replaced cots.

Vicki Stafford is in charge here.

Stafford is with Animal Control in the nearby town of Athabasca but for now she is tasked with making dozens of animals, who were evacuated from Fort McMurray, comfortable.

"We are caring for about 70 animals, that is between cats dogs and exotic animals even chickens. We had three chickens."

Stafford says the evacuees are relieved to find there is a designated place for their animals to rest and relax. It is certainly how Tracy Galloway felt when she arrived with her two Golden Retrievers, Bella and Misty.

"When I signed in up there I said to them, 'it is like you have done this before, this is unbelievable.'"

Galloway, who works in Fort McMurray and lives in nearby Anzac, has already been evacuated twice. She says she isn't sure if her house will survive the wildfire but is happy knowing that her family, including Bella and Misty, are safe.

"They are our family too, I mean come on, one is 10 and the other is 14, I have two boys and these are my two girls to balance out the testosterone in the house."

The hallway outside this make-shift animal shelter is stacked high with dog and cat food, all donated by local families and businesses. A team of cleaners works around the clock to keep the kennels clean and the animals walked.

Tom Noseworthy and his two dogs Maggie and Molly wound up at the shelter after making the dash from Fort McMurray to Lac La Biche on Tuesday night, a trip he says was hard on him and his dogs.

"They were starting to get stressed out quite a bit when we were on airport road in Fort McMurray when the fire was getting close and we couldn't go nowhere and were stopped there for about two-and-a-half hours stuck there in traffic."

Noseworthy noticed the care and efficiency of people running the shelter as soon as he arrived.

"It is really good for the amount of dogs and animals that they got coming in upstairs and they have a lot of volunteers up there helping."

Noseworthy has since found a hotel in town that will take pets but he isn't sure how long he will be there. He thinks it could be three weeks or more before he and his animals can return home to Fort McMurray.

In the meantime Vicki Stafford says she will be there for all of the four legged evacuees who come her way for as long as they need her.

Some flights evacuating people from the area welcomed pets on board to fly with their families.

Photos taken on a Canadian North Airlines flight show dogs resting at the feet of passengers in the main cabin area as they are flown out of Fort McMurray.