Wildcat strike at Alberta hospitals ordered to end by labour board

Hundreds of Alberta health care workers who walked off the job Monday are being told to stop "illegal strike activity" and return to work, the province's labour board says.

Hundreds of Alberta health care workers who walked off the job Monday are being told to stop "illegal strike activity" and return to work, the province's labour board says.

The Alberta Labour Relations Board issued a decision around 9 p.m. following an application from Alberta Health Services. It calls on employees engaged in a wildcat strike to cease and desist.

The directives will be filed with the Court of Queen's Bench and are set to become enforceable by court order.

Finance Minister Travis Toews issued a statement saying he was pleased with the decision and expected union leaders to ensure it is followed.

"Going forward we expect that all unions respect the bargaining process and stop putting Albertans' safety at risk," he said. "We will not tolerate illegal strike activity."

The Alberta Union of Provincial Employees, which represents the workers, said  its members would return to work Tuesday.

The union said it would notify its members of their obligation to obey the labour board's directive.

"AUPE members won support from across Alberta for their heroic stand, and proved once and for all that health-care staff is more than doctors and nurses," said the union's statement Monday night.

Alberta Health Services enacted contingency plans to deal with staffing shortages after support workers walked off the job at several hospitals in Edmonton, Calgary and other municipalities.

Most of the workers involved in the wildcat strike were general support service staff whose jobs are at risk of being outsourced by the provincial government to private companies.

Toews said earlier Monday the strikes have put the health and wellbeing of patients at risk and warned the workers involved "will be held accountable."

He told reporters the strike action is irresponsible, especially given the mounting pressures placed on the health care system amid the pandemic.

"I believe that the union leadership that prompted this illegal action at a time when our health care system is already challenged, need to be held to account," Toews said.

'There will be no layoffs'

The province takes no responsibility for the strike actions, he said.

"In the vast majority of cases, positions will remain, although they may move from the public sector to the private sector.

"This strike is unwarranted, it's illegal and I'm calling on all health care workers, if they've walked out, to get back to work."

About 175 workers at the Royal Alexandra Hospital in central Edmonton refused to go into work Monday. Around 100 workers have also walked off the job at the Foothills Medical Centre in Calgary and the South Health Campus in Calgary.

Susan Slade, an AUPE vice-president, said "several hundred" workers across the province were involved in the strike at sites including the University of Alberta Hospital, the WestView Health Centre in Stony Plain and the Cold Lake Healthcare Centre. 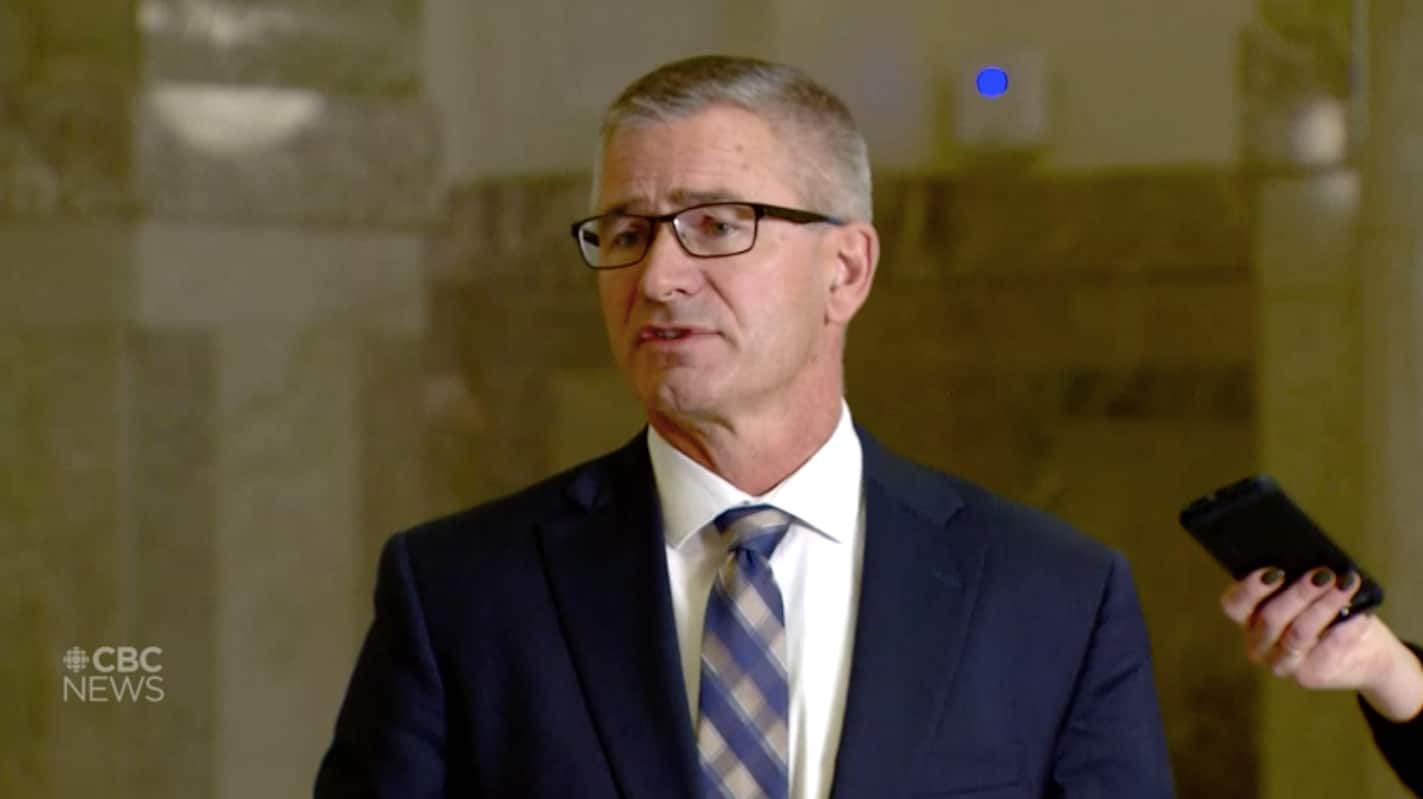 3 months agoVideo
2:18
Finance Minister Travis Toews said the strikes have put the health and wellbeing of patients at risk and warned the workers involved "will be held accountable." 2:18

In a media statement, AHS said all sites remained open but some surgeries and ambulatory care clinics were being postponed.

It said it was redeploying non-union staff, including managers, wherever possible to cover for missing staff. AHS said it had reached out to staff to ask them to return to work.

"AHS is responding quickly to illegal strike action by [AUPE] staff at various sites across the province," the statement said.

AUPE president Guy Smith said the walkout was not authorized by the union but the union supports its members' right to strike.

"From what I understand, it was the shift that was due to start at 7 o'clock, they refused to go in," Smith said.

"We believe workers have the right to strike at any time to defend their jobs and defend the services to the people of the province. Alberta Health Services may view it differently but we'll deal with that when it comes." 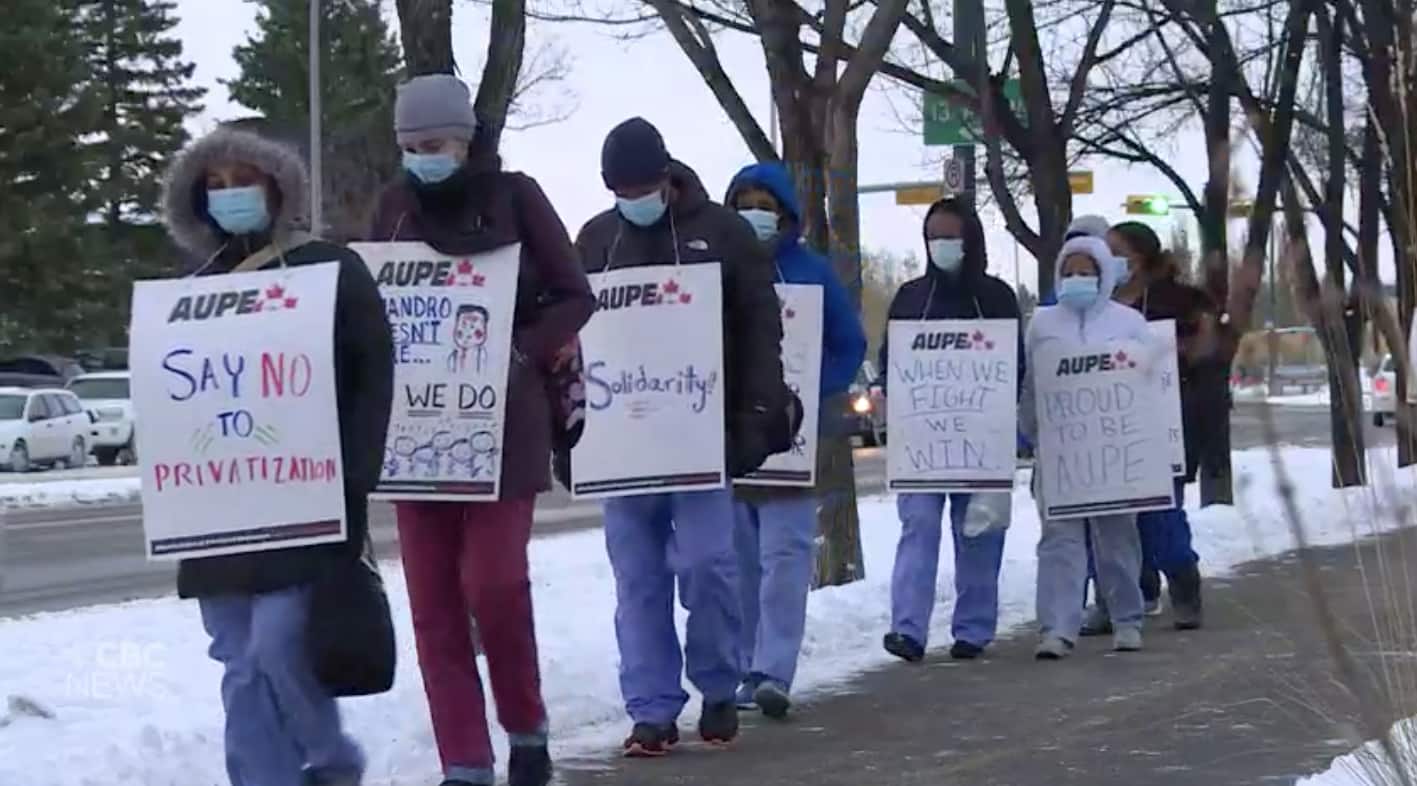 3 months agoVideo
1:18
Most of the workers involved in the wildcat strike are general support service staff who would see their jobs outsourced by the provincial government to private companies. 1:18

The union, which represents more than 60,000 AHS employees including licensed practical nurses, health-care aides, and housekeeping and kitchen staff, accuses the UCP government of proposing "reckless and dangerous" changes to the health care system.

"These workers are on strike to protect their jobs, stop the privatization of health care and deal with workload issues in the health-care system at the moment," Smith said.

"It comes after over a year of frustration and anger at the government which has been exacerbated by the pandemic.

Since the strike action is led by members, not the union, the workers would decide how long the strike continues, Smith said.

Dina Moreira, who works as a porter at the Royal Alexandra Hospital, walked the picket line in Edmonton on Monday.

The work is tough, she said, but critical to the hospital.

"We are essential services and our jobs are very important. And by [Premier Jason Kenney] wanting to roll back and cut our jobs, that's not fair," Moreira said.

"The majority of us are already living paycheck to paycheck, barely making ends meet. And I don't think that's fair of Kenney trying to do that to us. Not at all.

"So that's why we are out here fighting for our rights. We deserve to have a little bit extra savings and we don't have nothing, nothing. We're barely making it."

Bobby-Joe Borodey, AUPE executive vice-president, said workers have hit a breaking point and that the strike would continue for "as long as it takes.

"We're out here to prove a point," said Borodey, who walked the picket line at Foothills Medical Centre on Monday morning. "We want to talk to the government and we want to let them know that we don't appreciate the direction that they're heading in and we're not prepared to go in until they're prepared to work with us."

The wildcat strike comes amid the threat of massive cuts in health care, detailed by Alberta Health Minister Tyler Shandro at a news conference earlier this month.

Between 9,700 and 11,000 AHS employees will be laid off, most of whom work in laboratory, linen, cleaning and in-patient food services.

The jobs will be outsourced to private companies which, Shandro said, will save up to $600 million annually.

During question period Monday, Shandro criticized the NDP for its "hypocrisy" in challenging his government's plan to privatize some healthcare services.

"We have not cut health care," he said. "In fact, we're spending more than the NDP ever did, record amounts in the history of this province and more per capita than any other province.

Unions representing Alberta's health care workers have said there will be major labour strife if the government follows through on the proposed restructuring plan.

The relationship between the UCP government and doctors and health care unions is already severely strained following a series of legislative initiatives.

In late 2019, the government passed legislation that gave it the power to unilaterally terminate its contract with the province's doctors.

The government also passed Bill 32, which placed restrictions on where unions could picket, and how they could use union dues for political purposes. That legislation is being legally challenged by the AUPE, which maintains it is unconstitutional.

On Monday, the Health Sciences Association of Alberta expressed support for the strike. The HSAA represents 27,000 health care workers across the province.

President Mike Parker said HSAA members would not do the work of those on the picket lines.

"Health-care workers have been working tirelessly to keep Albertans safe and they have been rewarded with threats to their jobs by a government that is hell-bent on ripping apart our public health care system," Parker said in a statement.

The Opposition NDP said the government's policies have created "widespread chaos" in the health care system amid the pandemic.

"Jason Kenney's proposal to privatize the work of 11,000 front-line health care workers in the middle of a pandemic will absolutely result in poorer quality health care for Albertans," Leader Rachel Notley said in a statement.