An incredibly rare white pileated woodpecker was spotted this weekend in Bon Accord, Alta. about 40 kilometres north of Edmonton. 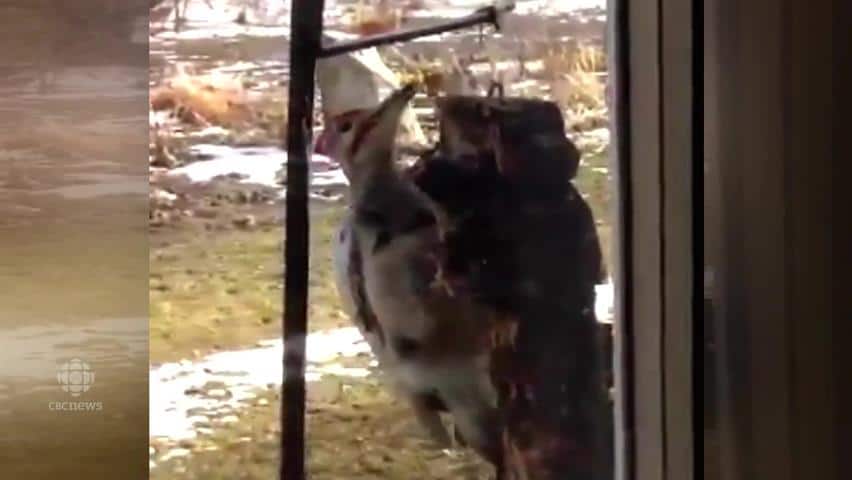 5 years agoVideo
0:32
A white pileated woodpecker was found feeding in Rita and Joe Milligan's yard in Bon Accord this weekend. This is only the third reported spotting of the bird in Alberta. 0:32

An incredibly rare white pileated woodpecker was spotted this weekend in Bon Accord, Alta. about 40 kilometres north of Edmonton.

Rita and Joe Milligan, both avid birdwatchers, spotted the bird as it perched on a feeder outside their window on Saturday, and shot this video.

Joe Milligan, 72, has lived in the area his entire life and never before seen such a creature, and he's not alone.

According to naturalist Brian Keating, only two such birds have been spotted before in Alberta. He theorizes the birds' distinctive colouring is the result of leucism, a genetic condition that causes partial loss of pigmentation in an animal's skin, hair, feathers, scales or cuticles.

Unlike traditional albinism, however, animals with leucism maintain their original dark eye colour.

Typically, pileated woodpeckers are easily recognizable due to their large size (about 400 grams, or the size of a crow), black-and-white bodies and bright red-crested heads.