Wayne Gretzky's nuptials were probably the closest Edmonton has ever come to a royal wedding, and — 30 years later —​ Thierry Marceau couldn't resist recreating all the glitz, glamour and big '80s hair.

Wayne Gretzky's nuptials were the closest Edmonton has ever come to a royal wedding. Thirty years later, Thierry Marceau couldn't resist recreating the event, complete with all the glitz, glamour and big '80s hair.

Marceau, a Montreal-based performance artist, has been transforming himself into The Great One for years.

For his upcoming exhibition The Great One's Back, Marceau orchestrated a fake wedding ceremony, re-enacting the 1988 marriage of the hockey superstar and American actress Janet Jones down to the last diamond-encrusted detail.

"We had attention but there was no publicity for the shoot so it was only people in the street that saw it," Marceau said in an interview with CBC Radio's Edmonton AM.

"It was sort of underground but when we got in the carriage, people were honking in the street." 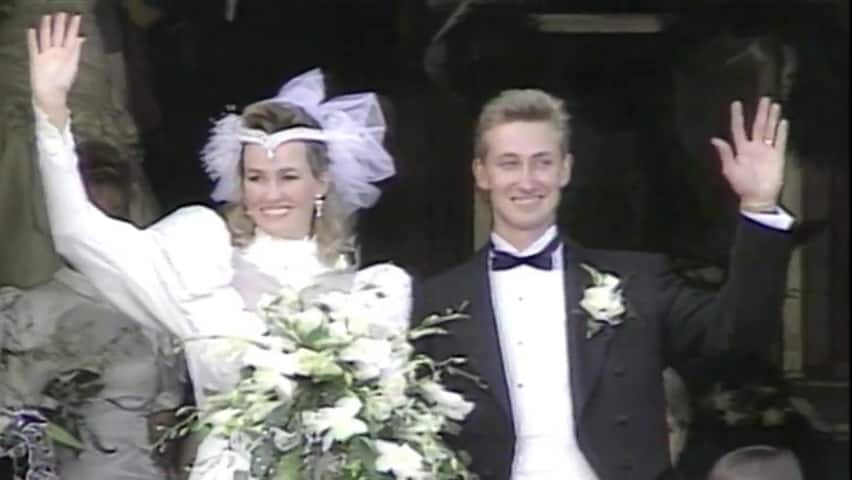 With a bejeweled bride by his side, rolling through the streets in a white carriage, Marceau — dressed in tails and a mullet wig — played the leading man.

Of course, Gretzky's real wedding marked the end of an era for fans of the Edmonton Oilers.

Less than a month after the July 16, 1988 ceremony, news broke that Gretzky had been traded to the Los Angeles Kings.

"It was pretty exciting to do it in Edmonton because I think it really means something really special here," Marceau said of the wedding re-enactment.

"We crossed the whole city and we had a good reaction. People remember Wayne."

Footage captured during Tuesday's wedding shoot will be used in Marceau's Saturday night performance inside the Art Gallery of Alberta during the Nuit Blanche festival.

The exhibition focuses on the most notable and most highly publicized moments in Gretzky's career, including his final Oilers press conference and the back injury that nearly ended his career.

Marceau said his art is all about exploring celebrity culture, and Gretzky's status in the collective Alberta memory made him the perfect case study.

"I was really interested in terms of how everything works in terms of building such a big icon," Marceau said.  "We flash on parts of his life that really meant something.

"I also imagined his bachelor party, the press conference when he was traded away from Edmonton, his back injury, the glory and the rise of his number and becoming almost a god in the collective memory."