An Edmonton man who says he was just trying to do a "good deed" is angry about getting a $543 ticket for warning motorists about a speed trap.

An Edmonton man who says he was just trying to do a "good deed" is angry about getting a $543 ticket for warning motorists about a speed trap.

Salim El-Daccache was given the ticket for stunting on Feb.16 after he held up a handwritten sign with the warning "Laser slow down."

He and a friend spent about two hours outside St. Phillip Elementary School last Thursday morning, holding up signs to warn motorists there was a speed trap ahead.

The first police officer showed up just before noon.

El-Daccache said he didn't think he had to give the officer his name or identification, because he wasn't in a vehicle. He said he started to record the encounter on his phone, because he'd had a bad experience with police once before.

At the start of the video, the police officer mentioned the words "stunting as a pedestrian" and took the sign away.

"I'm going to seize this sign as evidence, and I'm going to need to see ID from you," he said.

"How is that stunting?" El-Daccache asked at one point.

Then came a lengthy debate between the two men and the officer. 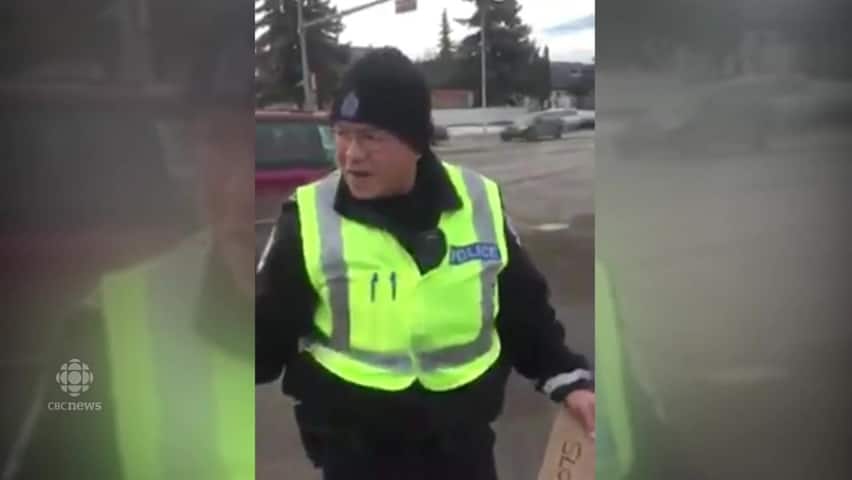 4 years ago
4:08
Edmonton police gave Salim El-Daccache a pedestrian stunting ticket for holding a sign with 'Laser slow down' on it. 4:08

The officer warned: "If you lie to me about your name, I'm going to arrest you for obstruction. And that's criminal."

The friend then gave the officer his name and address.

Another police car pulled up at the corner of 87th Street and 144th Avenue. The second officer got out and asked El-Daccache for identification.

El-Daccache said he didn't have ID on him.

There was more debate about what constitutes stunting, and how holding up signs could distract drivers.

Eventually El-Daccache was arrested. At that point, the video stopped.

Arrested and put in back of police car

El-Daccache said he managed to get his phone into his pocket before he was handcuffed.

He said he was held in the police car for about 30 minutes, then released with the $543 stunting ticket.

Edmonton police told CBC in an email that El-Daccache was stepping on and off the road, impeding traffic. The officer was concerned for the young man's safety, particularly over the lunch hour when there was increased traffic.

El-Daccache denied being on the road.

"Why would I go out there to jump on the road and wave a sign around, right?" he said. "Like common sense, I'm not going to hurt myself."

Giving people the message to slow down

He said he wasn't trying to deprive the police of revenue from speeding tickets.

"It's just to give the message and do a good deed for the city. It's like, actually, giving the message for people to slow down and not rip through the laser zone."

​El-Daccache, who is unemployed, said he plans to fight the ticket in court.

He also said he doesn't plan to try to warn drivers about speed traps again.