There are so few in Canada that most people who see a Super Bugger for the first time probably take a second look. Now a couple in Rimbey, Alta., has decided to sell one of the rare beasts. 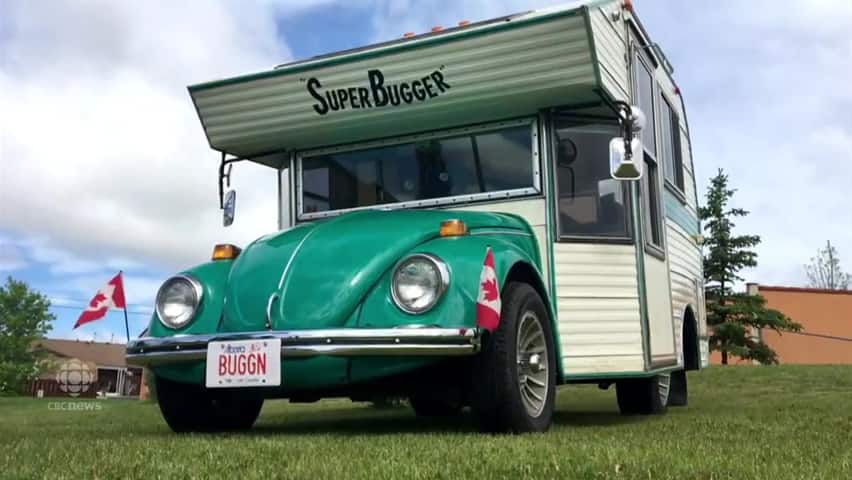 4 years agoVideo
1:58
A rare Volkswagen Beetle converted with a camper kit on the streets in Rimbey, Alta. 1:58

There are so few in Canada that most people who see a Super Bugger for the first time likely take a second look.

Now a couple in Rimbey, Alta., has decided to sell one of the rare beasts.

"We try to tell people, if you took a camper off the back of a truck and stuffed the nose of a Beetle on it, that's kind of what it looks like."

More than 25 years ago, Rimbey resident Don Speer bought the Super Bugger in Arizona. It made its way back to Alberta slowly, because even then people liked to box it in on the highway so they could take photos.

Glenna Spelrem fell in love the moment the SB arrived in her Alberta town.

"I got to drive it in the parade," she said. "Even now, when we take it out and about, it's just one of those things that makes you feel really fun inside."

Speer kept the converted Volkswagen as a personal vehicle and never put it up for sale.  When he died, Super Bugger was put up for auction in 1997. The Spelrems knew if someone else bought it, they might never see it again. They made sure that didn't happen.

It has taken more than 400 hours of repairs and touch ups over the past 20 years to keep Super Bugger on the road. The Spelrems used to take it out camping, but so many people would wander over to gawk they wouldn't get any privacy.

Every time they took a ride, other drivers would crowd them on the road to get a better look.

"If you could read lips, some of the things that people say as you go by," Glenna Spelrem said. "We had taken it to Red Deer one night, and it's like swear words, but like, holy cow! What is that?"

They sometimes took it to car shows and events so people could see the vehicle they loved.

"The kids think that it's cool but it's the adults that I think have grown up with the Beetles and the Beetle phenomenon that are just like, 'Wow, that is amazing," she said.

The nose of the Volkswagen Beetle holds the spare tire. The engine is in the back. The two bucket seats swivel, though you might have to remove the steering wheel to get the driver's side to turn. Above the engine is the kitchen table, which can be adjusted to make a bed. To use the sink and stove, you have to sit at the table. There is no refrigerator but the ice box, made of polished metal, doubles as mirror.

Over the years, the Spelrems haven't been able to take the Super Bugger out as often as they would like.

"We have had good intentions, but life's been busy," he said. "Twenty years later and you keep thinking, well, next year. And next year goes and you realize that it hasn't gone out again."

Now they're selling Super Bugger, and hope the new owner will devote the time it requires.
CBC's Journalistic Standards and Practices|About CBC News