This isn't your dad's 8-track: vinyl stands the test of time

When Todd McLean opened his own vinyl record pressing operation in Edmonton just over a year ago, he was fulfilling a lifelong dream of becoming a part of the music industry.

'Tis the season for giving! That's why we're bringing back some of our favourite stories from 2019. This story was originally published on April 10. Enjoy!

For Todd McLean, there is no better physical format for music than a vinyl record.

It's a ritual to unseal a record, put it onto a turntable, clean the stylus, drop the needle and sit back to listen.

"It becomes an event, an experience all on its own," said McLean, owner of Edmonton's Moonshot Phonographs.

While vinyl doesn't have the "pristine purity" of a compact disc, McLean said the ear searches for the imperfections and warmth you get from listening to an LP (long-playing record).

When McLean opened his vinyl record-pressing operation in Edmonton just over a year ago, he was fulfilling a lifelong dream of becoming a part of the music industry.

He has always loved taking in shows, finding out how the music is made and listening to it on vinyl. He'd go to the merchandise table after every show but wasn't always able to buy the records he wanted from smaller, independent artists.

Watch: An Edmonton man used his passion for music to open his own vinyl record-pressing operation. 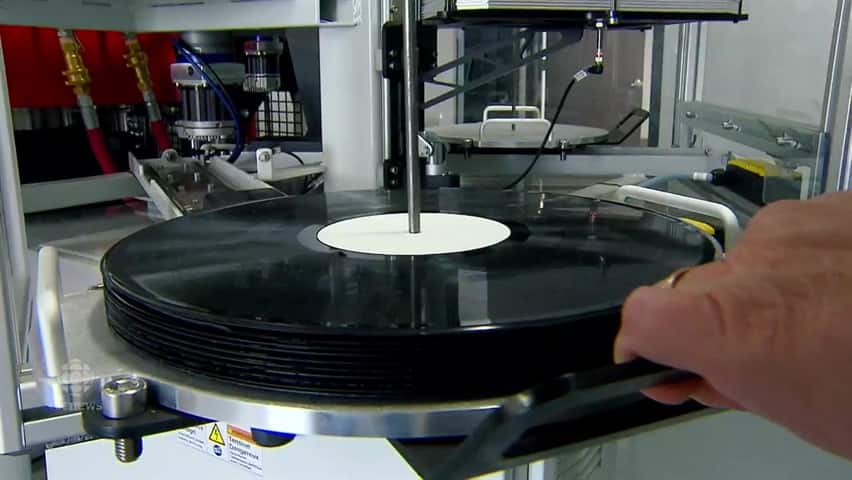 2 years agoVideo
2:19
Todd McLean is taking his love of the LP and reviving the record in Edmonton. 2:19

"There were so many different stories about why they didn't have vinyl. Their orders were not done on time, the quality was so poor … or their orders were bumped by artists of greater stature," McLean said.

"I saw that as a terrible lost opportunity for an up-and-coming band or singer-songwriter to make a go of it."

Around the same time, McLean discovered Viryl Technologies, a Canadian company developing what he described as "the first new record press technology in 40 years."

When he saw the machine for the first time, he thought: "This is what I need to do. This is going to be my part."

McLean set out to learn everything he could about record pressing and then opened Moonshot Phonographs in an industrial space in south Edmonton. It was one of the few locations that could house and provide the power needed to operate the beefy pressing machine.

CDs began to eclipse vinyl records in the 1980s and by the end of that decade the smaller, more portable discs had all but overtaken the dying format. CD sales surpassed vinyl in 1988 and compact cassettes in 1991.

When McLean first opened his business, people asked if he was worried the current popularity of vinyl was a trend that would eventually go out of style, rendering his business useless. But McLean never worried about that risk, instead choosing to believe that "it's back to stay."

He points to 2007 as the year that vinyl's popularity resurged.

"It's still at that same pace, it hasn't slowed down. We don't know where the ceiling will be … it's now over a billion-dollar industry worldwide and the growth is still happening," McLean said.

"I think vinyl has come back partly due to the intrinsic value that music has, and those like myself, who find music indispensable to life, know that it is worth more than being streamed or downloaded for free."

McLean's all-time favourite record is Boston's Third Stage, out in 1986.

"It was Boston's third album … and there was a lot of movement towards digital sounds and digitally created instrumentation.

"Tom Scholz from Boston was very proud of the fact that he had used all of this analog equipment and pieced things together … so I have this memory of that album and how he was a throwback in his own time."

'A little bit of magic'

When it comes to actually pressing the records, McLean said there's no science to developing that signature rich, warm sound. It depends on variables, and there's a lot that can go wrong.

"There's a little bit of magic involved in getting music imprinted onto vinyl," McLean said.

Moonshot Phonographs is heading into its second year of business. McLean has worked on projects for artists across Canada and the United States, and one from Mexico.

The bulk of that work stems from local artists like Joe Nolan, Postscript, Captain Tractor and Maddie Storvold.

On Saturday, McLean is opening the doors of his business to the public for the first time. People will be able to see the record press and how the LPs are made. The event is at 9946 67 Ave NW in Edmonton from 2 p.m. until 6 p.m.

April 13 is Record Store Day, an annual celebration of independent record stores all over the world.

More information on the event at Moonshot Phonographs is available here.