‘It would bring a lot less stress on our doctors and on our hospital systems,’ says Fort McMurray mother

The groups say midwifery services are being stretched too thin and that too few communities have access to them.

Mothers like Rachel Bayes left Fort McMurray to find a midwife and give birth. She wanted the personal care a midwife can offer throughout a pregnancy, as well as during and after childbirth.

The alternative, Bayes said, would mean giving birth with an obstetrician she may have never met.

"Being able to have my baby in a non-hospitalized environment where I could be comfortable, where I could be relaxed, that was very important to me," Bayes said, cradling her six-month-old daughter, Arwyn.

Stephenson's organization, along with Peace River's Birth Matters for Peace Parents, and the MaternityCare Consumers of Alberta Network in Grande Prairie, have begun working together to demand more government funding for midwifery in the region.

The groups say northern Alberta wasn't allocated any additional midwives for the 2016-2017 year.

Of the approximately 100 midwives in Alberta, only three practice in northern Alberta, they said.

Alberta Health Services confirmed that in northern Alberta, one midwife is based in High Level and two more are based in Lac La Biche.

Sean Chilton, vice president of AHS's health professions and practice, said the health authority has placed Fort McMurray as a high priority for midwives in 2018.

"We recognize there is a need — there is a need to improve access for those seeking the care of midwives," Chilton said. "And as an organization, we remain committed to that." 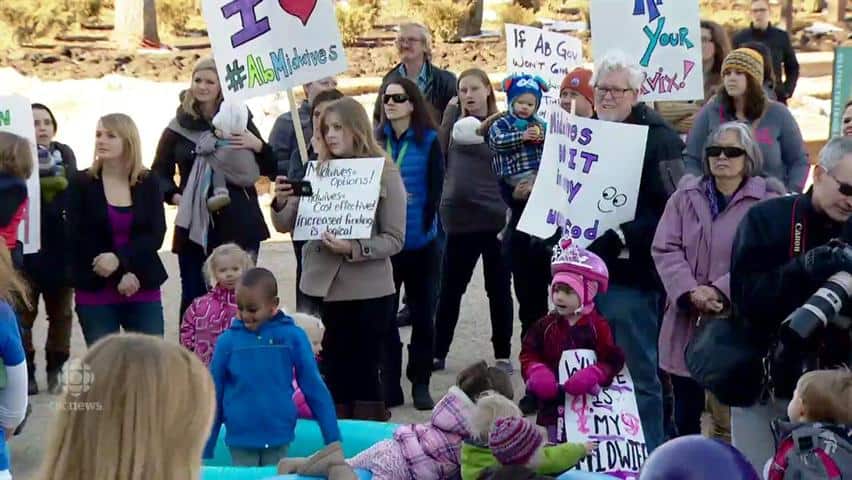 Midwife supporters rallied at the legislature to fight for more funding

5 years ago
1:20
Those advocating for midwives gathered at the Alberta legislature Wednesday calling on the government for more funding and support. 1:20

Chilton could not say how many midwives would be hired in northern Alberta, nor how many patients these new hires would take on.

Bayes said she just hopes the health authority follows through as not everyone can afford to drive out of town and rent hotels to meet with a midwife.

"I would ask that they bring midwifery care to the northern communities of Alberta," Bayes said. "It would bring a lot less stress on our doctors and on our hospital systems."