The most northerly Islamic garden in the world took 10 years to plan and 18 months to build.

'This is a garden like you get once in a lifetime'

The Aga Khan Garden is like no other space in Alberta.

It's "a place of peace, a place open to all people, a place that welcomes different cultures and a place that gives a ... nod to the placement of humans in nature," says Lee Foote, director of University of Alberta Botanic Garden.

Foote calls the garden his "baby" and can't help but beam as he tours media through the new attraction.

"This is a garden like you get once in a lifetime. I'm tremendously proud of the garden and the people that run it," said Foote.

The 4.8-hectare Mughal-inspired landscape containing 25,000 plants, trees and shrubs, required close to a decade to plan and 18 months to build.

None of it was possible without a $25-million donation from the Aga Khan, spiritual leader of Ismaili Muslims, Foote said.

"To us he's a grand donor and a kind gentleman," said Foote, who is hoping the Aga Khan will return to Alberta for a celebration of the space in 2019.

The garden, southwest of Edmonton on Highway 60, officially opens to visitors Friday.

Foote anticipates the new attraction will more than double the number of visitors from 75,000 to 160,000 to the 97-hectare garden first established in 1959.

The Aga Khan Garden has surprises for all the senses, Foote said.

Whimsical features like bronze salamanders and frogs are hidden among the fountains and green spaces.

The Islamic garden, being the most northerly in the world, presented Todd Gesshe, senior horticulturist at the University of Alberta Botanic Garden, with some unique challenges.

Gesshe had to carefully select hardy perennials able to withstand the climate.

"We've got purples, blues, yellows, pinks, reds, all sorts of colours represented, stuff for the bees, eye candy if you will, even some native plants to this area," Gesshe said.

The opening of the garden to the public this long weekend doesn't mean Gesshe's work done.

"A gardener's work is never done. We'll always be tweaking. That's the beauty of this," he said.

"It's still such a new young garden and we have so much to learn."

You can see more on from the University of Alberta Botanic Garden in the annual attractions edition of Our Edmonton Saturday at 10 a.m., Sunday at 1 p.m. and Monday at 11 a.m. on CBC TV. 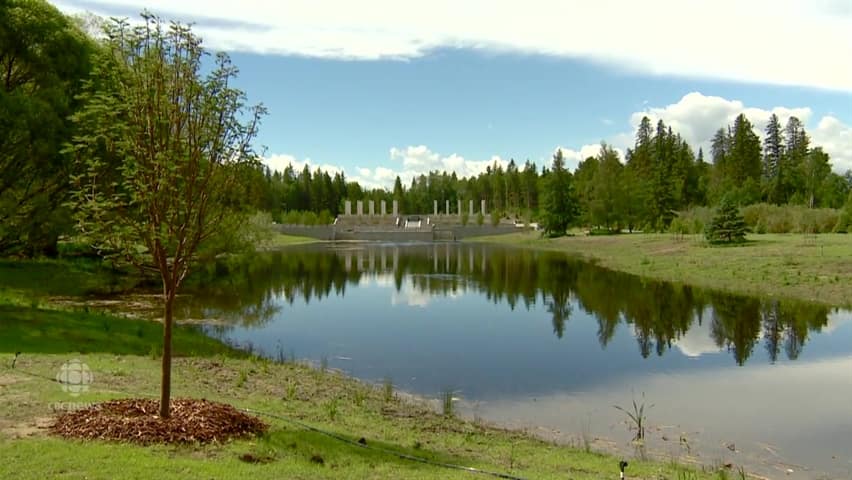 'This is our oasis'

3 years agoVideo
3:49
Lee Foote, the director of the University of Alberta Botanic Garden, gives us a guided tour through the new Aga Khan Garden. 3:49