Netanya Cummings is urging the University of Alberta to install surveillance cameras near the entrances of parkades, after her car was vandalized April 11, while she was in class.

A University of Alberta student, who was involved in a frightening incident with another motorist en route to school before her car was vandalized while parked on campus, is urging the U of A to install surveillance cameras near the entrances of parkades.

Netanya Cummings believes the two April 11 incidents — the road rage incident and the subsequent vandalism — were connected but there is no way to prove it.

"I was just devastated," Cummings said about the incident in which one car side mirror was smashed, another one ripped off and long, deep scratches were etched into the side panels of her car.

"I couldn't understand why someone would go to that extent," added the 19-year-old neuroscience student.

The student said she attempted to pass an SUV on Groat Road, but the driver would not allow her to make the manoeuvre. Instead, the male driver aggressively blocked her car.

"My only goal was to get away from him as quickly as possible."

She says the driver followed her to a parkade on campus. Cummings parked her car and went to class.

She discovered the damage about three hours later.

Cummings reported the incident to police and campus security. 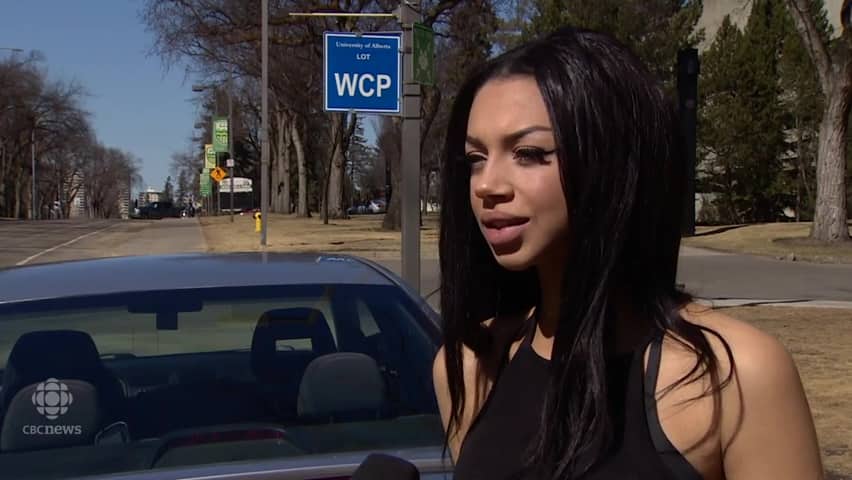 'I was just devastated'

3 years ago
0:53
Netanya Cummings talks about a road rage incident and her vandalized car. 0:53

Surveillance cameras are not currently installed in the parkades on campus, said Marcel Roth, the acting manager of the University of Alberta's protective services.

Roth told CBC News that the incident involving Cummings' car was taken seriously, and measures were offered to make her feel safe, such as changing parkades.

He said installing surveillance cameras in the parkades on campus would be considered if property crime became a bigger problem.

"If there was a criminal trend, or some kind of concerning trend, we would initiate that re–evaluation," said Roth.

Roth said that since January, there have been seven reported cases of mischief in the University of Alberta's parkades.

`Really important that we feel safe

Without witnesses or surveillance tape, Cummings can't prove that the person who vandalized her car is the same man, and she hopes the university will consider investing more in security.

"I think it's really important that we feel safe on campus," said Cummings.

"If that requires camera surveillance, or even more campus patrolling, I would be happy with that."

Since the incident, Cummings now takes a different route to school. She's also changed the way she drives.

"I'm a lot more cautious, I give people a wide berth," she said.