U of A students' satellite to monitor space weather

​A little satellite built by a group of University of Alberta students will supply information that could one day prevent damage from solar flares.

​A little satellite built by a group of University of Alberta students will supply information that could one day prevent damage from solar flares.

The AlbertaSat cube satellite, which is about the size of a breadbox, will measure the effects of space weather. It's scheduled to be launched on a supply rocket to the International Space Station later this month.

Charles Nokes, a masters student in space physics who has been working on the satellite since he was an undergraduate in 2013, says the satellite will examine the energy from the sun and its interaction with the earth's ionosphere.

Solar flares produce the Northern Lights, but can also cause costly and disruptive damage to electrical and electronic equipment.

Nokes says the satellite will be among dozens of other little satellites from other teams that are part of the QB50 project. They will be launched on the same rocket and will also measure space weather.

He says cube satellites are based on a universal 10-centimetre-square box standard that was developed at the end of the 1990s at California Polytechnic.

"Anybody in the world can follow the documentation that lists the standard and then pretty much every launch company in the world has some way of accommodating this kind of spacecraft," Nokes explained.

"You can stack them, too," he added. "Universities especially have caught on to this."

Nokes said there's still a lot that scientists don't understand about the effects of solar flares.

One of the most powerful geomagnetic storms happened in 1859 and is known as the Carrington Incident. According to an article on NASA's website, telegraph operators received electrical shocks and their telegraph paper caught fire. 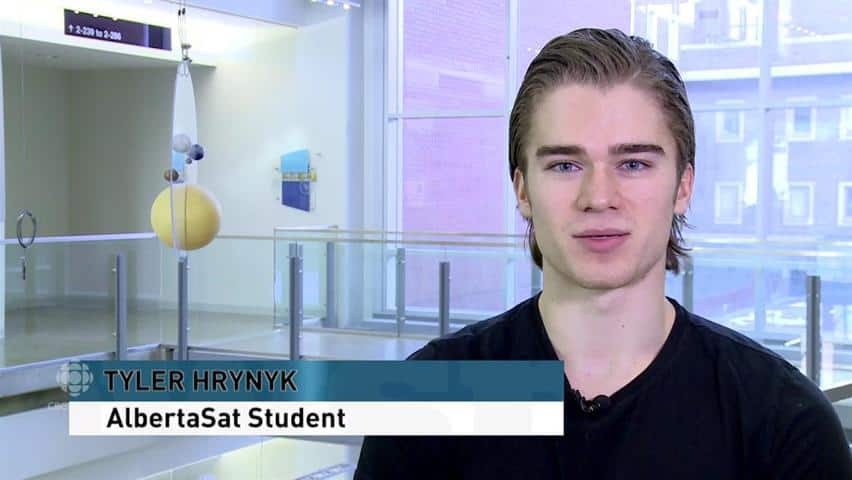 5 years ago
2:08
A team of students from the University of Alberta are preparing to launch the first-ever satellite built in Alberta. 2:08

"That amount of energy can sometimes be so powerful that it penetrates all the way down to the ground, and because of all the infrastructure that we have that's reliant on electricity, that can have a very real impact," Nokes said.

Fifteen countries from five continents are involved in the QB50 project. The satellites will study space weather from nine to 15 months.

From the ground up

At the University of Alberta, the project has been going for seven years and involved approximately 50 students and faculty.

Nokes said the designers weren't experts in the beginning, but have become ones as they've worked.

The launch at Kennedy Space Centre in Florida was supposed to happen March 19, but a delay with the rocket has pushed the date back to March 21.

About a dozen of the Alberta group are planning to see the launch in person, while the rest will watch it live on NASA TV.