Kean Littlechild starts prepping food in the Ermineskin Junior High School kitchen hours before the other students fill the halls. The Grade 12 student doesn’t mind, he loves the work. 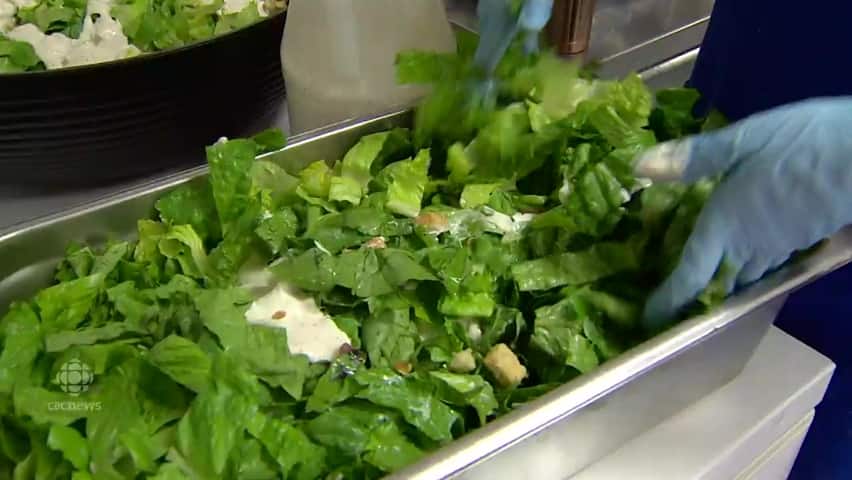 'Day 1, we needed to feed everyone'

2 years ago
1:41
School board members at Maskwacis started a program to give all 2,150 students healthy breakfast and lunch options. 1:41

Kean Littlechild starts prepping food in the Ermineskin Junior High School kitchen hours before the other students fill the halls. The Grade 12 student doesn't mind, he loves the work.

"I just enjoy being in the kitchen," Littlechild said. "I enjoy the environment, it makes me feel good. Plus, I love food."

A group of 45 students work in the school's commercial kitchen. They prepare breakfast, lunch, and snacks for the other schools on the Ermineskin Cree Nation, in Maskwacis, Alta, about 95 kilometres south of Edmonton.

Charlie Roasting is another Grade 12 student who participates in the program. At first, he didn't realize the impact his work was having.

"It's kind of amazing that I'm feeding a bunch of kids that really love the food we cook," he told CBC News.

The healthy meals change daily, and always include salad and fruit options.

"We use whole ingredients, and we buy everything as local as possible. The students make everything from scratch," explained Scott Hall, director of the Universal School Foods Strategy, or Nanâtohk Mîciwin in Cree.

The program was expanded to every school in Maskwacis at the beginning of the current school year.

"The community in Maskwacis really desired to feed everybody from kindergarten to Grade 12," Hall said. "It's a Cree value to provide for your community."

On the Samson Cree Nation, another group of high schoolers prepare food for their respective schools.

Staff are responsible for meals on the two nations that don't have a high school, Montana First Nation and Louis Bull Tribe.

In total, 2150 students receive free meals during the school year.

"I learned to prep food and to safely chop it without getting your fingers chopped, and to wear gloves and wash your hands when preparing food," Roasting said.

Those skills are useful in life, and also highly transferable to a future career in the culinary industry, Hall said.

The students who take part in the program also become more confident, he added.

"Kitchens are places of high pressure, and pressure tends to build people up."

Roasting and Littlechild are both interested in pursuing careers in the culinary industry.

"It's something that I want to do for the rest of my life," Littlechild said. "I think being a chef is pretty interesting, you can go anywhere and you learn a lot of things."

He wants to introduce more people to Cree cuisine.

"We have this dish called raisin soup, it's one of my favourite soups so I'd definitely serve that. And obviously serve bannock all the time."

The Universal School Foods Strategy began five years ago at the Ermineskin Junior High School and gradually expanded to the elementary school.

Then the Maskwacis Education Schools Commission (MESC) was officially launched in July 2018. It consolidated the school boards that were overseeing education in each of the four First Nations that are part of Maskwacis.

The amalgamation allowed MESC to expand the Universal School Foods Strategy to the 11 schools that are now under its control.

Each meal cost about $0.75 and is paid for through MESC's operational budget.

The program is part of a strategy that aims to increase student success, said Brian Wildcat, MESC's Superintendent.

"Part of that is to make sure that they're well fed, and eating nutritious healthy food," Wildcat said.

"We know that when you do that, you have a better chance of being successful in your learning, so for us it was an easy decision to support something like this."

Attendance rates have improved at the Ermineskin Junior High School since the launch of the program, he said.

"We did have some steady increases in our graduation rates over that time," Wildcat said. "Food is connected to do that. You can't do a direct correlation, but it played an important role."

The impacts of the universal food program are felt beyond the school, said Tamara Wildcat, who sits on MESC's board of governors.

Relationships between students and school staff have improved since they've started sharing meals.

The program also helps parents who may not be able to afford healthy food, she said.

"It's all about support. It has helped a lot of families financially," Wildcat said.

"There's fairness, there's equality. No one is without."

The success of the Universal School Foods Strategy demonstrates what can be achieved when Indigenous people are in control of their own education system, she said.

"For too many years, we were always told what to do, and it didn't always coincide with how we wanted to do things," Wildcat said.

"This is our own program, we wanted it. Working together ensures success."

Josee St-Onge is a journalist with CBC Edmonton. She has also reported in French for Radio-Canada in Alberta and Saskatchewan.