‘It’s the ugliest cat I have ever seen ... but the cat really does have a heart of gold’

Some say Sami has a face only a pet owner could love.

"It's the ugliest cat I have ever seen," said co-owner Jay Telegdi. "Like, hands down.

"But with that being said, the cat really does have a heart of gold and it is super sweet, affectionate and unique in many ways."

Sami is a Persian cat with long white hair and patches of orange. The cat's snaggleteeth and swollen cheeks, caused by an overgrown tear duct, accentuate the breed's normally flat face.

Still, it's a rare cat that has a Twitter account and a hashtag. CBC TV's Still Standing will also feature Sami in their upcoming summer show.

Now he has his own T-shirts, which Telegdi and his roommate, Peter Fortna, are selling to raise money for Syria through the Red Cross.

The two hope to use the cat's "celebrity" and hard-to-look-at-but-hard-to-look-away face to raise money for a campaign called Be Kind.

"He's one of a kind," Fortna said. "You know, he's always depended on the kindness of others, and that's what the folks of Aleppo are hoping for."

The seven-year Syrian conflict is one of the biggest human displacements in the world today. Estimates are that four million people have fled to neighbouring countries.

Aid agencies continue to sound the alarm about the need for humanitarian support. Many displaced inside and outside Syria don't have access to food, electricity or heating. The Red Cross estimates there are about 13.5 million people who need aid.

Sami's own story, his owners say, started in Romania, where his first owners tried to drown him in a river — inside a bag full of rocks — because he was so ugly.

The cat was saved and came to Canada with his new owners. First, he had to be evacuated during the 2013 Calgary floods. Last May, the cat joined a mass exodus when wildfires encircled Fort McMurray. 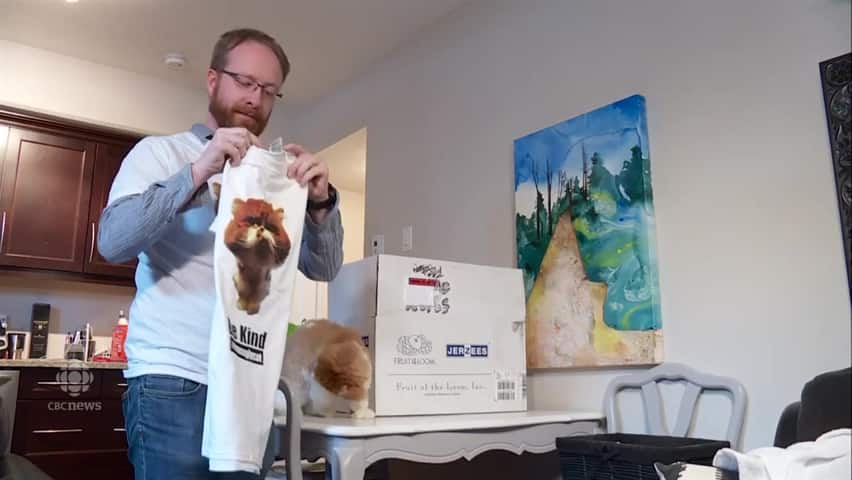 4 years agoVideo
1:37
Peter Fortna is selling a shirt with his cat's face on it as a fundraiser for people fleeing their homes in Aleppo, Syria. 1:37

The May wildfire forced the evacuation of 90,000 people. By the time it was over, the forest fire had destroyed more than 2,700 homes, including the one where the roommates lived.

Sami has already used up three of his lives "that we know of," Telegdi said. "So we like to say around our house that it's not just Fort Mac Strong, it's also Calgary Strong and Bucharest Strong."

The whole ordeal inspired the fundraiser and helped them understand what it's like to be without a home.

"We just thought, is there a way we can help those people with their recovery?" Fortna said.

The T-shirts are being sold for $20 each through the YMM for Aleppo Facebook page.