United Conservative MLA Angela Pitt says she and members of the UCP caucus left a debate on no-protest zones around abortion clinics Tuesday because she was being attacked by the NDP. 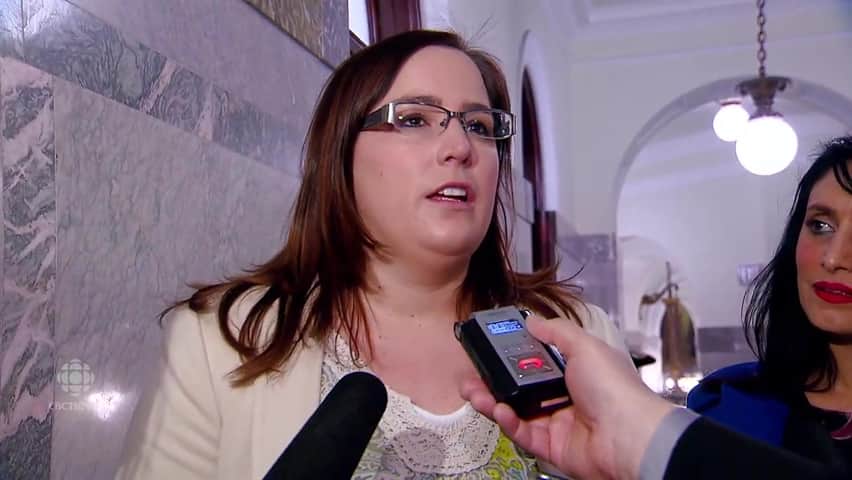 'They were extremely rude and belligerent'

3 years ago
1:55
UCP MLA Angela Pitt explains why the UCP caucus walked out on the debate on abortion clinic safe zones on Tuesday. 1:55

United Conservative MLA Angela Pitt says she and members of the UCP caucus walked out of a Tuesday debate on no-protest zones around abortion clinics because she was being attacked by the NDP.

Pitt, the MLA for Airdrie, claimed NDP MLAs used language that was "extremely vulgar" after she spoke out against the bill.

"They were extremely rude and belligerent and just acting very unparliamentary in there, I would say, and we're refusing to participate in that."

Pitt said the heckling occurred as she stated her intention to abstain from voting while speaking against Bill 9 after it was introduced for second reading late Tuesday afternoon.

A recording of the proceedings includes the voices of hecklers as Pitt was speaking, but it isn't clear what the hecklers were saying.

If passed, Bill 9 would prohibit protesters from coming within 50 metres of the Kensington Clinic in Calgary and Women's Health Options in Edmonton. It also prohibits protesters from taking audio, video or photos of anyone entering and exiting the clinics.

When the bill was introduced last week, Health Minister Sarah Hoffman said the bill was to protect women from being harassed while trying to access publicly funded health care services.

When asked on Wednesday about Pitt's contention that she was inappropriately heckled, Hoffman said: "I imagine some members may have gasped when they heard some of the things that she said, but I don't recall heckling."

Do your job, MLA says

On Monday, UCP Leader Jason Kenney gave notice that he and most of the caucus would abstain from voting on the bill.

Kenney contends the bill is unnecessary as the clinics have had injunctions in place for years against protesters. He calls Bill 9  an attempt by the provincial government to distract from its economic record.

But some people on social media have accused Kenney and the UCP of being cowardly by not voting against the bill if they are opposed to it.

"I'm sorry to disappoint the over-caffeinated lefties on Twitter," Kenney said, "but they will not govern the political approach of the Official Opposition."

Kenney said the caucus is concerned about women's safety.

Calgary Elbow MLA Greg Clark was in the legislature when Pitt and the other MLAs walked out. He said their actions were inappropriate.

"Regardless of what you think of the issue, your job as an MLA is to be in the House," he said.

According to Pitt, UCP MLAs will remain in the House for debate during later stages of the bill, but they will not participate.