After Trump's 'herky jerky,' a handy guide to handshakes

When Justin Trudeau resisted Donald Trump’s attempt at strong-arming - it was a handshake so awkward it triggered a wave of hand wringing around the world.

Are handshakes a must for meetings or an absolute menace?

When Justin Trudeau resisted Donald Trump's attempt at strong-arming, it was a handshake so awkward it triggered a wave of hand wringing around the world.

Photographs of the two leaders at the White House earlier this week showed Canada's prime minister shooting a queasy glance at Trump's outstretched hand, an incident described as "legendary" and "bizarre."

Trump is quickly becoming the poster boy for cringe-worthy handshakes, after grabbing the hand of Japanese Prime Minister Shinzo Abe and clinging on for an agonizing 19 seconds, punctuated by a couple of tugs.

Given all the recent head scratching about handshaking, Edmonton AM took a closer look at the ancient custom.

Joanne Blake, who has spent most of her career teaching people how to shake it but don't break it, said Trump's aggressive grip was a lesson in bad manners.

"It needs to be firm, but not bone-crushing," said Blake, the co-owner of Business of Style, a business etiquette company based in Edmonton.

"In our sessions, we actually describe four different handshakes. And Trump's is not one of those. I call it the herky jerky. It's a new one."

The "Trumpshake" has a jerky motion, after which he generally plants his feet and pulls his counterpart towards him, their outstretched hand clutched in a death grip.

"It's very peculiar, as you can see from the expression of the leaders who are on the receiving end of it," Blake said in an interview with CBC Radio's Edmonton AM.

'A good handshake should not be memorable'

Those looking to make a good first impression should look to the American president for an example of what not to do, Blake said.

"A good handshake should not be memorable. You want to walk away from that exchange remembering the person, not that they crushed you." 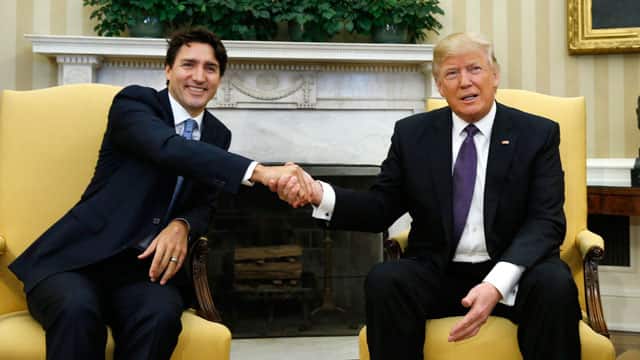 4 years ago
1:34
U.S. President Donald Trump's handshake has gained a lot of recent media attention, and without fail, it was again the centre of attention during his visit with Prime Minister Justin Trudeau 1:34

Tom Fath empathizes with Trudeau's apparent reluctance to clasp hands with the new American president. The Edmonton entrepreneur, who got his start in the construction industry, has sworn off handshakes completely, after experiencing a bone-crusher a few years ago.

"He gave me a handshake that was so hard that it bruised a couple of bones in the palm in my hand," said Fath. "In fact, I could not only feel the bones crushing against each other, but I could audibly hear them.

"After that, any time somebody would shake my hand, and they would squeeze too hard, it would hurt for days."

'It really comes down to hygiene, not handshakes'

Dr. Raj  Bhardwaj said handshakes can even be bad for your health. He's more concerned about bacteria than broken bones.

He said grasping palms can spread germs and pass on colds or the flu.

And if that wasn't reason enough to swear off the gesture, handshakes can act as conduits to spread staph infections or streptococcus bacteria, which can cause skin infections or explosive vomiting and diarrhea.

"There's actually a really fantastic but pretty gross study in 2009, where researchers swabbed the hands of commuters and found that up to 19 per cent were contaminated with fecal bacteria," said Bhardwaj, who says people should wash their hands regularly.

"I think that it really comes down to hygiene, not handshakes."

Usually when Bhardwaj is forced to shake, he quickly bathes his contaminated palms in hand sanitizer.

Like most doctors, he has chosen to forego the handshake whenever possible.

"I fist bump instead, but that's a whole other issue," he said.

"There has been a little bit of research that the French-style 'air kiss' might even transmit fewer germs than a fist bump. But I'm not holding my breath waiting for that to catch on."

With files from Edmonton AM